View a boundary map of the Manistique Harbor AOC 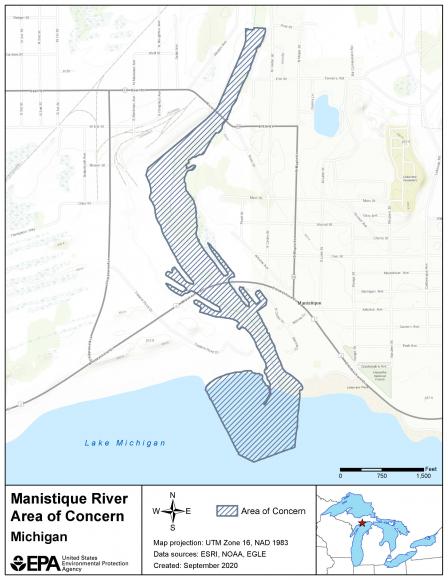 The Manistique River in Michigan was designated as an Area of Concern (AOC) under the 1987 Great Lakes Water Quality Agreement. The Manistique River is located in Schoolcraft County in Michigan's central Upper Peninsula. The river flows southwest through the county and discharges into Lake Michigan at the city of Manistique. The AOC consists of the last 1.7 miles of the river, from the dam in Manistique downriver to the mouth of the harbor at Lake Michigan.

The Manistique Harbor is a deep-draft harbor that has supported numerous commercial and recreational activities since the late 1800s. Most notably, the harbor has been a significant lumber port due to Manistique’s location at the mouth of a largely forested watershed. As a result, sawmills and paper manufacturing facilities developed on the Manistique River have had negative environmental effects. The Manistique River was designated as an AOC due to:

An interim success of remediation and restoration work is removing Beneficial Use Impairments (BUIs). BUIs are designations given by the International Joint Commission, representing different types of significant environmental degradation.

Federal, state, and local partners have made significant progress by implementing numerous monitoring, remediation, and restoration projects with the goal of delisting the Manistique River AOC.

EPA Superfund cleanup activities between 1993 and 2000 removed over 10,000 pounds of PCBs as a result of the removal of 187,500 cubic yards of contaminated sediment and woody debris. The Superfund cleanup objectives were met, but elevated PCB concentrations remained in some areas of the AOC that still contributed to impairments of beneficial uses. Since then, projects have included additional sediment investigations, biological investigations (focusing on PCB bioaccumulation in mussels, fish, tree swallow eggs, spiders and worms), and contaminated sediment cleanup.

In 2016 and 2019 two additional sediment remediation projects were conducted to address the remaining PCB contamination in the AOC. As of November 2019, all remediation and restoration actions identified for the Manistique River AOC are complete. Partners will now focus on assessing the impacts of the final restoration project to the environment in relation to the remaining BUIs. 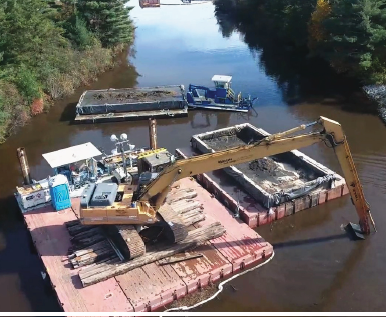 Dredging operations on the Manistique River in 2016.

A $13.7 million, multi-year sediment remediation project was recently completed to address the remaining Restrictions on Fish and Wildlife Consumption and Restrictions on Dredging BUIs.

About 9,400 cubic yards of contaminated sediment and woody debris were removed from Operable Unit (OU) 1 between August and December 2016. OU1 consisted of a pair of bays – North Bay and West Bay – and a private marina. The dredged areas were covered with 6 inches to 1-foot of clean sand. A granulated activated carbon/sand mixture was placed over 108,948 square feet in November 2019 as an additional protective measure.

Some 42,500 cubic yards of contaminated sediment and sawdust were removed from OU2 (lower river and harbor) between June and November 2019. A granulated activated carbon/sand mixture was placed over 211,311 square feet of the cleanup footprint. Final site restoration will occur in May/June 2020.

Funding for this project was provided by the National Oceanic and Atmospheric Administration through the Great Lakes Restoration Initiative. This project was led by the Michigan Department of Environment, Great Lakes, and Energy (EGLE) with oversight by Arcadis (remedial design contractor). Support was also provided by the U.S. Army Corps of Engineers, and EPA. White Lake Dock and Dredge Inc. conducted the dredging operations.