View a boundary map of the Maumee AOC

Located in northwest Ohio, the Maumee Area of Concern (AOC) is comprised of 787 square miles, including several watersheds draining to Lake Erie, making it one of the largest AOCs in the United States.

The Maumee AOC was originally identified as the area extending from the Bowling Green water intake near Waterville along the Maumee River at river mile 22.8 downstream to Maumee Bay.  The area included direct drainage into the waters that are primarily within Lucas, Ottawa and Wood Counties.  The area included the following watersheds: Ottawa River (Tenmile Creek), Swan Creek, Grassy Creek, Duck Creek, Otter Creek, Cedar Creek, and Crane Creek.  In 1992, this area was extended to the east to include Turtle Creek, Packer Creek, and the Toussaint River. In 2010, the AOC was redefined to follow United States Geological Survey’s updated boundaries. This added the headwaters of Swan Creek and Tenmile Creek that are primarily located in Fulton County.

The Maumee AOC has been the site of industrial and municipal development for almost two centuries. For years unregulated waste disposal, industrial contamination from old dumps, contaminated industrial sites, combined sewer overflows and disposal of dredged materials has led to contamination entering the water. The specific contaminants of concern include polychorinated biphenyls (PCBs), heavy metals and polycyclic aromatic hydrocarbons (PAHs). For example, in the Ottawa river, high levels of PCBs and other contaminants resulted in a no-contact advisory for over 25 years. Some areas, such as the Toussaint Wildlife Area, were historically wetlands, but more than 90% of the wetland in Northwest Ohio have been lost due to human activities.

Beneficial Use Impairments, or BUIs, are designations given by the International Joint Commission for an AOC. They recognize various examples of significant environmental degradation. As restoration and cleanup projects make progress, monitoring is conducted at the site to determine the level of recovery in environmental health. If sufficient recovery is reached, BUIs can be designated as “removed.”

Originally, the Maumee AOC had 10 Beneficial Use Impairments (BUIs). One BUI, Added Costs to Industry or Agriculture, was removed in 2015. The nine remaining BUIs, listed below, are impairing waterways that ultimately flow into Lake Erie. Ongoing work within the AOC will address these remaining nine BUIs, and ultimately lead to their removal. In close collaboration with the state of Ohio, as well as local and federal partners, the U.S. Environmental Protection Agency (EPA) has identified the potential for completing all management actions by 2024.

EPA has continually worked with federal, state, and local partners to execute remediation and restoration work in the area to address the existing beneficial use impairments. Efforts towards contaminated sediment remediation and habitat restoration have made significant progress, but there is still much work left to do. There has been one Great Lakes Legacy Act (GLLA) sediment contamination cleanup project completed within the Maumee AOC, the Ottawa River. Current GLLA projects include Swan Creek and Otter Creek. The success of these projects will continue to improve plant and animal populations, help remove BUIs, and contribute to the eventual delisting of the AOC. As the AOC progresses towards delisting, the city of Toledo and the surrounding area will continue to see ecological benefits of a healthy environment and the likely economic benefits that result from an accessible, healthy waterfront. Because of these efforts, those who live in the area have the potential to see an improved overall quality of life tied to restored local natural resources. Highlighted below are a few examples of the many restoration and remediation projects.

Howard Marsh Metropark is a 987-acre property owned by Metroparks Toledo near the Lake Erie Shore in Lucas County. Formerly a coastal marsh, the area was drained and converted into agricultural land more than 75 years ago. Beginning in 2018, Phase 1 converted 732-acres of the property back into wetland habitat including a hydrological connection from the wetland to Lake Erie that enabled enhanced fish passage. Howard Marsh also filters runoff water before it reaches Lake Erie and provides spawning habitat for fish and stopover habitat for birds. The over $8 million Phase 1 project was completed in collaboration through a regional partnership with Ducks Unlimited, Metroparks Toledo, the Ohio Division of Wildlife and Great Lakes Restoration Initiative (GLRI) funding from National Oceanic and Atmospheric Administration (NOAA). Phase 2 of restoration will restore and connect the remaining 255 acres of the property and is expected to be completed by Spring 2022. 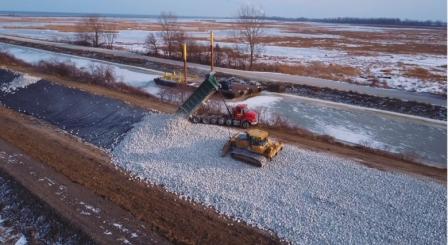 Otter Creek is a small creek that flows southwest to northeast through the cities of Toledo and Oregon, Ohio, before emptying into South Maumee Bay as part of the Maumee AOC. The lower 1.7 miles of the creek is a highly industrial area containing an active railroad yard, oil refineries, and closed landfills. Currently, municipal and industrial storm water outfalls continue to flow into the creek. Initial sediment testing determined that this area of the creek contained elevated levels of PAHs and Diesel Range Organics (DROs). With an anticipated start date in late 2020, an estimated 57,000 cubic yards of contaminated sediment will be removed from Otter Creek and be completed by the end of 2021. In July of 2020, a $10 million Great Lakes Legacy Act (GLLA) Project Agreement amendment for sediment remediation cost share in collaboration with the EPA and three industrial partners was signed. An estimated $4.7 million of the estimated $12 million project total will be contributed by the industrial partners.

The Ottawa River is located on the northwest side of Toledo, Ohio, and falls within the Maumee AOC. During the 1900s, the Ottawa River suffered from improper waste disposal practices resulting in hazardous substances entering the water. It was considered one of the most contaminated waterways draining into the Great Lakes. In collaboration with EPA, Ottawa River Group, seven industries and the city of Toledo, the Ottawa River project received funding from the GLLA to address 250,000 cubic yards of contaminated sediment. From August to December of 2009, 5.6 miles of the Ottawa River were dredged, removing significant amounts of pollution from the Ottawa River. When compared to tests from 2010, recent sampling has shown that the water quality has significantly improved and warning signs for people to avoid contact have been removed and fish advisories reduced. In 2018, a no-contact advisory for the lower Ottawa River was officially removed. This project was cost-shared, with nonfederal partners providing 50% of the total $47.2 million project cost. 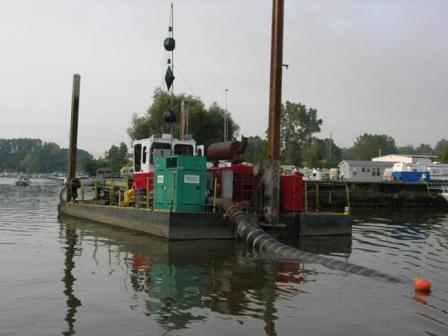 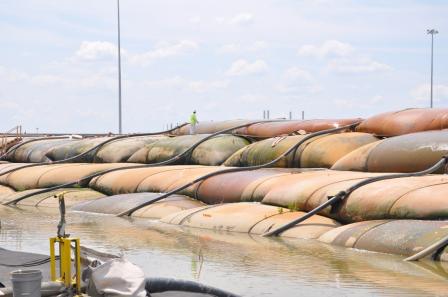 Swan Creek is a tributary to the Maumee River that is located on the southwest side of Toledo, Ohio, within the Maumee AOC. A GLLA Project Agreement to conduct a Focused Feasibility Study (FFS) was signed to evaluate data and determine remedy options for addressing contaminated sediments in the lower portion of this waterway. This project is cost-shared between Ohio EPA and the EPA. The FFS is expected to be completed by 2021. Additionally, the EPA is fully funding a sediment site characterization project to better define the nature and extent of sediment contamination in Swan Creek. This work is scheduled for later in 2020. 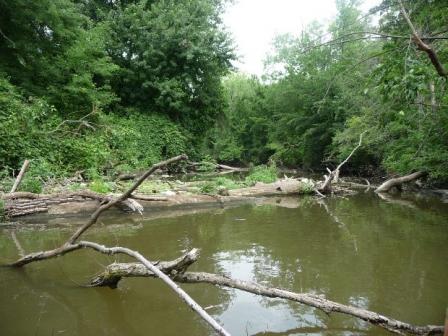 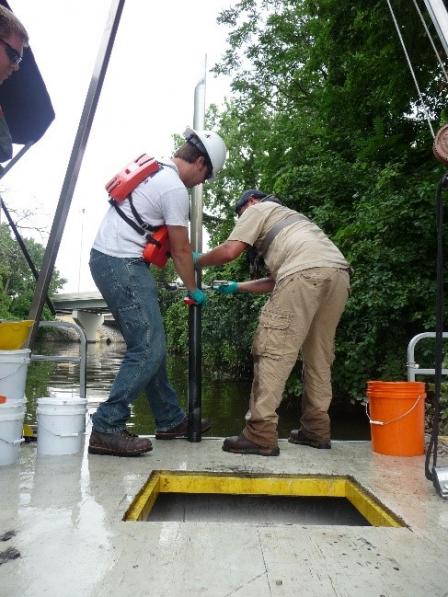 U.S. EPA and a contractor collecting a sediment core on Swan Creek to determine level of contamination within the creek. Photo credit: Ohio EPA

Toussaint Marsh is a 125-acre site located in northwestern Ohio about five miles from Lake Erie. The goal of this project was to restore the connection between the wetlands and the Toussaint River. This project addressed the Loss of Fish and Wildlife Habitat BUI, improved the connectivity of wetland habitat, and improved water management capability for the control of invasive species. Toussaint Marsh was completed in collaboration with Ohio Division of Wildlife, The Nature Conservancy and Ducks Unlimited, National Oceanic and Atmospheric Administration, and U.S. EPA.