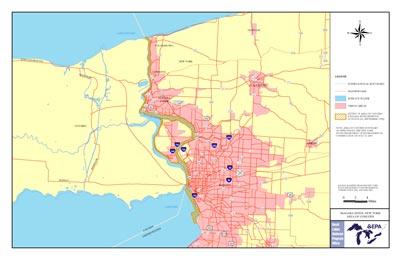 The Niagara River is located in both Erie and Niagara counties in western New York. In 1987 the Niagara River was designated an Area of Concern (AOC) as part of the Great Lakes Water Quality Agreement of 1987.

The Niagara River is a binational AOC that includes the entire Niagara River. The U.S. side of the AOC consists of an Impact AOC and a Source AOC. The Impact AOC extends from the mouth of Smoke Creek near the southern end of the Buffalo Outer Harbor (which is within Lake Erie) north to the mouth of the Niagara River at Lake Ontario. Within the river, the international border between Canada and the U.S. forms part of the Impact AOC boundary. On the landward side, the Impact AOC boundary follows the shoreline. In the Outer Harbor area, the in-water boundary generally follows the major breakwalls. In the southernmost section, where no breakwall is present, the AOC extends approximately one-half mile from shore.

The Source AOC consists of portions of five tributaries to the AOC, as described below. In each case, the Source AOC includes the full width of the stream channel, but no upland areas beyond the top of the shoreline embankment.

At the beginning of the 20th century, Niagara Falls and the surrounding area was home to major expansions in steel and chemical manufacturing, as well as grain milling due to the availability of electricity and  cooling water from the falls and open land. Much of this growth concentrated along the shoreline in Buffalo, Tonawanda, and Niagara Falls. Steel, petrochemical, and chemical manufacturing industries flourished along the Niagara River into the late 1970s, but subsequently declined leaving behind a legacy of contamination.

Post-industrial and municipal discharges degraded water quality and contaminated sediment. This left habitat degraded and the survival of aquatic life in the AOC has been impacted and impaired by toxic chemicals such as PCBs, dioxin, dibenzofuran, PAHs and pesticides.

Six federal National Priority List (NPL) sites, other hazardous waste sites, urban development, and contaminated discharges from Lake Erie’s watershed, have all been sources of pollution to the area and have led to its designation as an AOC. In addition to Great Lakes Restoration Initiative efforts, federal and state governments and responsible parties have collectively spent hundreds of millions to remediate hazardous waste sites.

An interim success of remediation and restoration work is removing Beneficial Use Impairments (BUIs). BUIs are designations given by the International Joint Commission  representing different types of significant environmental degradation. As cleanup work is completed, and monitoring demonstrates sufficient environmental health improvements, BUIs can gradually be removed. The list below shows which BUIs have been removed, and which remain. Once all BUIs are removed, the process of delisting the AOC can begin.
More information:

Through multiple partnerships, significant progress towards remediating and restoring the Niagara River AOC has been made. Many partners are working together to address the remaining BUIs.

After several years of coordination and development, the Niagara River AOC Habitat Restoration Plan was finalized in 2019. The Habitat Plan outlines the management actions necessary to remove the Loss of Fish and Wildlife Habitat BUI. Within this plan, 12 habitat restoration projects have been identified. Of those, six are either under way or completed. Together, the projects will restore approximately 100 acres of shallow water/coastal wetland habitat.

The Niagara River AOC partners are in the process of outlining necessary actions needed for contaminated sediment remediation work throughout the AOC. Sediment contamination is a large impediment for the Niagara River AOC, with several BUI designations linked to it as the cause of impairment. Over the next several years, federal and state agencies and partners will continue to work together to make progress that will eventually lead to BUI removals and the delisting of the Niagara River AOC.

The projects highlighted below represent both completed and existing projects within the AOC. These projects will advance progress and lead to BUI removals. 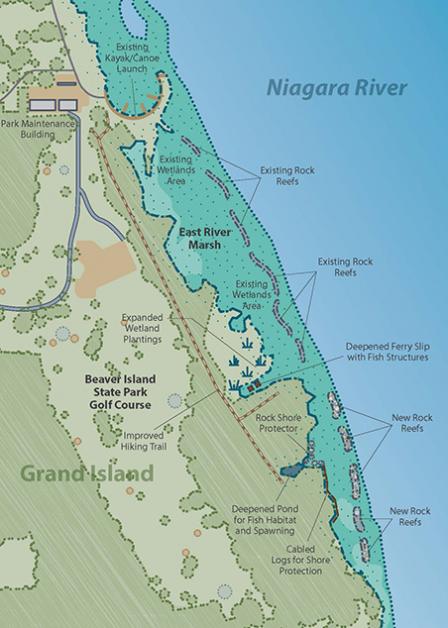 The New York State Parks, Recreation and Historic Preservation (NYSPRHP) received Great Lakes Restoration Initiative (GLRI) funding to expand on improvements to the East River Marsh completed in 2003. The East River Marsh Project area faced several challenges including shoreline erosion, loss of habitat, lack of wetlands along the river’s edge, and few places for fish and wildlife to breed. This project was completed in summer 2019 and included the installation of five rock reefs that will protect the shoreline, stabilize riverbanks and reduce erosion. This will encourage submerged and emergent vegetation growth and expand river wetland habitats. 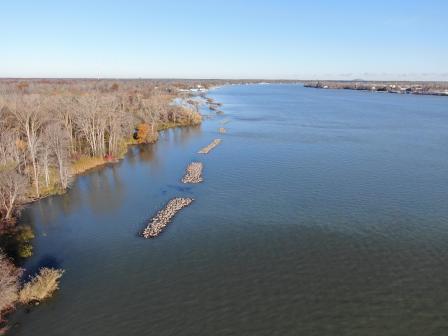 Protection and enhancement of shallow water coastal wetlands has been identified by the Remedial Advisory Committee for the Niagara River AOC as a priority action required for delisting of the Loss of Fish and Wildlife Habitat and Degradation of Fish and Wildlife Populations BUIs. An interagency subcommittee has prioritized this and five related projects along the Grand Island shoreline due to the perceived opportunities to restore this threatened and valued habitat type. The East River Marsh Extension Restoration Project enhanced over 9 acres of habitat along more than 1,000 feet of shoreline. 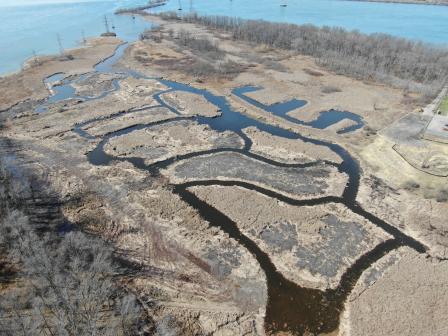 Channeling, potholing and past dredging work in the Burnt Ship Creek is shown from an aerial photo. Image courtesy of NYSPRHP.

The Burnt Ship Creek was a former stream channel that had been encroached by hybrid cattail. This encroachment restricted aquatic and wildlife passage and reduced biodiversity and productivity.

The restoration project will involve dredging out extensive cattail growth along Burnt Ship Creek and planting a variety of native submerged and emergent vegetation. This will restore the stream channel, increase open water and improve water movement through the marsh. These enhancements will provide access and use of the marsh by fish and wildlife, allowing fish passage into the wetland and habitat enhancement for fish, waterfowl and other wildlife, while increasing native plant diversity and resilience. 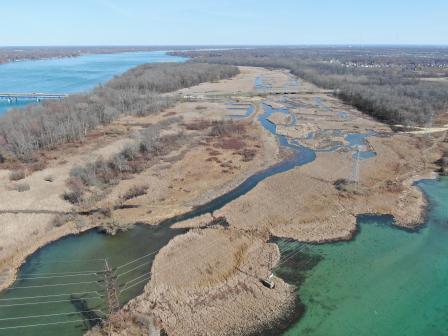 The photo shows the extensive wetland at Buckhorn Island State Park. Burnt Ship creek is the access into that wetland from the Niagara River. Image courtesy of NYSPRHP

Construction began in winter 2019/2020 and is anticipated to be finished in 2021. Once completed, the project will include about 900 feet of dredging for fish passage, cover habitat enhancements and open water habitat feature enhancements. The project will also reconnect the Niagara River to an extensive wetland at Buckhorn Island State Park, providing access for fish and wildlife again.

The Burnt Ship Creek Restoration project is considered to have a significant impact on the removal of the following BUIs: 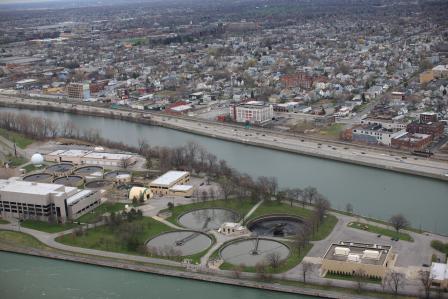 An aerial photo shows the Black Rock Canal between unity island and the sewage treatment plant in the foreground and the City of Buffalo in the background.

The Black Rock Canal is a Federal harbor in the Niagara River Watershed in Buffalo, NY and falls within the Niagara River AOC. This project involved the planning, design and removal of about 180,000 cubic yards of contaminated sediments from the navigation channel in order to support the removal of several BUIs. The dredging removed legacy sediment, material which contained industrial contaminants from years past. The sediment was dredged in 2014 and 2015.

This project was considered a strategic navigation dredging project under the Great Lakes Restoration Initiative, because the Canal was not planned to be dredged by the U.S. Army Corps of Engineers, and it was a necessary project for BUI removal.

Completion of the project advanced efforts towards the removal of the following BUIs:

The Black Rock Canal Cleanup Project was a collaborative effort among the following project partners: