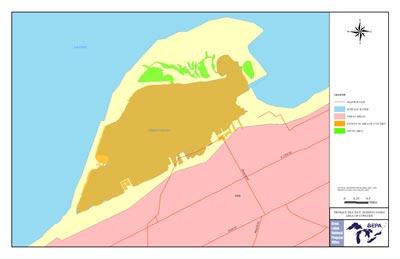 Presque Isle Bay in Lake Erie was designated as an Area of Concern in 1991 by the United States Department of State under the Great Lakes Water Quality Agreement after concerned citizens from Erie petitioned for its inclusion. In February 2013, Presque Isle Bay was removed from the binational list of AOCs, and is considered delisted. The bay continues to be monitored by the Pennsylvania Department of Environmental Protection with the EPA’s support.

Prior to delisting, waste disposal practices before state and federal regulatory programs were established resulted in the discharge of industrial and domestic wastewater into the bay or to its streams and tributaries. This contaminated the bay with pollutants such as excessive nutrients, organic compounds and heavy metals. Point sources of pollution included steel mills, a foundry, water treatment plants and other industrial facilities. Combined sewer overflows and urban runoff contributed to nonpoint pollution. The city of Erie has updated their wastewater collection, treatment, and conveyance system resulting in reduced combined sewer overflows and stormwater runoff into the bay.

A success following AOC assessment and work is removing Beneficial Use Impairments. Beneficial Use Impairments are designations given by the International Joint Commission representing different types of significant environmental degradation. As cleanup work is completed, and monitoring demonstrates sufficient environmental health improvements, BUIs can be removed. The list below shows the removed BUIs.

In the early 1990s, there was a high occurrence of fish liver and external tumors in the bay’s brown bullhead populations, but fish surveys conducted in the 2000s showed decreases in both liver and external tumors. Currently, the rates of fish liver tumors are similar to the least impacted reference site in Lake Erie. For this reason, the BUI Fish Tumors and Other Deformities was removed in 2012. 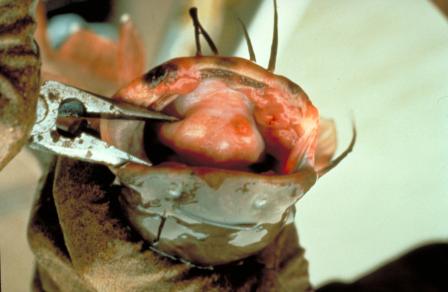 A scientist checks the mouth of a brown bullhead collected from Lake Erie for tumors.

General information about BUIs: Beneficial Use Impairments for the Great Lakes AOCs​

EPA, along with federal, state, and local partners, did extensive work to address the BUIs within the AOC. This included the city of Erie making changes to its wastewater treatment system, sediment evaluations to determine any threats to fish or benthic communities in the bay, fish surveys, monitoring water quality, and investigating other potential environmental impairments. After more than 20 years of a joint effort between the EPA and its partners, Presque Isle Bay AOC was formally delisted in 2013.