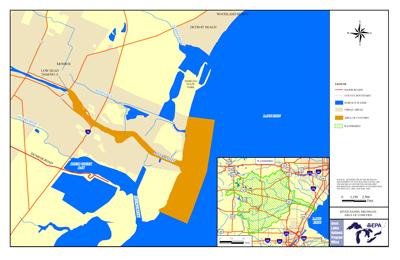 The River Raisin Area of Concern is located in the southeast portion of Michigan's lower peninsula in Monroe County. The boundaries of the River Raisin AOC are the lower (2.6 miles) portion of the River Raisin, downstream from Dam No. 6 at Winchester Bridge in the City of Monroe. It extends one-half mile into Lake Erie following the Federal Navigation Channel and along the nearshore zone of Lake Erie both north and south, for one mile.

An interim success of remediation and restoration work is removing Beneficial Use Impairments for the Great Lakes AOCs (BUIs).  BUIs are designations created by the International Joint Commission representing various types of environmental problems. As cleanup work is completed, and monitoring demonstrates sufficient environmental health improvements, BUIs can be removed. This AOC has removed five BUIs and has four more to remove. See below list. Once all BUIs are removed, the process of delisting the AOC can begin. 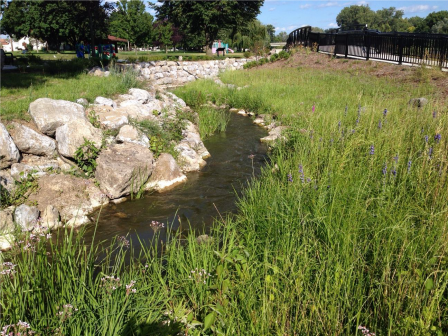 This channel bypasses a dam not removed from the river. Fish are now able to swim around the dam to spawn upstream. Photo Credit: City of Monroe, MIAll remediation and restoration projects or management actions are complete in the River Raisin AOC. Monitoring and maintenance work will continue in order to remove BUIs and delist the AOC. Projects to restore the AOC include work to reduce erosion to an in-river island, create and restore marsh and prairie habitat, remove invasive plant species, enhance fish passage to the river, and remove contamination from the food chain. These projects have provided habitat for fish, waterfowl, turtles and other wildlife. While not all BUIs have been removed, we are seeing results. Bird populations are starting to recover; bald eagle and osprey have been seen nesting in the area and migrating shorebirds use the restored coastal marsh in Sterling State Park.

Remediation and Restoration Projects for the River Raisin AOC

The River Raisin, known as “Nummasepee” or River of Sturgeon by Native Americans, was previously choked at the mouth by 8 different dams that prevented fish from migrating upstream from the Great Lakes. The River Raisin Fish Passage Project reconnected Lake Erie to the lower 23 miles of the river. This has allowed fish to travel up the river for spawning and expanded recreational access to the river. The project was conducted in two phases. Phase one removed two low head dams and installed rock arch ramps around two additional dams. Rock arch ramps help to emulate a natural river system by maintaining healthy depth and velocity conditions during low flow events and withstanding higher water levels without structural damage to the dams. Fish are easily able to pass these structures. Phase two installed two additional rock arch ramps; constructed a small channel for fish passage around another dam; and enhanced another fish passage channel. 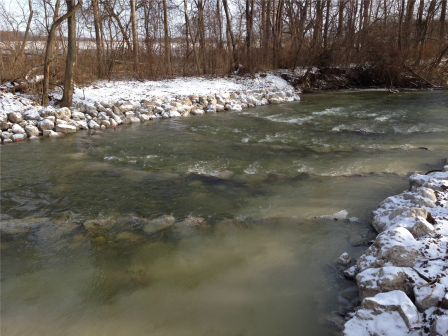 Rock Ramps were installed in portions of the river to reproduce the natural river flow while allowing for some dams to be left in place. Photo Credit: City of Monroe, MI

These projects were necessary to remove both the Loss of Fish and Wildlife Habitat and Degradation of Fish and Wildlife Populations BUIs. Fish are now using the new fish passage structures to access a longer stretch of the river. Scientists have also noted the presence of gizzard shad and blackside dace—migratory fish species never before encountered at this location. Without barriers along the river, residents are also taking advantage of kayaking, canoeing, and fishing opportunities.

Two large Great Lakes Legacy Act Projects removed 132,400 cubic yards of sediment contaminated with PCBs. The first project occurred in 2012-2013 and removed 106,000 CY. The second project took place in 2016 and addressed a 1.45-acre area where material affected by PCBs was dredged and capped. The projects were located northeast of the Port of Monroe turning basin. During the first project, the sediment was disposed of in the Sterling State Park Confined Disposal Facility (CDF). In order to use this facility, USEPA had to first remove an equal volume of sediment from the CDF to maintain its capacity for future navigation channel maintenance. For the second project in 2016, an off-site disposal facility was used, and material was disposed of at a separate disposal facility due to a high level of PCB contamination. The projects cost a total of $44.2 million and were cost shared between EPA, MDEQ, and Ford Motor Company. 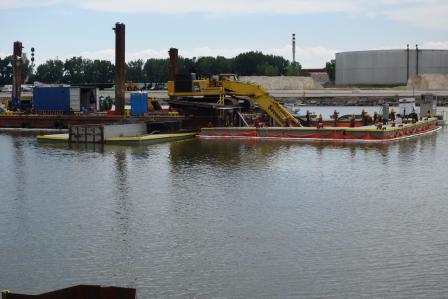 Dredging to remove contaminated sediment in the River Raisin.EPA worked closely with their project partners, the Ford Motor Company and Michigan Department of Environment, Great Lakes, and Energy (EGLE), to complete the sediment remediation projects. These projects are necessary to remove the following BUIs, which have not yet been removed.

Monitoring will determine when these BUIs can be removed and assure the sediment remediation is effective long-term.