View a boundary map of the St. Clair River AOC 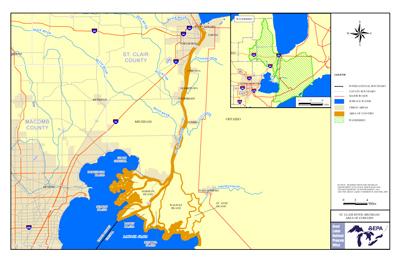 The St. Clair River AOC is a binational AOC, sharing a border with Canada. The boundary of the AOC includes the entire river from the Blue Water Bridge (connecting Sarnia, Ontario, and Port Huron, Mich.) to the southern tip of Seaway Island, Ontario, west to St. John’s Marsh in Michigan, and east to include the north shore of Mitchell’s Bay on Lake St. Clair.

The St. Clair River was identified as an AOC due to the following types of problems: conventional pollutants such as bacteria, heavy metals, toxic organics, contaminated sediment, fish consumption advisories, impacted animal and plant life, and beach closings. According to the Stage 1 Remedial Action Plan (RAP), the reasons for the Loss of Fish and Wildlife Habitat beneficial use impairment (BUI) in the St. Clair River were general loss of the aquatic plant community due to industrial, agricultural, recreational, and urban developments. There was also significant impact to natural resources including shoreline, tributary, nearshore, wetland, and river habitat due to filling, draining, dredging, and bulkheading for industrial, urban, agricultural, and navigational uses.

On the United States side of the St. Clair River AOC, 10 of the possible 14 BUIs were found to be impaired. The completion of 10 habitat projects was made possible through a $21 million investment from the Great Lakes Restoration Initiative, that led to the removal of the Loss of Fish and Wildlife BUI on the U.S. side of the AOC. Thanks to long-running efforts through the St. Clair River Binational Public Advisory Committee and other stakeholders, only two BUIs remain impaired: Restrictions on Fish and Wildlife Consumption and Restrictions on Drinking Water Consumption or Taste and Odor Problems.

An interim success of remediation and restoration work is removing Beneficial Use impairments (BUIs). BUIs are designations given by the International Joint Commission representing different types of significant environmental degradation. As cleanup work is completed, and monitoring demonstrates sufficient environmental health improvements, BUIs can be removed. The list below shows which BUIs have been removed, and which remain. Once all BUIs are removed, the process of delisting the AOC can begin.

To remove the Loss of Fish and Wildlife Habitat BUI, 10 projects in 13 locations were completed and will eventually lead to the delisting of the St. Clair River AOC.

In 2015 a habitat restoration project in the St. Clair River AOC was completed within the riverbank or riparian areas and along 500 linear feet of river shoreline.

Before restoration, the Marine Harbor hardened shoreline had an extensive near-shore shelf with little habitat.

The project objectives of this restoration achieved:

This shoreline project removed and replaced a total of 1,885 feet of vertical steel seawall, creating a more resilient and natural shoreline. It helped advance the removal of the Loss of Fish and Wildlife Habitat BUI in the St. Clair River Area of Concern.

The purpose of this St. Clair River shoreline restoration project was to repair the seawall while also providing fish and wildlife habitat restoration.

This project reestablished vital fish and wildlife habitat along the St. Clair River. Newly planted wetland vegetation established a “living shoreline” that provides spawning and nursery habitat for Great Lakes fish. Emergent wetland and upland prairie vegetation will benefit birds and other wildlife. In addition, the upgrades made to the adjacent public walkway and boardwalk improved fishing and recreational access for the community and visitors.

Restoration after the removal of failing steel seawall (left). Habitat established with rock, native trees and flowers for fish and wildlife (right).

Growing to lengths of 7 feet and weighing up to 300 pounds, the Lake Sturgeon is the largest fish in the Great Lakes. They are classified as threatened or endangered in seven of the eight Great Lakes states.

Helping to determine current Sturgeon populations, capture-release tagging studies are performed. During a tagging study, scientists record the sex, length, and weight of each fish caught. In addition to a fin tag, an electronic tag implant is attached. The scientists also harvest a section of the fin ray to determine aging and genetics. Before releasing back into the wild, blood is occasionally taken for contaminants research. 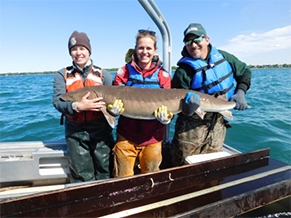