The Canadian St. Lawrence River at Cornwall AOC extends from the Moses-Saunders Power Dam to the eastern outlet of Lake St. Francis and spans across the provinces of Ontario, Quebec in Canada, and Mohawk Council of Akwesasne Mohawk Territory.

There have been many activities leading to improvements in water quality in the AOC since 1987, including remediation of hazardous waste sites and contaminated sediments, and source control activities. Hazardous wastes have contaminated soils, river sediments, groundwater, and plant and animal life with toxic chemicals, including polychlorinated biphenyls (PCBs) and metals.

Sources of pollution in this AOC include historical industrial discharges, municipal treatment facilities, atmospheric deposition, non-point source discharges, and power dam and seaway construction. The efforts to clean and restore the AOC are ongoing and will improve the overall environment and positively impact the native fish and wildlife communities.

BUIs are designations created by the International Joint Commission (IJC), representing different types of significant environmental degradation. . Of 14 possible BUIs identified by the IJC, seven BUIs were identified for the St. Lawrence AOC. As cleanup work is completed, and monitoring demonstrates BUI removal criteria have been met, BUIs can be removed. The removal of BUIs is a good indication the environment is positively responding to the remediation and restoration work. One of the seven BUIs have been removed from this AOC. The SRMT is working on integrating traditional ecological knowledge (TEK) into BUI removal criteria in this AOC.  Once all BUIs are removed, the process of delisting the AOC can begin.
More information:

There have been several remediation projects in the AOC as part of EPA’s Superfund program. Examples of the work in these Superfund projects include removing and/or capping contaminated sediment, dredging, landfill capping, and habitat reconstruction.

The following Superfund sites are located in the AOC: 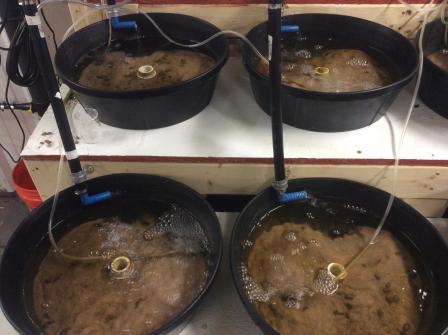 Freshwater mussels growing in their substrate pans. Credit: Saint Regis Mohawk TribeWhile remediation in the AOC is ongoing, SRMT has received GLRI funding to propagate three species of freshwater mussels that have been affected by remediation dredging and capping activities in the Lower Grasse River. The Pink Heelsplitter (Potamilus alatus) is listed as New York’s "species of greatest conservation need". This project will help with the removal of BUI Degradation of Benthos and aims to propagate 30,000 mussels by 2025.

To propagate mussels, trained scuba divers collect female mussels that are carrying larvae and take them to an aquaculture facility. There, the larvae are collected, counted, and tested before being released into a tank with host fish. In the tank, the larvae attach to the gills of the host fish, Freshwater Drum or Largemouth Bass, for about two weeks. They then drop off and are placed in a substrate pan to grow for four weeks to six months. The juvenile mussels are then placed in a cage in the river until they reach the right size for tagging, approximately six months to two years of age. The rehomed mussels will then repopulate the safer, cleaner habitats that were dredged and capped. 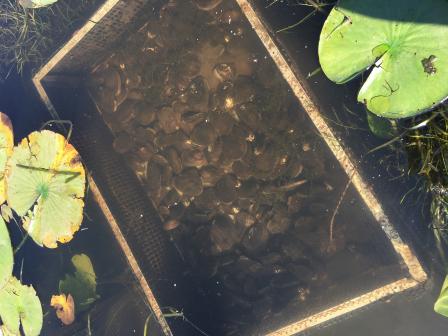 With this project, the SRMT is the first tribe to propagate freshwater mussels and the first in New York to successfully raise juvenile mussels. Other partners include USFWS Genoa National Fish Hatchery, New York State Department of Environmental Conservation, and New York State Museum. This project, along with NYSDEC's salvage and relocation project, will helpfreshwater mussel populations meet the 2025 goal for this AOC.