View a boundary map of the St. Louis River AOC 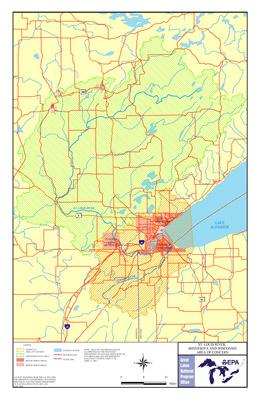 The St. Louis River AOC is one of the 31 U.S.-based Areas of Concern (AOC) across the Great Lakes created under the 1987 Great Lakes Water Quality Agreement. Draining 3,634 square miles of watershed and encompassing a 1,020 square-mile area, the St. Louis River is the second largest U.S.-based AOC. It crosses state boundaries, including both the states of Minnesota and Wisconsin. The AOC boundary includes the lower 39 miles of the St. Louis River, from upstream of Cloquet, Minnesota to its mouth at the Duluth/Superior Harbor, and that portion of the watershed; the Nemadji River watershed; and the western portion of Lake Superior defined on its eastern edge by a line drawn from the eastern HUC 12 Dutchman Creek watershed boundary in Wisconsin where it intersects the Lake Superior shoreline north to where the eastern HUC 12 Talmadge Creek watershed boundary in Minnesota intersects with the Lake Superior shoreline north to the intersection of the Cloquet River HUC 8. As the largest tributary to Lake Superior, the St. Louis River is vital to the regional economy and encompasses the Port of Duluth-Superior, an essential port for Great Lakes shipping. The AOC also includes:

However, historical industrial use of the river, before the onset of modern pollution laws, has resulted in sediments contaminated with:
Pollutants in the AOC are also due to:

An interim success of remediation and restoration work is removing Beneficial Use Impairments (BUIs).  BUIs are designations created by the International Joint Commission, representing different types of significant environmental degradation.  As cleanup work is completed, and monitoring demonstrates sufficient environmental health improvements, BUIs can gradually be removed. The list below shows which BUIs have been removed, and which remain.  Once all BUIs are removed, the process of delisting the AOC can begin.

BenthosPlants and animals that live in or on the bottom of an aquatic environment, including worms, shellfish and bottom-feeding finfish.

EPA has continually worked with federal, state and local partners to execute remediation and restoration work in the area with the ultimate goal of removing the AOC designation and revitalizing the surrounding communities.

To delist the St. Louis River AOC, 75 sediment remediation and habitat restoration management actions have been identified and 25 have already been completed. Sediment remediation projects will remove contaminants such as polycyclic aromatic hydrocarbons (PAHs) and heavy metals from the environment. Habitat restoration is beneficial for improving plant and animal populations. Actions for completing restoration invasive species control, fish passage projects, wetland restoration, and increasing habitat connectivity. To delist this AOC, a goal of restoring 50 percent of lost habitat (17,000 acres) has been set. Not only will these projects enhance environmental productivity, but they will also add significant socioeconomic value to the surrounding communities. 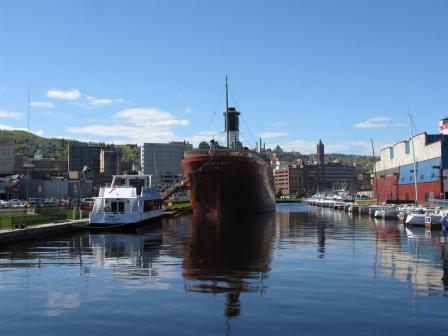 The SS William A. Irvin serves as a museum in the Minnesota Slip is now relocated for sediment remediation.

Three slip sediment remediation projects (Minnesota Slip, Slip 3, and Slip C) are now complete in the Port of Duluth-Superior within the St. Louis River AOC. Through the Great Lakes Restoration Initiative (GLRI) and the EPA’s partnership with the Minnesota Pollution Control Agency, the projects remediated a total of 154,000 cubic yards of contaminated sediment by placing a two-foot protective cap on top of sediment left in place. The projects, totaling $10 million, removed heavy metals, dioxins, PCBs, and PAHs from the environment and are a necessary step for the removal of two BUIs:

Although these projects are vital to the health of the AOC, their location and process has also garnered unique attention. To complete the Minnesota Slip project, the SS William A. Irvin, a retired lake freighter now serving as a museum, has been temporarily relocated outside of the slip. Construction took place September through November 2018 and the freighter will return to Minnesota Slip in Spring 2019.  Eighteen acres have been restored, and the waterfront is now cleaner for both fish and humans alike.

Habitat restoration projects target areas that will be most beneficial for improving the local habitat, plant and animal populations and include actions such as invasive species control, fish passage projects, wetland restoration and increasing habitat connectivity. In order to delist this AOC, a goal of restoring 50% of lost habitat (17,000 acres) has been set. Not only will these projects enhance environmental productivity, but they will also add significant socioeconomic value to the surrounding communities. 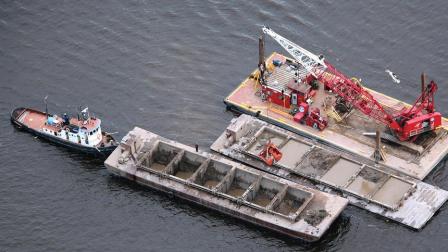 Dredge material sourced from the East Gate Basin being placed at the 40th Ave. Site. (Photo Credit: Nelson French, previous AOC coordinator)Through a creative partnership among EPA, the Army Corps of Engineers, Minnesota Pollution Control Agency, Minnesota Department of Natural Resources and other local agencies, annual harbor maintenance dredge material was beneficially used to restore critical aquatic habitat in the St. Louis River Area of Concern. Following an innovative three-year pilot program to determine that navigational material from the Duluth-Superior harbor was clean and safe enough to recycle back into the water, dredged material was placed over a total of 680 acres between 21st Avenue West and 40th Avenue West.  Approximately one million cubic yards of dredge material has contributed to habitat enhancement through the creation of gradually sloped shorelines, the addition of shoals or islands, and the reduction of acreage exposed to excessive wave energy. Through this partnership and investment in historic industrial sites, both navigation and ecological function will be improved in the largest freshwater port of the Great Lakes. This project works to remove two BUIs: