Brachionus Leydigii in the Great Lakes 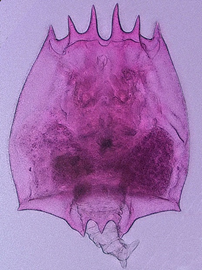 Brachionus leydigii recently discovered in Lake Erie(August 14, 2017) U.S. Environmental Protection Agency’s Great Lakes National Program Office has confirmed the presence of a new non-native species in the western basin of Lake Erie. The tiny organism is a non-native invertebrate rotifer, a type of zooplankton. This finding is the result of a cooperative agreement between EPA and Cornell University researchers as part of EPA’s long-term biology monitoring program in the open waters of the Great Lakes. Cornell researchers detected the rotifer species, Brachionus leydigii, in samples collected in spring 2016. Only one specimen (a female) was found.

According to the U.S. Fish and Wildlife Service’s rapid risk screening process, the ecosystem risk from Brachionus leydigii is uncertain due to lack of documented introductions of this species. The climate-matching analysis results indicate a high climate match, as the Great Lakes climate is very similar to the climate in native ranges of B. leydigii.

B. leydigii is able to tolerate a wide range of temperature and salinity conditions, appearing in both marine and freshwater environments. The natural distribution of B. leydigii is not well known.  It has been most often reported in parts of the eastern hemisphere, including Europe, Asia and Australia. The species can handle cold temperatures and overwinter (diapause in sediments).

There is little or no evidence to support B. leydigii having the potential for significant environmental or socio-economic impacts if introduced to the Great Lakes. There is also little to no evidence to support that B. leydigii has the potential for significant beneficial effects if introduced to the Great Lakes. In a study of transoceanic ships entering the Great Lakes in 2001 through 2002 -- before the current standards on flushing ballast water went into effect, this species was found hatched from diapausing eggs in residual ballast sediment in four of the 35 ships surveyed. The species’ detection in Lake Erie was not part of that study.