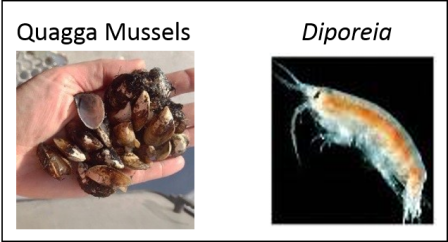 Benthic macroinvertebrates, or benthos, are small aquatic animals (including worms, crustaceans, bivalves, and aquatic larval stages of insects) that live on the bottom of the lake.

Types of benthos collected in the Great Lakees include:

Why does GLNPO monitor benthos?

Benthos are an important part of the lower food web, serving as a food source for prey fish. Many benthic species are sensitive to the effects of chemical pollution and can serve as indicators of aquatic environmental health, too.

How does GLNPO sample and analyze benthos?

PONAR hitting the lake bottom to collect a sediment sample

A PONAR grab sampler consists of two opposing semi-circular jaws held open by a trigger mechanism. The PONAR is lowered through the water column to the lake bottom, when contact with the bottom releases the trigger and snaps the jaws shut. Sediment and any resident benthic organisms from the lake bottom get trapped in the PONAR and are brought back to the ship. 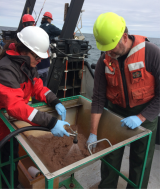 After washing the finer sediment out of the samples, scientists pick the organisms out of the mud.  In the laboratory, the benthic organisms are identified and counted using a microscope and then weighed. The resulting estimates of density

densityThe amount of mass per unit volume. and biomass

biomassThe amount of living matter in a given area or volume. are used to track changes in benthic populations from year to year. 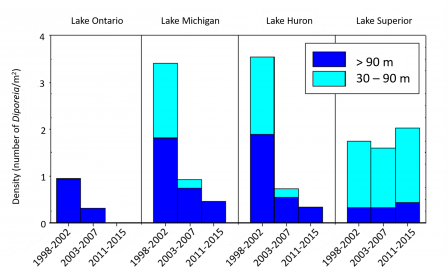 Invasive zebra and quagga mussels populations are increasing in the Great Lakes, having an extreme effect on both the water quality and lake bottom composition.