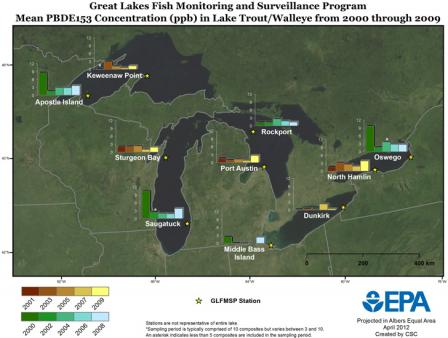 Mean PBDE153 concentration (ppb) in Lake Trout/Walleye from 2000 through 2009. Click to open larger map.The production and use of three popular commercial formulations of Polybrominated Diphenyl Ethers (PBDEs) have been voluntarily phased out by industry in North America. Routine monitoring of PBDEs in whole top predator fish from the Great Lakes combined with retrospective analyses of archived samples by the U.S. EPA (SOLEC 2012) and Environment Canada have provided a complete picture of PBDE contamination in Great Lakes fish from 1977 to the present day. Concentrations of PBDEs in Lake Trout and Walleye rose continuously through to the early 2000s then began to decline.

Log-linear regression of PBDE concentrations in Lake Trout and Walleye (U.S. EPA; Lake Erie), show significant declining trends of 5.8%/year for tetra-BDEs, 6.4% for penta-BDEs, and 3.4% for hexa-BDEs in Lake Ontario and annual declines of 19% for tetra-BDEs and 17% for penta-BDEs from Lake Michigan. PBDE concentrations in Lakes Superior, Huron, and Erie also appear to be declining as the slopes of the regressions are all negative; however, the slopes are not significantly different from zero 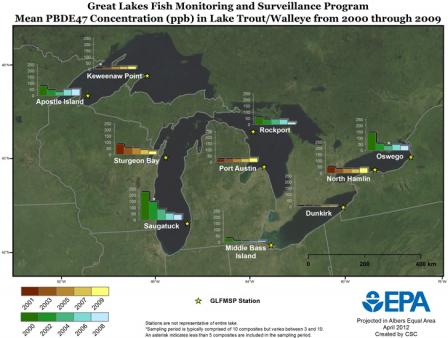 Mean PBDE47 concentration (ppb) in Lake Trout/Walleye from 2000 through 2009. Click to open larger map.at a = 0.05 with a power of 80%. The majority of tetra-BDE and all hexa-BDE concentrations reported for Lake Trout and Walleye in 2009 from all the Great Lakes are below Environment Canada's Federal Environmental Quality Guidelines; however, all measured penta-BDE concentrations are well above the FEQG of 1.0 ng/g ww.