Types of zooplankton found in the Great Lakes:

Why does GLNPO monitor zooplankton?

Invasive zooplankton have altered the Great Lakes ecosystem. Monitoring zooplankton is therefore another way to track the introduction of new species, as well as the abundance and distribution of existing species, in the lakes.

How does GLNPO sample and analyze zooplankton? 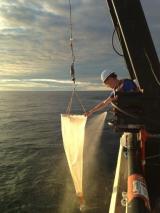 biomassThe amount of a living species, expressed as a concentration or weight per unit area. and species diversity and density

densityThe quantity of mass contained in a specific volume. across each Great Lake.

A downloadable file is now available at EPA's Central Data Exchange, which contains EPA GLNPO’s abundance and biomass data for the Great Lakes crustacean zooplankton community. The data are organized by major taxonomic group, for all five lakes from 1997, the first year in which deep (100 m) zooplankton tows were analyzed by GLNPO’s program, through 2016.