Q:  What is Thermocyclops crassus? 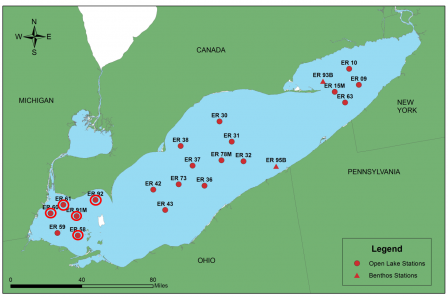 Q: Where was it found?

A: EPA’s Great Lakes National Program Office and Cornell University recently confirmed the presence of this non-native species during routine zooplankton monitoring in the open waters of Lake Erie as part of the GLNPO Long-term Biology Monitoring Program. On August 22, 2016, Cornell University researchers identified Thermocyclops crassus among other zooplankton in a sample collected in 2014 from the western basin of Lake Erie, near the mouth of the Detroit River. The collected specimens were confirmed by a recognized expert on Thermocyclops crassustaxonomy (Dr. Janet Reid, Smithsonian Institution, retired) in late September. One of the five individuals collected in 2014 was a female that exhibited evidence that the population was reproducing. Ongoing analyses have also identified Thermocyclops crassus individuals in samples collected from 2015 and 2016 in small populations.

Q: Is this species invasive?

A: An invasive species is a non-native species that introduces harms, or is likely to harm, the environment, associated economies, or human health of an ecosystem. Thermocyclops crassus is not native to the Great Lakes. The species has not been documented to cause harm, and has not been projected to cause harm in the Great Lakes.  However, there is little information about this species, so additional scientific studies may be needed. Therefore, there isn’t enough information available yet to tell if Thermocyclops crassus is invasive.  This exotic species had previously been discovered in North America in Lake Champlain in 1991, but it remains rare in that system. A study of transoceanic ships entering the Great Lakes from 2001 through 2002 -- before the current standards on flushing ballast water went into effect -- found one Thermocyclops crassus in the sediment of a ballast water tank of one ship. The species’ detection in Lake Erie was not part of that study. Its native ecosystem conditions are similar to those of western Lake Erie due to the warm mesotrophic and eutrophic water.

Q: What is significant about this detection?

A. The U.S. Geologic Survey Non-indigenous Aquatic Species (NAS) database has location information for aquatic invasive species. The National Oceanic and Atmospheric Administration database links to the USGS database and provides other details.

Q: What does this mean for the Great Lakes

A. There is not enough information yet to know how this non-native species entered the Great Lakes or how it will affect the Great Lakes ecosystem. It remains rare in Lake Champlain and has shown no signs of ecosystem impact.

Q: What is EPA doing about this species?

A. EPA will continue to research this non-native species, monitor its abundance and distribution and assess any risk the species may pose to the ecosystem.