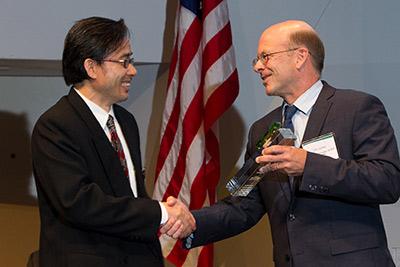 Jim Jones, Former Assistant Administrator of EPA's Office of Chemical Safety and Pollution Prevention, with Professor Eugene ChenInnovation and Benefits: Professor Eugene Chen of Colorado State University is being recognized for developing a process that uses plant-based materials in the production of renewable chemicals and liquid fuels.  This new technology is waste-free and metal-free. It offers significant potential for the production of renewable chemicals, fuels, and bioplastics that can be used in a wide range of safer industrial and consumer products.

Summary of Technology: In condensation reactions, as two molecules combine to form a larger molecule, small molecules split off. Because of the loss of this small molecule, such as water, hydrogen chloride, ethylene, methanol, or acetic acid, these reactions are intrinsically waste-generating. Additionally, condensation reactions are often mediated by metals. For the production of jet or other transportation fuels, fine chemicals, and bioplastics, biomass platform chemicals, such as 5-hydroxymethylfurfural (HMF), need to be upgraded  through the C‒C bond forming, condensation reaction into chain-extended, higher energy-density substances, such as 5,5'-dihydroxymethylfuroin (DHMF). The 12-carbon DHMF is a new bio-derived building block that can be catalytically transformed into renewable fine chemicals, polymeric materials, and oxygenated biodiesel or premium alkane jet fuels.

Direct HMF coupling is not possible through aldol self-condensation of HMF because it lacks a necessary hydrogen atom in the α-position to the carbonyl group. Existing alternative methods, such as metal-mediated cross-aldol condensation, have to use other enolizable petrochemicals. These methods also suffer from the unavoidable waste inherent in conventional condensation reactions. Professor Chen and his graduate student Dajiang (DJ) Liu developed a new condensation technology that uses an organic catalyst, such as an N-heterocyclic carbene (NHC), to reverse the polarity of the HMF carbonyl (umpolung), to enabling a solvent-free direct condensation coupling of HMF into DHMF with quantitative yield and 100% atom-economy.

The new condensation technology not only offers two novel condensation synthetic pathways towards the HMF upgrading and polyester production from acrylic monomers, both processes of which are not possible by any existing technologies, it also exhibits important hallmarks of a green technology by being catalytic, metal-free and 100% atom-economical as well as solvent-free (for the HMF upgrading) or biodegradable (for the polyester production).

Return to the list of all winners including the 2015 Award Winners.