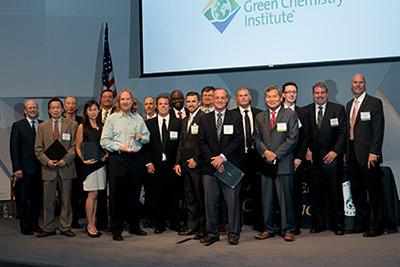 Jim Jones, Former Assistant Administrator of EPA’s Office of Chemical Safety and Pollution Prevention, with awardees from AlgenolInnovation and Benefits: Algenol in Fort Myers, Florida, is being recognized for developing a blue-green algae to produce ethanol and other fuels. The algae uses CO2 from air or industrial emitters with sunlight and saltwater to create fuel while dramatically reducing the carbon footprint, costs and water usage, with no reliance on food crops as feedstocks. This is a win-win for the company, the public, and the environment. It has the potential to revolutionize this industry and reduce the carbon footprint of fuel production.

Summary of Technology: Ethanol can be used as a transportation fuel directly or blended with gasoline. Algenol has developed technologies for the recombinant and classical genetic improvement of cyanobacteria (blue-green algae), leading to strains that divert more than 80% of the photosynthetically fixed carbon into ethanol without a decrease in overall photosynthetic yield. This has led to improved biofuel productivity, higher economic returns, minimal waste production, and a lower carbon footprint.

Algenol’s hybrid algae are grown in saltwater in proprietary photobioreactors (PBRs) which minimize heterotrophic contamination and reduce water use. Photosaturation is a common limiting feature in aquatic photosynthesis and occurs when the rate of photon absorption exceeds the rate that the algae can use the energy for product formation (i.e., carbon fixation), such that the energy of the excess photons is wasted through non-photosynthetic processes. Algenol’s vertical PBR system offers a productivity advantage over horizontal systems by delivering a more dilute irradiance over a greater surface area of the PBR, thereby limiting photosaturation.

Algenol has demonstrated about 15–20 times the productivity of corn-based ethanol on a per acre basis. In the past five years, Algenol moved this technology from laboratory scale to pilot scale and is currently completing the construction and commissioning of a 2-acre facility as part of the IBR Project ($52 million project with a $25 million grant from the U.S. Department of Energy). The overall process reduces the carbon footprint relative to gasoline by 60–80% according to peer-reviewed published work from Georgia Tech. A single 2,000 acre commercial Algenol module is the equivalent of planting 40 million trees or removing 36,000 cars from the road. Broad deployment of this technology, with its low-carbon footprint, can contribute to CO2 emission reduction targets and lower dependence on fossil fuel resources.

Return to the list of all winners including the 2015 Award Winners.