Most of the 35,000+ supermarkets in the United States use centralized direct expansion (DX) systems to chill their products. Typically, these refrigeration systems are charged with 3000 – 4000 pounds of refrigerant and can leak in excess of twenty percent of their charge each year. Commonly used refrigerants include ozone-depleting hydrochlorofluorocarbon (HCFC) refrigerants, often HCFC-22, and blends consisting entirely or primarily of hydrofluorocarbons (HFCs), both of which are potent greenhouse gases. Fortunately, in recent years there have been several advancements in refrigeration technology that can help food retailers reduce both refrigerant charges and refrigerant emissions.

Below is a general description of a centralized DX system as well as an overview of the different advanced refrigeration options.

At least 70 percent of stores in the United States use centralized DX systems to cool their display cases and walk-ins. In a DX system, the compressors are mounted together and share suction and discharge refrigeration lines that run throughout the store, feeding refrigerant to the cases and coolers. The compressors are located in a separate machine room, either in the back of the store or on its roof, to reduce noise and prevent customer access, while the condensers are usually air-cooled and hence are placed outside to reject heat.

The multiple compressor racks operate at various suction pressures to support display cases operating at different temperatures. The hot gas from the compressors is piped to the condenser and converted to liquid. The liquid refrigerant is then piped to the receiver and distributed to the cases and coolers by the liquid manifold. After cycling through the cases, the refrigerant returns to the suction manifold and the compressors.

Schematic of a Centralized DX System 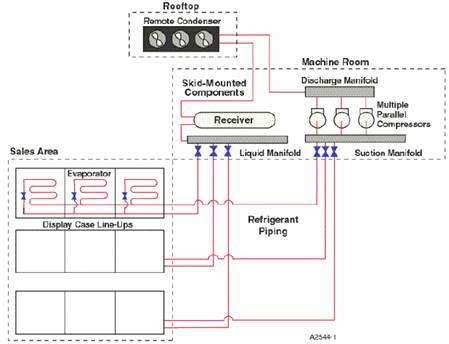 Unlike centralized direct expansion refrigeration systems, distributed systems use multiple smaller units that are located close to the display cases that they serve. For instance, compressors in a distributed system may be located on the roof above the cases, behind a nearby wall, or even on top of or next to the case in the sales area. The close proximity of the compressors to the cases and coolers allows the system to use considerably less piping and additionally use a smaller refrigerant charge than traditional DX systems. This reduction in charge often results in a decrease in total refrigerant emissions.

Schematic of a Distributed System 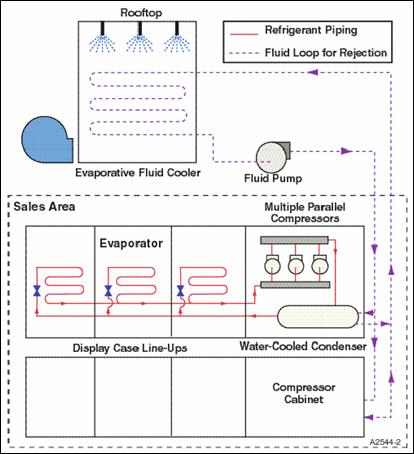 Schematic of a Secondary Loop System 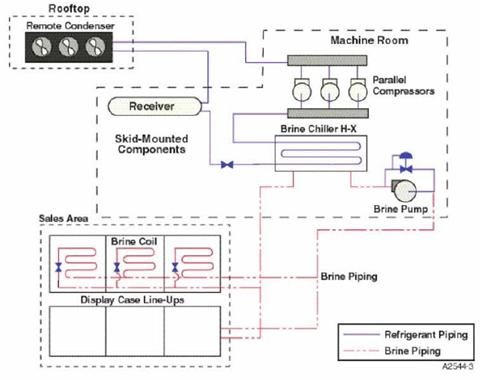