On social media? If you choose, you can tweet this fact: The 109 schools in @EPA's #EPAGreenPower 2018-19 College & University Challenge used nearly 3.6 billion kWh green power this year, which is equivalent to more than 333,000 homes' electricity use for one year! bit.ly/2UDf2fw

On April 22, GPP released updates to its Top Partner Rankings, which feature Partner organizations leading the way with their use of green power.

With this update, Google has taken the number one spot on the National Top 100 for the first time with its green power use of more than 5.9 billion kilowatt-hours (kWh). Two other Partners in the top five—Microsoft and Equinix—also increased their overall green power use. New to the Top 100 list this quarter are General Motors, LLC and WaferTech, LLC. In total, the Partners featured on the Top 100 list use more than 53 billion kWh of green power. To produce an equivalent amount of power would require nearly 47,000 football fields of solar panels for one year.

See what else changed on the Top Partner Rankings this quarter.

The Green Power Partnership had another year of growth in 2018. Overall, Partners' annual green power use increased to nearly 55 billion kilowatt-hours (kWh), which is a 20 percent increase from 2017. Reported Partner use of green power through financial contracts (i.e., virtual power purchase agreements) increased by 126 percent (more than 4.7 billion incremental kWh), while physical power purchase agreements (PPAs) saw 45 percent growth (more than 1.4 billion incremental kWh) from 2017. Additional updated metrics for the Green Power Partnership are located on our Program Metrics page. 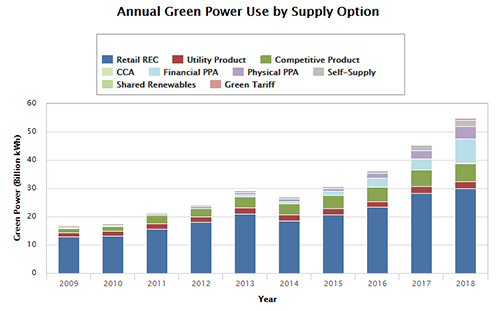 The pie chart below breaks out total green power use in kilowatt-hours (kWh) by primary industry sector. Technology and Telecom is the largest user of green power by industry sector in the Green Power Partnership, followed by the Banking & Financial Services, Local Government, and Higher Education sectors. 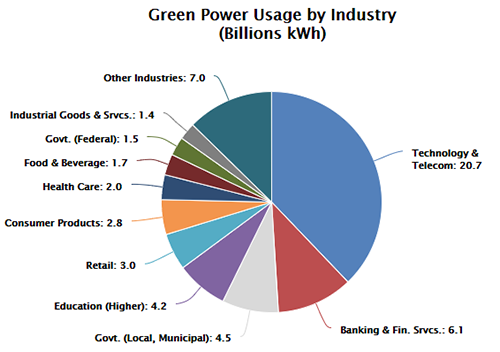 This past fall, a major revision to the Guide to Purchasing Green Power was released. The Guide was authored through the contributions of multiple organizations including EPA's Green Power Partnership, World Resources Institute (WRI), Center for Resource Solutions (CRS), and the U.S. Department of Energy, as well as selected content from the National Renewable Energy Laboratory (NREL).

GPP and CRS held a webinar on April 24th providing an overview of the Guide and the most recent updates, which include new market information and terminology, updated market statistics, new content on direct project engagement procurement options, and new examples of strategies for capturing and communicating benefits.

Learn more and review the presentations.

Green Power in the News