What is a Power Purchase Agreement?

How do Physical PPAs work?

In a Physical PPA, an organization signs a long-term contract with a third-party seller who agrees to build, maintain, and operate a renewable energy system either on the customer's property (on-site) or off-site. Regardless of whether the system is on-site or not, the Physical PPA customer receives the physical delivery of (or title to the) electricity through the grid. The customer agrees to purchase the power at a set price over an agreed upon term, and the seller assumes the risks associated with owning and operating the system. Many Physical PPA contracts include an escalator on the price, but these escalation rates are generally below historic price increases associated with the default supplier electricity price. At the end of the contract term, many Physical PPAs with on-site systems offer the customer the opportunity to either sign a new agreement or to purchase the system at fair market value. In this way, some customers can combine immediate savings (through the Physical PPA) with the eventual benefits of system ownership.

Since RECs are treated differently in each Physical PPA, it is important that the customer understand REC ownership in their particular contract. Oftentimes, the RECs are not conveyed to the customer and are instead sold by the project owner into the compliance market. To make claims about using green power from the Physical PPA, the customer must own the associated project RECs. Alternatively, the seller may use REC arbitrage to provide the customer with replacement RECs from another renewable energy project, but the customer's green power use claims need to align with the attributes of the replacement RECs. Learn more about the process of REC Arbitrage. In some Physical PPA structures, the seller retains the RECs for the first few years of the contract (while the sale of RECs may garner higher prices), and then conveys the RECs to the customer for the remainder of the contract term. 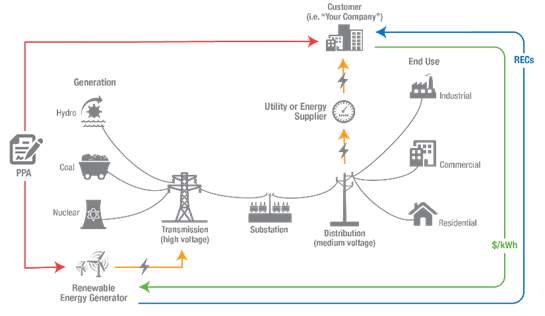 What is the difference between a Physical PPA and a Financial PPA?

With a Physical PPA, the customer receives the physical delivery of electricity from the seller through the grid, whereas with a financial power purchase agreement (Financial PPA), they do not. This is the key difference between a Physical PPA and an Financial PPA.

Advantages and Challenges of Physical PPAs

What are some organizations that are using Physical PPAs?

Many prominent organizations have chosen to use Physical PPAs since the procurement option began to take off in 2013, including Google, Walmart, Stanford University, and the District of Columbia government.

In 2014, Green Power Partners American University and George Washington University jointly signed a 20-year Physical PPA with the Capital Partners Solar Project, supplied by Duke Energy Renewables.1 This agreement enabled the creation of a 52-megawatt solar array in North Carolina, which was the largest photovoltaic project east of the Mississippi River at the time. The project is expected to supply both universities with approximately half of their respective power needs. Learn more about the Capital Partners Solar Project (PDF) (6 pp, 349K) Exit.