Cars, SUVs, and light duty trucks that are fueled by gasoline, diesel, and E85 emit both greenhouse gases and smog-forming pollutants from their tailpipes.

Electric and hydrogen fuel cell vehicles do not produce tailpipe emissions. Emissions that are related to the production of the fuel used to power vehicles are known as “upstream” emissions. Visit our Beyond Tailpipe Emissions Calculator for specific information on upstream emissions from electric vehicles.

Environmental Ratings on the Label

The Good News ... Vehicles are getting more efficient. 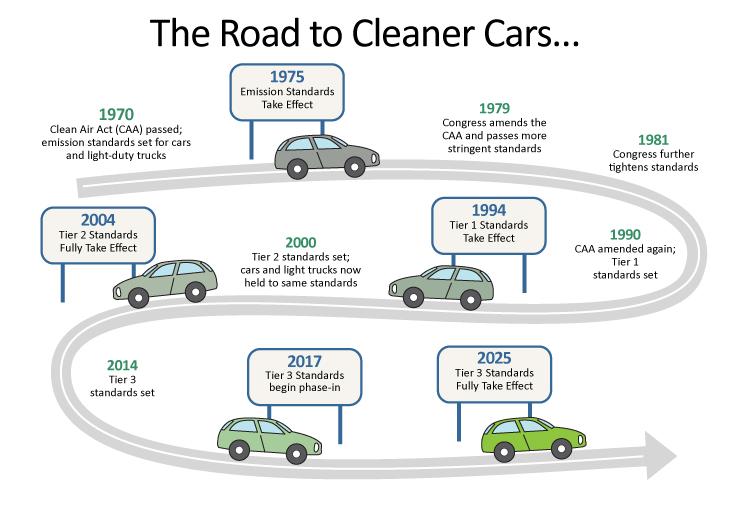 Text-only version of this infographic

With the passage of the Clean Air Act (CAA) in 1970, the EPA began regulating nitrogen oxide (NOx) emissions from light duty vehicles. The CAA was amended in 1990, and new emission standards were set for four additional smog pollutants:

The amendments also gave California authority to pass its own stricter vehicle emission standards, due to its particularly worse air pollution issues. EPA must approve California’s waiver for stricter standards. States may choose to follow either the federal or California standards.

What vehicles are covered under the smog regulation for cars and light duty trucks? 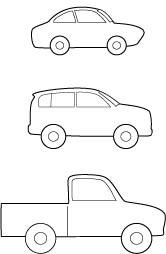 The light duty smog regulations cover passenger vehicles with a gross vehicle weight rating (GVWR) up to 10,000 pounds. GVWR is different than just the weight of a vehicle. It also includes what the vehicle is safely able to carry (i.e., the weight of passengers, cargo, and any optional accessories). This class includes small sedans (e.g., Honda Accord), small pickup trucks (e.g., Ford F-150), and large SUVs (e.g., certain configurations of the Chevrolet Suburban).

EPA first set greenhouse gas emission standards for vehicles in 2010, which took effect in MY 2012. The standards were revised in 2012, extending them beyond MY 2016. Learn more about the process here.

EPA has lowered the amount of pollution light duty vehicles can emit multiple times since the first standards were set in 1970. EPA termed the first emission standards for cars and light trucks “Tier 1” Standards, with Tier 2 and Tier 3 as subsequent updates to the standards. Nearly all cars on the road today are held to either the current Tier 3 standards or the previous Tier 2 standards. The oldest cars on the road (model years 2003 or older) are held to Tier 1 standards.

The current Tier 3 standards are gradually being phased in starting in MY 2017. Tier 3 marks the first time federal and California emissions standards are fully aligned since the initial standards were enacted.

Automakers choose to certify each car model to one of EPA’s smog rating standards, also known as “bins,” but the automaker’s fleet as a whole must meet a specified average. Vehicles certified to a specific bin cannot exceed the amount of pollution specified for that bin. For example, if a vehicle is certified to Bin 50, it cannot emit more than 0.05 grams of NOx + NMOG, 1.7 grams of CO, 0.003 grams of PM, and 0.004 grams of HCHO per every mile it drives.

Emission standards have made our air cleaner . . . 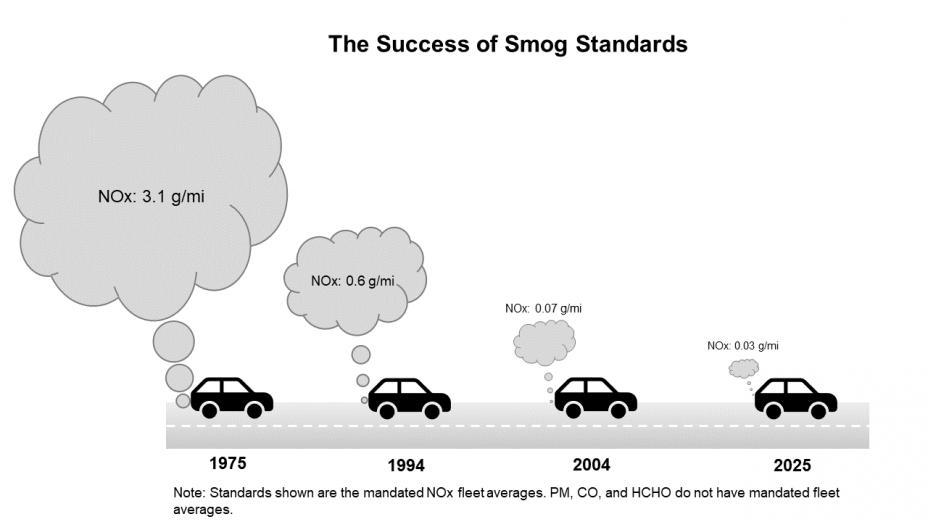 But NOx pollution is still a problem . . .

Cleaning up the light duty fleet has put us on a successful path to a cleaner, healthier transportation future. Moving forward, there will be new ways to get around, such as ridesharing, driving zero emission vehicles (like electric and hydrogen fuel cell vehicles), or riding an electric bike (or scooter) that may be even cleaner.