What if Garbage Fumes Powered More of Our Cars, Trucks, and Buses?

There are over 1,000 large landfills in the United States1. If you’ve ever driven past one, your nose will tell you that those piles of garbage are emitting gas. Landfill gas, which is a biogas— composed primarily of methane and carbon dioxide—isn’t just stinky, it also contributes to global climate change. Large landfills are required to collect and burn their biogas to reduce the amount of unhealthy fumes they emit. But biogas has more beneficial uses. It can be converted to compressed natural gas or hydrogen, or be used to generate electricity. As more and more cars, trucks, and buses start to operate on these alternative fuels, it seems a waste to send any of our biogas up in smoke. What if we converted all available U.S. garbage fumes from large landfills into transportation fuel? 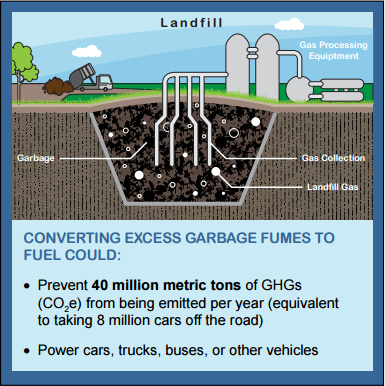 Some U.S. landfills are already collecting biogas for use in energy projects2. EPA estimates that there are about 450 landfills with untapped potential to use their garbage fumes. These landfills could collect an approximate total of 475 million cubic feet of biogas per day — enough to fill nearly a billion party balloons.

If we converted all this biogas to transportation fuel, we could prevent about 40 million metric tons of direct GHG emissions (CO2e) from being released each year, equivalent to taking 8 million cars off the road.3

Plus, because we are displacing gasoline or diesel, we would also reduce lifecycle GHG emissions associated with producing and distributing the fuel used by those vehicles.

If your local landfill is large, it may be emitting enough gas to produce up to 3,200 gallons gasoline equivalent (GGE) of transportation fuel each day. (One GGE is the amount of fuel that contains the same energy as one gallon of gasoline.) How many vehicles would this power?

*The higher number of electric cars (EVs) reflects both that cars consume less fuel per mile than garbage trucks or buses and that EVs today have a limited driving range per battery charge. We assumed a fully charged EV battery would power about 100 miles of driving.

Here are a few real-world examples of how this can work.

Even more opportunities will emerge as additional cars, trucks, and buses that use advanced fuels enter the market. So, next time you are driving by a landfill, don’t just think, “Ewww!” think, “smells like a refueling opportunity!”

A PDF version of this page, optimized for printing