The naturally occurring element manganese can be found in rocks and soil, and in trace amounts is essential for good health. A key ingredient in welding and industrial steel making, it can however cause serious neurological problems at high levels of exposure (ATSDR 2012). Although occupational exposure is the biggest concern, communities located in close proximity to industrial sources can also be at risk of health impacts, primarily through the air. 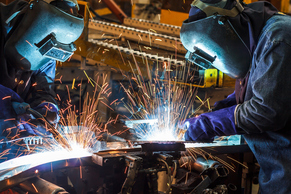 Three eastern Ohio towns have been the focus of ongoing EPA, State, and local research to look at how ambient airborne manganese can impact health in a community setting.

Building on this body of work, Agency researchers and their partners recently completed a first of its kind study looking at medication use as a way to assess manganese health impacts in communities. A separate study examined how children may come into contact with the element in and around their homes.

Beginning in 2009, researchers at San Francisco State University tested blood and carried out various physical and psychological health assessments in Marietta, OH, a community near a smelting operation that emits manganese. To compare, they repeated that work in Mount Vernon, OH, a similar community without a major source of airborne manganese. In 2011, EPA followed up with a similar study in East Liverpool, OH, where ambient manganese levels are also a concern.

“There was an amazing amount of cooperation throughout the project. This was a Regional Applied Research Effort (RARE) with EPA Region 5. Through this project, we partnered with the Region 5 EPA office, partners at the Agency for Toxic Substances & Disease Registry, the Ohio Department of Health, and local health departments to improve our understanding of environmental manganese exposure and related health effects in a community setting,” says Danelle Lobdell Ph.D., an EPA epidemiologist who helped lead the air manganese study in Ohio. “Prior to this work, researchers had focused mainly on occupational exposures.”

Initial findings indicated that greater exposure to manganese and proximity to an emissions source were related to reduced neuropsychological and motor functions.

Self-reporting of medical concerns can be a relatively cheap and simple way to gather medical data, but is often hindered by study participants’ subjective and selective memory of symptoms. Tracking medication use can provide a more accurate picture.

EPA also collaborated on a University of Cincinnati-led study published earlier this year that looks at how Marietta children aged seven to nine might come into contact with manganese. In 2009, soil, household dust, and hair samples were collected and tested for manganese by the Communities Actively Research Exposure Study (CARES) team of academic researchers and community members. The concentration in processed children’s hair samples is what’s called a “biomarker,” and can indicate long-term exposure and inhalation. Using these samples and estimated ambient levels, researchers were able to determine the most likely ways children end up inhaling manganese in and around their homes.

Manganese levels in household dust appeared to be the clearest indicator of levels in children’s hair. That is, if a house’s dust contains high levels, then researchers would expect to find high levels in the hair of children living there, and likely greater inhalation exposure.

The researchers also found that the level of manganese in nearby soils, ambient manganese, and the time children spend outside all are associated with levels in household dust, and therefore also associated with exposure in children.

These findings indicate that indoor air quality is an important part of controlling exposure to manganese. 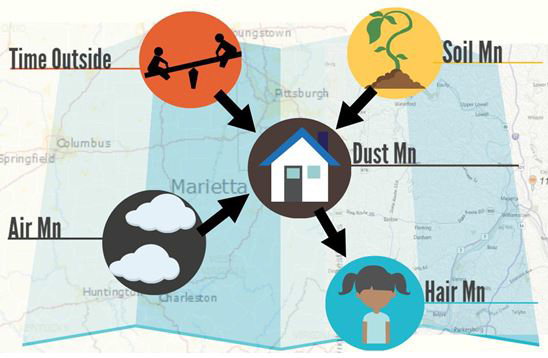