"EPA was fortunate to have, as its first Administrator, an extraordinary public servant who gave direction and momentum to the fledgling environmental agency."
-- President Ronald Reagan, May 18, 1983 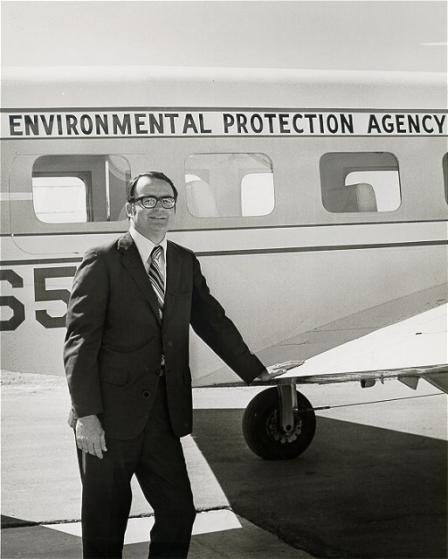 Ruckelshaus touring the Four Corners area, 1971.William Ruckelshaus was the first Administrator of the EPA, appointed by President Nixon when the agency was created in 1970. He compiled an astonishing list of accomplishments in three short years:

During the 1960s, smog in many cities had become deadly and rivers were so polluted they caught on fire. Ruckelshaus helped set the nation on a new path to protect and preserve our environment, and in turn, our health. And he established a set of core values that still drive this agency today: respecting the law, following the science, and operating openly and transparently.

In 1973, he was tapped to serve as Acting FBI Director, and soon after as Deputy Attorney General—a position which spanned the Watergate crisis and from which he resigned as a matter of integrity and principle. In 1983, Ruckelshaus returned to EPA for a second stint in which he launched our Superfund program—initiating clean-up of thousands of contaminated sites across America. He also started work on Chesapeake Bay protections, and set the agency on a course to address the challenge of acid rain.

EPA remembers Ruckelshaus for his integrity, leadership, and commitment to protecting public health and the environment.

Biographies and Articles about Administrator Ruckelshaus