Why is the cleanup of the upper Hudson River needed?

The 315-mile Hudson River is steeped in American history. It guided Henry Hudson in search of a northwest passage and served commerce as a transportation route during the Industrial Revolution. Industry provided jobs, created communities, and brought economic growth to the region. However, an era of industrial pollution left its mark on the treasured river. Today, 200 miles of the Hudson River is classified by EPA as a Superfund site – one of the largest in the country.

Polychlorinated biphenyls, or PCBs, were widely used as a fire preventive and insulator in the manufacture of electrical devices, like transformers and capacitors, because of their ability to withstand exceptionally high temperatures. During a 30-year period ending in 1977, when EPA banned the production of PCBs, it is estimated that approximately 1.3 million pounds of PCBs were discharged into the Hudson River from two General Electric (GE) capacitor manufacturing plants located in the towns of Fort Edward and Hudson Falls, New York. Once PCBs entered the river, they were deposited and mixed with the sediments at many locations on the river bottom and at some locations along the shoreline in the floodplain.

Actions Prior to EPA's 2002 Record of Decision

PCBs build up in the environment (bioaccumulate), increasing in concentration as they move up the food chain. The primary health risk associated with the site is the accumulation of PCBs in the human body through eating contaminated fish. Since 1976, high levels of PCBs in fish have led New York State to close various recreational and commercial fisheries and to issue advisories restricting the consumption of fish caught in the Hudson River. PCBs are considered probable human carcinogens and are linked to other adverse health effects such as low birth weight, thyroid disease, and learning, memory, and immune system disorders. PCBs in the river sediment also affect fish and wildlife.
In 1984, 200 miles of river, between Hudson Falls and the Battery in New York City, was placed on EPA’s National Priorities List of the country’s most contaminated hazardous waste sites.
Today the Hudson River exists as one of the most extensively studied rivers in the country, having been monitored almost continuously for a period of more than 25 years. Ongoing evaluations of water quality, sediment, air quality, fish, and wildlife by the Federal Government and the State of New York demonstrated that the river was not cleaning itself and PCBs in the sediment posed a serious risk to human health and the environment. Studies conducted to evaluate the extent of the problem revealed that most of the contaminated sediments were in “hot spots” situated in a 40-mile stretch of the river between the town of Fort Edward and the Troy Dam.

What’s being done to address the contamination?

In February 2002, the EPA issued a Record of Decision (ROD) for the Hudson River PCBs Superfund Site that called for targeted environmental dredging of approximately 2.65 million cubic yards of PCB-contaminated sediment from a 40-mile section of the Upper Hudson River from Fort Edward to Troy, NY. Dredge areas were identified using the results of a multi-year sediment sampling program conducted by GE that began in 2002 and generated more than 60,000 sediment samples taken from the bottom of the Upper Hudson River.

The site is divided into the Upper Hudson River, which runs from Hudson Falls to the Federal Dam at Troy (a distance of approximately 40 miles), and the Lower Hudson River, which runs from the Federal Dam at Troy to the southern tip of Manhattan at the Battery in New York City. For purposes of the dredging project, the EPA further divided the Upper Hudson River area into three main sections known as River Section 1 (from the former Fort Edward Dam to the Thompson Island Dam), River Section 2 (from the Thompson Island Dam to the Northumberland Dam), and River Section 3 (from the Northumberland Dam to the Federal Dam in Troy). Within the river sections, dredging was conducted in areas of approximately five acres each, called “certification units” (CUs).

The dredging of river bottom sediment began in 2009 and was completed in fall 2015. The dredging occurred in two phases. The first, year-long phase of dredging occurred between May and November 2009. During Phase 1(PDF), approximately 283,000 cubic yards of contaminated sediment was removed from a six-mile stretch of the Upper Hudson River near the town of Fort Edward, NY. After an extensive evaluation by an independent panel of scientists and input from a broad range of stakeholders in 2010, the EPA developed plans for the second part of the cleanup.

Phase 2 began in June 2011 and was conducted at full production to remove the remainder of the contaminated river sediment targeted for dredging. During Phase 2, approximately 2.5 million cubic yards was dredged. In all, over six seasons of dredging, approximately 2.75 million cubic yards of PCB-contaminated sediment was removed from the river bottom. The 2015 Phase 2 Overview fact sheet (PDF) includes a series of maps which show the locations where dredging took place.

Some areas were repopulated with aquatic plants in the growing season following the year in which the area was dredged. Habitat reconstruction followed the completion of dredging and continued into 2016.

Both phases of the cleanup were conducted by GE under the terms of a November 2006 legal agreement. In December 2010, GE agreed to conduct and pay for the second phase of cleanup. All of the dredging and related work was conducted by GE with EPA oversight. 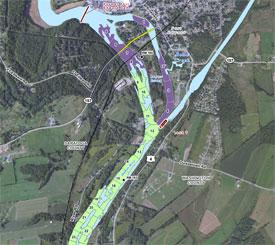 GE’s 100-acre processing facility in Fort Edward, which was built to process and transport the dredged material offsite, was also taken apart and decontaminated in 2016 in accordance with an EPA-approved facility demobilization and restoration plan. The properties upon which the GE facility was built are in the process of being returned to their respective owners. The primary property owner is exploring opportunities for reuse of the site to support future economic development in coordination with the Town and Village of Fort Edward.

The 2002 Record of Decision, which called for dredging in a 40 mile stretch of the Upper Hudson River, also stated that PCB-contamination in low-lying shoreline areas subject to flooding, called the floodplain, must also be evaluated. As the dredging project transitions to the long-term monitoring phase, a comprehensive study of the contamination in the floodplains is underway. The comprehensive investigation will include an assessment of cleanup options. (See Investigating the Floodplain for more information.)

Operation, Maintenance and Monitoring Program (OM&M)
The EPA’s two-part cleanup plan called for targeted environmental dredging followed by a period of monitored natural recovery. With the completion of dredging, the project has transitioned from the dredging phase to a robust monitoring phase that will track the long-term recovery of the river over time to confirm that the cleanup is functioning as intended. This includes monitoring of sediment, fish, water, reconstructed habitats, and the caps that were placed in some of the areas of the river where PCBs remained. The EPA will also continue to conduct five-year reviews of the project.
The Operation, Maintenance and Monitoring program includes the following components:

Sediment Monitoring:
Sediment monitoring will also continue in order to assess PCB concentrations over time in the sediment throughout the Upper Hudson River in dredged and non-dredged areas.
Sediment samples will be collected every 5 years to monitor the recovery.

Habitat Monitoring:
Some dredge areas were repopulated with aquatic plants in the growing season following the year in which the area was dredged. The habitat replacement program was designed to limit impacts and restore the function of river habitats from the dredging project and includes reconstruction, replacement, and/or stabilization of river bottom, submerged aquatic vegetation, wetlands, and shoreline areas.
The evaluation of habitat begins immediately after planting is completed. Each habitat type is being evaluated, including submerged aquatic vegetation (SAV) and riverine fringing wetland (RFW). Evaluation criteria has been established for each habitat type. Aquatic organisms in the dredged areas are monitored.

Cap Monitoring:
Following completion of the dredging operations, monitoring will continue to be conducted to assess the long-term effectiveness of the caps that were placed on the river bottom to isolate small amounts of PCBs that remained after dredging. Surveys will be conducted to evaluate the cap at one, five and ten years after the cap was put into place and will continue at ten-year intervals into perpetuity. Surveys will also take place after high flow events. 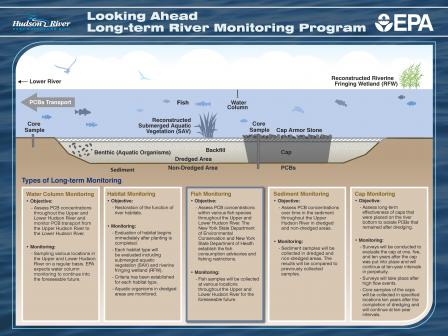 Five-Year Reviews
Under the Superfund law, five-year reviews are required when hazardous substances, pollutants or contaminants remain at a site that would not allow for unrestricted use. The purpose of the five-year review is to ensure that implemented remedial actions are working as intended and are protective of human health and the environment.

The first five-year review for the Hudson River PCBs Superfund site was completed in June 2012. The Proposed Second Five-Year Review report was provided to the public in June 2017 and included a public comment period. The final version of the report was released in April 2019. These five-year reviews addressed Operable Units (OU) 1 and 2 (Upper Hudson in-river sediment and the Remnant Deposits). Five-year reviews will continue and will eventually include OU 4 (Upper Hudson River floodplain), once the floodplain cleanup decision is made.