What is the status of the Charlotte and Ream Streets, and Maple Street Commerce site investigations near the former Hoover plant?

EPA, in coordination with the City of North Canton, North Canton City Schools (NCCS) and Maple Street Commerce (MSC) are working together to determine the status of possible contamination along Charlotte and Ream Streets.

EPA continues overseeing the investigation and cleanup activities on the former Hoover site, owned by MSC.

Ohio EPA and the Stark County Health Department have been kept informed of progress being made at the site.

Has there been sampling at these sites?

Separately, the North Canton City School District (NCCS) performed a Phase I and II Environmental Site Assessment at the property located at the intersection of Charlotte and Ream Streets; NCCS had plans to redevelop the property and, given current knowledge of impacts related to the Hoover site, they felt it was prudent to check conditions there. NCCS conducted additional sampling at the property in December 2020.

EPA shared with NCCS that MSC was also in the process of evaluating the potential for vapor intrusion in the area.

Out of an abundance of caution, and based on their results, NCCS plans to install vapor mitigation controls, including an enhanced vapor barrier and venting system, below the proposed new building to create a barrier between the ground and the concrete foundation and to extract vapors from below the building to maintain air quality.

Will there be additional testing?

MSC has agreed to install permanent sampling points along Ream Street. Existing buildings in the area will also be sampled. Based on sampling results expected by February 2021, EPA, City of North Canton, NCCS and MSC together will determine what additional steps may be needed.

One of those steps is expected to be identification of the source of the identified impacts. Other steps may include continued monitoring or interim remedies for affected buildings.

What is EPA’s role?

Pending future testing results, EPA could have a role at the Charlotte and Ream Street site if it is determined that the impacts are related to Hoover. EPA plans to coordinate with NCCS as environmental work is done in the area.

EPA will continue to provide direction on environmental issues, which may include a revised cleanup plan, or the use of vapor mitigation controls as an Interim Remedy related to the overall Corrective Measures for the Hoover site.

EPA will continue to share information on the projects progress with residents of North Canton.

Groundwater Sampling – Through 2006, Hoover’s risk assessment identified volatiles as the primary contaminants in groundwater, with sampling continued to evaluate whether a reduction in contaminant levels through natural processes was occurring. Resumed assessment in 2015 and 2016 identified that concentrations of volatiles continued to decrease in off-site wells and most on-site monitoring wells. The Stark County Health Department recently assisted U.S. EPA in reaffirming that no groundwater usage is occurring within an area west of the site where groundwater use is restricted. Additional data will continue to be collected under the May 2016 Administrative Order on Consent, or AOC, to further characterize the magnitude and extent of contamination, and evaluate additional areas that were not investigated during Hoover’s past assessments, to ensure that the potential for vapor intrusion is adequately addressed.

Investigation report status – Sampling reports for groundwater, soil gas, indoor/ambient air, and soil investigations by Maple Street Commerce were completed between 2015 and the present and are available at the North Canton Public Library, along with Hoover’s past reports. Additional reports will be completed under the AOC, and the information repository at the library is updated as new information becomes available. Major documents will be added to this webpage via web links.

Air monitoring – U.S. EPA’s Air Division, ATSDR, and Stark County Health have been briefed with sampling results for indoor air samples collected in occupied and unoccupied spaces on-site. Maple Street Commerce has provided sampling results to tenants. Mitigation systems were designed for one off-site building and one on-site building where contamination in indoor air was detected. If appropriate, mitigation systems will be installed in other areas to ensure that contaminant concentrations in air remain acceptable, as required under the AOC.

Next steps – In May 2016, Maple Street Commerce signed an Administrative Order on Consent with U.S. EPA. The AOC requires that certain activities be performed and reports be submitted to demonstrate that contamination left behind by Hoover does not pose a risk to site visitors or to off-site areas.

Maple Street Commerce was directed to take appropriate action after identifying contamination in indoor air at one off-site property. In addition, Maple Street Commerce has prepared a work plan for the installation of a Sub-slab Depressurization System (SSDS) in one of the redevelopment buildings to prevent contaminated vapors in the ground from entering the building. U.S. EPA approved the report with conditions to expedite and facilitate the on-going redevelopment activities. Since the system will include below-ground components, it will likely be installed before the construction is completed.

Under the AOC, Maple Street Commerce will continue to complete investigation activities to determine the nature and extent of contamination, and appropriate controls to address contamination. Additional investigation activities were proposed in a revised RFI Work Plan, dated July 31, 2018, which was approved by EPA. Multiple phases of RFI work have been completed, leading to further evaluation of the sewers in on-site and off-site areas (air sampling results from certain sewers are shown in the January 2020 Sewer Gas figure below). 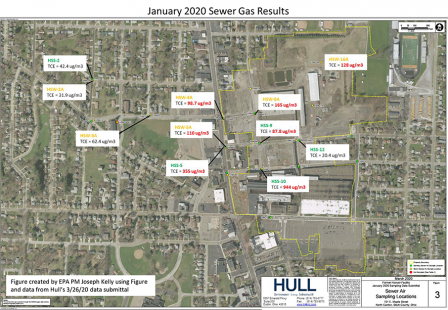 Contacts for this cleanup:

Since the time of Hoover’s work, the property was sold, and Maple Street Commerce in continuing the Corrective Action work initiated by Hoover to prevent unacceptable risks under an Administrative Order dated May 24, 2016.

In the late 1980s, Hoover conducted investigation activities in connection with the closure of their hazardous waste drum storage area. The investigation identified solvent contamination, and additional phases of investigation were performed. In the late 1990s, Hoover entered into a Voluntary Corrective Action Agreement with U.S. U.S. EPA to complete Corrective Action for the identified site-wide impacts using a risk-based approach. Sampling results included in a 2003 Final Corrective Measures Proposal identified primarily PCE, TCE and degradation products in the on-site soil and groundwater, extending off-site to the west, in addition to PCBs and other contaminants in on-site soils. A groundwater use restriction was developed by Hoover and implemented by the Stark County Health Department (Resolution #3-2002) to prevent the ingestion of contaminated groundwater. On-site soil contamination was addressed through:

The SVE/DPE systems were operated until the company achieved a calculated risk reduction goal, at which point the systems were shut down. The Final Corrective Measures Proposal concluded the risks could be addressed by implementing combinations of land-use restrictions as institutional controls on certain portions of the property. A Statement of Basis was prepared by U.S. EPA in 2004 based on Hoover’s information, and the company entered negotiations with U.S. EPA on institutional controls for the Hoover property. The property was subsequently sold several times before purchase by Maple Street Commerce in 2008. In 2010 concerns arose regarding the potential for vapor intrusion at the site, and over the next several years, various correspondences were prepared, negotiations occurred, and sampling was performed, ultimately resulting the execution of an AOC for Corrective Action in May 2016.

Contaminants at this Facility

Institutional and Engineering Controls at this Facility

Land Reuse Information at this Facility

Site Responsiblity at this Facility

Corrective Action activities at this facility have been conducted under the EPA, with support from the Ohio Environmental Protection Agency.