The former Koppers Wood-Treating Site is located in the northeast corner of Carbondale, IL. In 1986, EPA issued an Administrative Order on Consent for the facility under EPA’s Resource Conservation and Recovery Act (RCRA).  In 1986, the State of Illinois also issued a consent decree similar to the EPA Order.  The Order said that Koppers must perform a Remedial Investigation to determine the nature and extent of any releases of hazardous waste from the facility. The company was also required to

The site is currently owned by Beazer East, Inc.

Since the remediation at the former wood-treating site began on Oct. 14, 2020, 838 truckloads or 22,552 tons of contaminated soil have been sent to the DeSoto, Ill. landfill for containment.  All land-clearing in preparation for the next remedial steps has been completed. The remediation is around 60% completed.  For more details, see Soil Remediation Progress Reports #8 and #9.​ 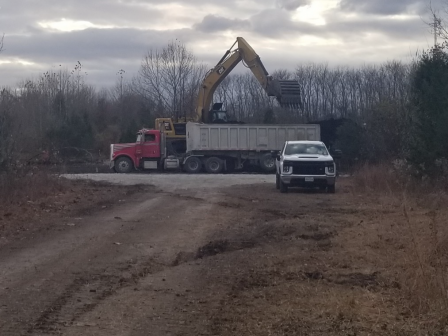 Truck headed to landfill being filled with contaminated.

On Oct. 14, 2020, Beazer East, Inc. began land clearing in preparation for the remediation of an additional 16 acres of soil contaminated with dioxin/furan compounds at its former plant. Remediation will consist of soil  excavation and off-site disposal, and soil cover. EPA required this cleanup in a Sept. 29, 2019 Explanation of Significant Difference (PDF) (22 pp, 807 K, About PDF). The remedial work was delayed due to an Army Corps of Engineers permit requirement that no land-clearing work be done between April and October to protect bat species. The cleanup work is expected to finish in January 2021, depending on weather.

EPA required site-wide soil delineation for dioxin/furan contamination following the 2004 Final Decision, based on new toxicity values for dioxin and concern that these compounds may not have been methodically considered in the original 1991 Remedial Facility Investigation.  An ecological risk evaluation using the new data demonstrated potential risk to the environment. A new human health risk assessment demonstrated that the residual soil contamination will meet industrial/commercial risk standards following the additional 16 acres of soil cleanup.

Between 2004 and 2010, Beazer East, Inc. completed several remedies required under the original 2004 Final Decision. In the Final Decision, EPA selected a remedy that required Beazer to:

The creosote recovery and MNR remedies continue to operate.

Contacts for this cleanup:

The former Koppers Wood-Treating site located in the northeast corner of Carbondale was at one time the largest wood-treating plant in the world. Surrounding land use is agricultural, light industrial and residential.  The plant was built around 1902 and closed in 1991. Over this period, railroad cross ties, utility poles and other wood products were treated with a variety of wood preservatives including creosote, pentachlorphenol, and arsenic.  During handling and storage of chemicals, they were spilled and released, resulting in the pollution of soil, groundwater (water in soil and rock), creeks, and a small pond on the site. In 1939, a tank containing creosote was intentionally drained and released to the ground during a fire to prevent a catastrophic explosion.

Beazer East Inc., the current owner of the property, has conducted several studies at and around the site to learn the type and amount of contamination released to the environment and where it was located.   This work was done under the supervision of first the Illinois Environmental Protection Agency, then the U.S. Environmental Protection Agency. The U.S. EPA issued a cleanup proposal called a Statement of Basis for public review in August 2003.  EPA selected the final remedy and issued a Final Decision and Response to Comments document in June 2004.

Beazer constructed the selected remedies between 2004 and 2010.  The remedies to recover creosote from underground continue to operate.  The site will be monitored for at least 30 more years.

In 2019, EPA required remediation of an additional 16 acres of soil remediation based on dioxin/furan contamination.

Contaminants at this Facility

Site Responsiblity at this Facility

RCRA Corrective Action activities at this facility are being conducted under the direction of EPA Region 5.