EPA’s Brownfields Program helps communities assess and clean up brownfield sites so they can be sustainably reused. In Iowa, more than 125 sites have been assessed using federal resources. While some require oversight, others need less redevelopment intervention.

A brownfield is a property or site where suspected contamination has prevented its use or redevelopment. Cleaning up and reusing these sites increases property values, job growth, and local tax revenues.

Riverfront Park in Manchester was once the site of Smitty’s Appliance, an auto service shop, and accompanying gas station. It sat abandoned for over 40 years. The site was included in a larger plan to redevelop the area that runs alongside the Maquoketa River, which travels through the community and was connected to a hydroelectric dam. This historic low-head dam was deemed a safety hazard for recreational use of the river and was removed in 2014.

Manchester’s Riverfront Park. (Photo credit: City of Manchester.)Part of the plan to redevelop the area included making the river more accessible and safer to use, along with the creation of a whitewater flow for recreational use. Running alongside the Maquoketa River, the Manchester Brownfield Site had underground storage tanks, the contents of which were unknown.

“It’s the fear of what’s there, potentially hazardous contaminants, that prevents people from using the property,” said Jennifer Morris, EPA Region 7 project manager for the site.

Mel Pins, Brownfields program manager for the Iowa Department of Natural Resources (IDNR)Exit, discovered the underground storage tanks, and following an assessment, found that their contents were non-hazardous. The assessment did, however, indicate the presence of asbestos materials on the property, the cleanup of which was funded by a cost-match grant from EPA.

“The Brownfields Program was instrumental in getting rid of hurdles that were in the way of them realizing their vision. They could approach their redevelopment project confidently and safely because we assisted with this assessment and cleanup funding,” Pins said.

Following the cleanup of the Manchester Brownfield Site in 2019, Riverfront Park has been transformed into a bustling public access point for the city’s Whitewater ParkExit. And where Smitty’s Appliance once blocked access to the Maquoketa River, with help from EPA, the site now serves as an access point, complete with amenities such as public restrooms, showers, event space, walking and biking trails, and kiosks telling the story of the park. EPA’s contribution of nearly $38,000 resulted in area redevelopment totaling over $1.3 million.

In 2005, Council Bluffs received an EPA Brownfields Assessment Grant to evaluate one of the Harvester Warehouses.

Artspace, a nonprofit real estate developer focused on creating affordable spaces for artists, hoped to revitalize the 100-year-old abandoned industrial warehouse. Council BluffsExitused the $200,000 grant to assess the environmental hazards at the site in 2006. 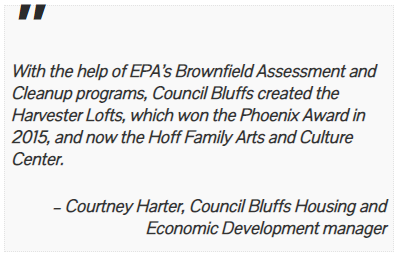 Due to railroad activity, the abandoned brick warehouse in the heart of the city’s industrial district was impacted by heavy metal and polycyclic aromatic hydrocarbon (PAH) contamination in its upper soils. The Pottawattamie County Development Corporation (PCDC) purchased the property in 2003 and enrolled in the IDNR Voluntary Cleanup Program. IDNR awarded PCDC a $23,000 EPA Brownfields Cleanup Grant, which assisted in soil cleanup at the site in late 2008.

The contributions of different organizations working together makes the redevelopment of these brownfield sites so successful. “We like to help turn brownfields from obstacles into opportunities,” Pins said.

The combined efforts proved fruitful. The renovation of the warehouse was completed in July 2010 and includes 36 residential lofts, an artist’s studio, office space, art galleries, and showrooms. While the goal was to create a mixed-use space where artists can live, create and work, redevelopment of the Harvester Warehouse also contributed to an area-wide revitalization of downtown Council Bluffs. 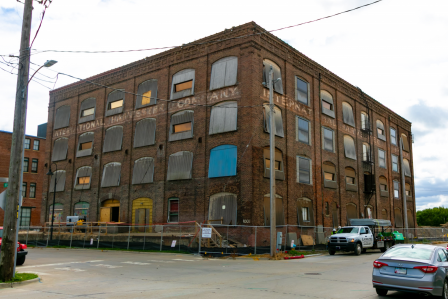 BEFORE: Harvester II Warehouse. (Photo credit: City of Council Bluffs.)Following the successful development of the first Harvester Warehouse, the city used another $200,000 award to assess and clean up a second one, which was built in the 1890s and used as an agricultural implement warehouse until about 1968. It was then used by a video equipment rental business and as a storage facility. The property was contaminated with PAHs, metals, volatile organic compounds, and asbestos.

“To clean up the second Harvester building, the city of Council Bluffs and I worked with the state of Iowa Historic Preservation Office to ensure that historic features of the building were protected during the abatement of asbestos,” Morris said. “Later, when I visited the site during its redevelopment by PACE, I experienced the grandeur of the preserved windows in the open concept function hall. The second life of the building is transforming the industrial downtown of Council Bluffs and is becoming a destination for education, entertainments and events for diverse patrons.”

Courtney Harter, Housing and Economic Development manager for Council Bluffs, echoed these sentiments: “Fifteen years ago, the Harvester buildings were vacant warehouses that many believed should be demolished. Local leaders had a vision for this area that would spotlight its uniqueness and save the historic buildings. With the help of EPA’s Brownfield Assessment and Cleanup programs, Council Bluffs created the Harvester Lofts, which won the Phoenix Award in 2015, and now the Hoff Family Arts and Culture Center. Without the Assessment and Cleanup programs, no developer would be willing to create projects of this magnitude on the previously contaminated ground. 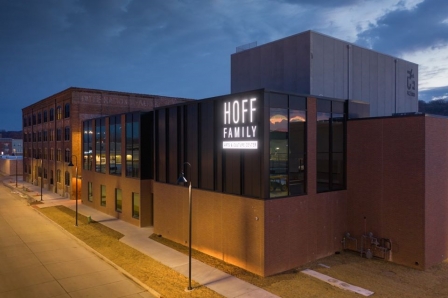 AFTER: Hoff Family Arts and Culture Center. (Photo credit: Pottawattamie Arts, Culture and Entertainment.)“The completion of the $27 million Hoff Center showcases the importance of EPA’s program to identify opportunities and mitigate contamination that may stand in the way of redevelopment. We are incredibly grateful to EPA for its continued support of Council Bluffs and the impact made in our community.”

On June 15, 2008, floodwaters crested the Coralville Reservoir at 31½ feet, the highest ever recorded. Residents of Iowa City had only five days’ notice before this 500-year flood event covered 1,600 city acres. Volunteers from the city and the University of Iowa filled more than 100,000 sandbags per day, amounting to over 1 million bags by the time the flooding stopped. 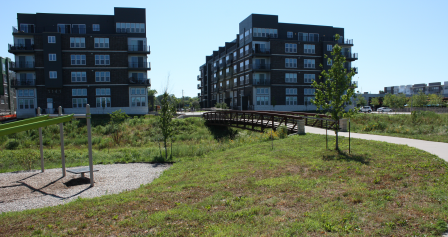 The Riverfront Crossings District (RCD)Exitsustained immense flood damage. In 2009, EPA partnered with Iowa City along with the Federal Emergency Management Agency (FEMA) and the Rebuild Iowa Office, a state agency formed to assist in post-flood rebuilding, to create a Market Study Overview, Transportation Options Memo, and urban design options for the flood-damaged areas of the RCD.

The next year, the city applied for additional EPA assistance and was chosen as one of five cities nationwide to participate in a Brownfields Pilot Project. The project centered on development planning.

Partners and support agencies included:
Together, these partners developed a plan for the RCD with six primary goals:

In 2011, after drafting the initial redevelopment plans, the Iowa City community took the lead. They completed the Riverfront Crossings Park master planExitin 2015. Ralston Creek was restored in 2017. Wetlands and trails were created as part of the restoration. And a nature play area was completed in 2018. 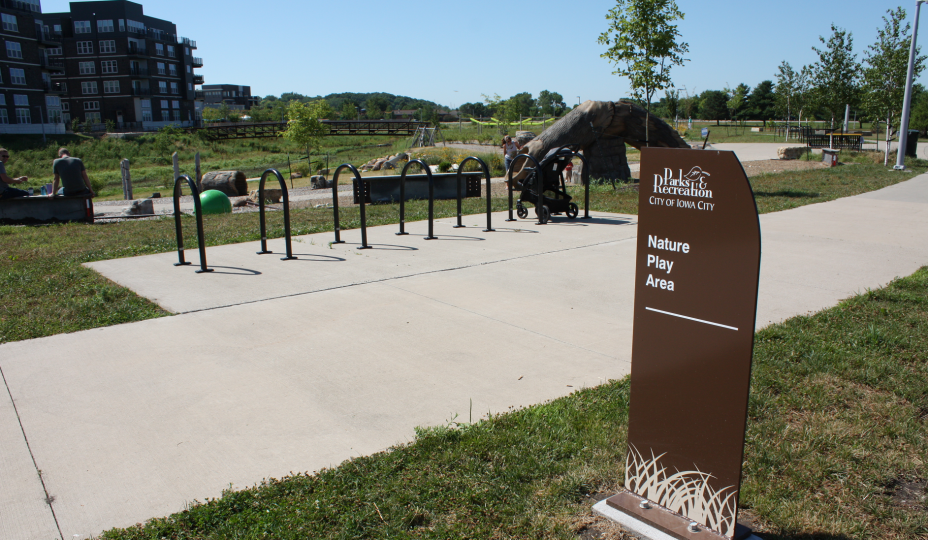 Riverfront Crossings Park in Iowa City. (Photo credit: David Doyle, EPA.)“The difference between what is there now and what was there 10 years ago is incredible,” said David Doyle, community revitalization coordinator for EPA Region 7. “EPA aided in plans for long-term recovery, focusing on how to rebuild in a sustainable way. The city took those plans and expanded them, spending well over $100 million. It’s a great success story, and they plan to continue to build alongside the river and attract new development in the future.”

Today, the RCD is home to retail, restaurants, housing and breweries, with plans to continue building in the area.

“One of the highlights of my planning career was the Riverfront Crossings work that was funded by EPA. The plan has been very useful to the city and is helping transform the area into a cool urban neighborhood,” said Robert Miklo, former Iowa City senior planner.

EPA Region 7 is committed to assisting communities with improving and revitalizing brownfield sites, regardless of the project scale. While some sites may require continuous support, others may simply require the assurance established by site assessments, which help community partners attract investors. And investment turns dreams into reality. The development of mixed-use spaces at former brownfield sites brings people together to create vibrant, active communities.

As Iowa City, Council Bluffs, and Manchester demonstrate, Brownfields cleanup and revitalization does much more than transform abandoned, contaminated properties; it contributes to millions of dollars in leveraged redevelopment, ultimately transforming the communities within which they reside. Brownfields redevelopment encourages the creation of community through space.