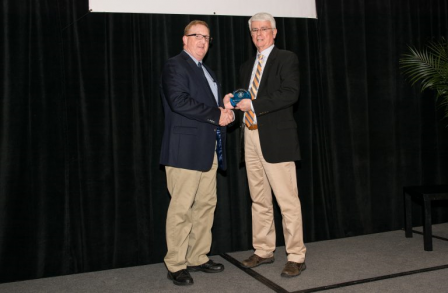 Awardee with EPA Region 7 Administrator Jim Gulliford (click to enlarge)Since 1952, the Iowa City Veterans Affairs Health Care System (ICVAHCS) has improved the health of the men and women who so proudly serve our nation. We consider it our privilege to serve their health care needs in any way we can. The ICVAHCS facility consists of a comprehensive Tertiary Care Level I VA Medical Center, which also acts as an affiliated teaching hospital and research center; 10 VA Clinics; and two Homeless Veterans Outreach Centers. With an operating budget of around $294.5 million, the system serves more than 50,000 veterans residing in 50 counties spread throughout eastern Iowa, western Illinois, and northern Missouri. The ICVAHCS currently employs around 1,800 professionals and is affiliated with the University of Iowa’s Carver College of Medicine for residencies and education.

The ICVAHCS has undertaken pollution prevention efforts for some time. For example, interior lighting motion-detection systems were installed throughout the facility, support buildings (Boiler Plant, Chiller Plant, etc.), and outdoors. This led to a major, interior lighting project inside the main hospital building during fiscal year (FY) 2017. Over 4,500 fluorescent light fixtures were replaced with LED fixtures at a cost of approximately $350,000, thanks to a $300,000 rebate from the local electric utility company, MidAmerican Energy Company.

Facility design and engineering staff members are continually looking for ways to reduce costs, waste, etc. When the local electric utility company announced this rebate program, design staff members jumped at the chance to complete the LED conversion in the main hospital building. The annual savings associated with this project is $146,792. 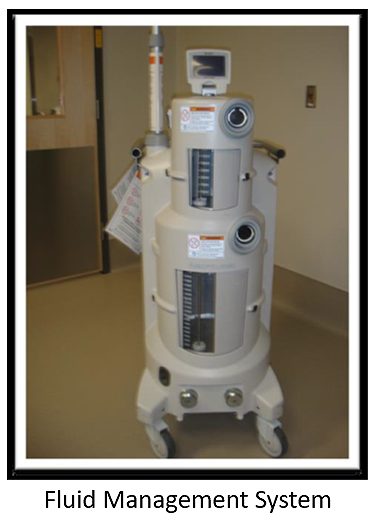 Another pollution prevention project involves the introduction of Stryker Neptune fluid management systems in the facility’s operating room and endoscopy departments. Three docking stations ($12,537 each) were installed and 12 dolly units ($16,000 each) were put into use. Previously, biohazardous surgical fluid had to be captured in disposable suction canisters, solidified, and then disposed of as Regulated Medical Waste (RMW).  During FY 2017, over 6,000 surgical cases occurred and the ICVAHCS saved over $24,000 by avoiding 6.7 tons of RMW and the purchase of 6,000 disposable suction canisters.

An additional pollution prevention project involves the installation of several new, metered and filtered, water-bottle filling stations. With a total of four filling stations, these units dispensed 10,086 20-ounce, bottle-equivalents of filtered tap water during FY 2017, which represents a major reduction in the number of single-use plastic water bottles purchased.

The installation of these additional water-bottle filling stations was motivated by local staff member requests, along with local and national VA policies to reduce or eliminate wastes and conserve resources. The ICVAHCS didn’t realize a cost savings associated with this installation, since plastic bottles are recycled at no cost by the facility’s recycling vendor. Instead, the cost savings were realized by the individual users who didn’t have to purchase 10,086 20-ounce bottles of water.

The final pollution prevention effort involves the replacement of 950 D-cell, battery-powered, hand-soap dispensers with mechanical units. The estimated annual waste reduction is 1,500 pounds of used D-cell batteries, classified as universal waste, and an estimated annual cost savings of $5,000. The replacement of battery-powered, hand-soap dispensers with mechanical units was primarily motivated by the desire to eliminate the purchase and disposal of thousands of D-cell batteries each year, which aligns with local and national VA polices.