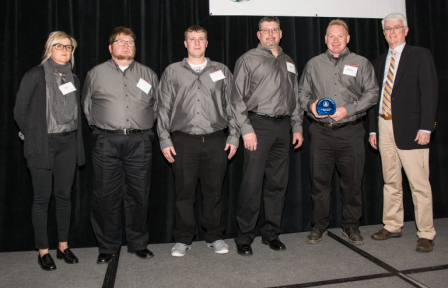 Awardees with EPA Region 7 Administrator Jim Gulliford (click to enlarge)JBS Swift Foods in Ottumwa processes, prepares, packages and delivers fresh, further-processed and value-added pork products for domestic and export sales. It also further processes pork bellies into bacon. This facility aggressively looks for ways to save water and has a water conservation team consisting of representatives from all areas within the facility. The team meets biweekly to share ideas with the group for potential water saving projects and to help shed light on usage trends in the facility. In addition, plant leadership makes a point of sharing the conservation efforts and successes when they speak with production team members. This helps drive empowerment throughout the entire organization on this subject.

The key point in making the conservation team effective is to have a definite, measurable goal set by the senior management team. This allows the team to have a shared mission and metrics to clearly demonstrate their effectiveness. Projects are implemented using this goal as the driving factor, rather than making each project implementation driven by payback in water cost alone. Today, the facility looks at a bigger picture, including water cost savings; water treatment savings; decreased hydraulic loading for the wastewater treatment plant; and what is the "right thing" when assigning funding. The team appreciates the fact that capital is limited and strives to achieve the maximum reduction with every project.

An unintended benefit of cutting the facility’s water use is greater efficiency of the existing wastewater treatment plant. By reducing the total gallons treated, the facility is able to improve treatment time and produce better effluent. This not only benefits the surrounding community but also benefits JBS by increasing production to feed more people.

At the plant, water is measured as gallons per head. The plant used 156.54 gallons per head processed in 2015. The facility became more efficient and decreased that volume to 122.29 gallons per head in 2017. This is a reduction of 52.83 million gallons (annualized), a decrease of 13.5 percent (total volume). During this same time, production increased nearly 26 percent, which would not have been possible without the freshwater use reduction.

A very effective, water conservation effort replaced trough water tanks in the live barn with a nipple system. Another example of water elimination use throughout the facility was switching from water-cooled hydraulic packs to air-cooled ones. Both initiatives conserved thousands of gallons of water per day. Facility culture is changing for the better by encouraging water reuse ideas. The facility uses water for cooling in several applications and as the culture evolves, more water reuse possibilities emerge.

Other JBS facilities are starting to adopt the conservation efforts undertaken at JBS Swift Foods in Ottumwa. The key drivers enabling the success of this program are establishing measurable goals and developing a cross-functional team to enact measures. Setting deadlines for projects, tracking bids, and project completions are also important. The team works diligently to ensure these deadlines are met. Building a team with the appropriate knowledge, goals, determination and support should bring success in any type of facility.