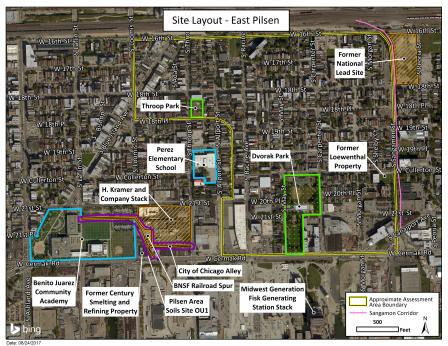 EPA concluded the cleanup of lead-contaminated soil in 15 residential properties in the East Pilsen Area Soils Site(PDF) (1 pp, 250K, About PDF) in July 2018. Three homes previously sampled by EPA and shown to be above the lead in soil action level (400 parts per million) were not remediated because their owners declined to grant access to EPA.

In general, cleanup consisted of excavating contaminated soil in the yards and gardens of homes in surface soil greater than 400 parts per million parts of lead. Parts per million is abbreviated “ppm.” Engineering controls such as dust suppression and monitoring were set to protect workers and residents. The soil was disposed of at a permitted disposal facility.  Yards were backfilled with clean soil , sod, gravel, and/or mulch and restored per the owners’ approval.

During the cleanup, EPA worked closely with the owners, residents, and Alderman’s office and neighborhood organizations and continues to provide information to residents about steps they can take to reduce exposure to lead contamination in Pilsen Area soils.

The site consists of about 145 acres, and is located in the eastern portion of the Pilsen neighborhood in Chicago. It is to the north and east of Operable Unit 2 (OU2) of the Pilsen Area Soils site. It is bounded by West 16th Street to the north, South Sangamon Street and the Sangamon Corridor to the east, West Cermak Road and West 18th Place to the south, and South Allport Street and South Loomis Street to the west.

U.S. EPA conducted several studies from 2013 to 2016 to determine the potential industrial sources – such as former foundry and smelting operations – for the East Pilsen Area Soils site contamination. This study confirmed that the source of lead was industrial, but no clear connection between the potential source material and the residential samples was found.

In summary, the site contains residential properties with elevated levels of lead in surface soils. Because of that, there exists a potential for exposure of humans to lead, a hazardous substance. Lead exposure by inhalation and ingestion can have detrimental effects on almost every organ and system in the human body. Off-site movement of the lead would greatly increase the potential exposure to nearby people, animals and the food chain.  The cleanup is expected to cost close to 1 million dollars.