This project has been completed.

U.S. EPA removed, transported, and disposed of asbestos-contaminated waste inside and outside of every building.  The site has been turned over to Illinois EPA.

The cleanup, which lasted about nine months, involved removing waste materials after being separated into the following categories:

The majority of the asbestos waste was loaded into lined trucks or dumpsters/roll-off containers. Any debris that was too large for transport was mechanically demolished prior to load and transport. Depending on the location, some waste (i.e., drummed and universal waste streams) was temporarily stockpiled inside an “outbuilding” prior to transport and disposal. Nearly 2,200 tons of contaminated debris, 1,160 cubic yards of contaminated pipe wrap and boiler insulation, nine 275-gallon totes of waste/fuel oil, three 55-gallon gallon drums of waste anti-freeze, 3,700 fluorescent light bulbs, and 12 pounds of mercury were removed and shipped off-site.

During the cleanup, U.S. EPA also took measures to keep any asbestos-contaminated dust from blowing off-site. The air was monitored to ensure the asbestos was under control. Security was provided around the clock to prevent trespassing.

The Pillsbury Mills LLC removal site is located at 1525 E. Phillips St., Springfield, IL.  The site is a former food processing facility on about 18 acres of land.  At one point, it consisted of 26 structures including warehouses, office buildings, grain-mixing buildings, and grain storage silos. It is located in a residential and light industrial area next to rail lines. Vacant for about 10 years, Pillsbury Mills is surrounded by a fence, however, there is evidence of trespassing. 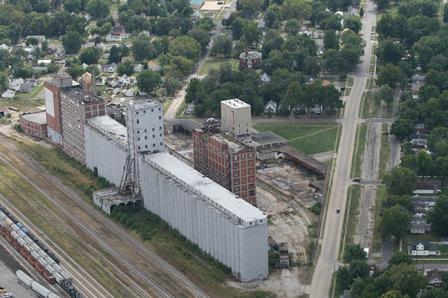 The Pillsbury Mills facility as it looks today.

Illinois EPA referred Pillsbury Mills to U.S. EPA for an assessment and possible cleanup in March 2016. Prior to that, Illinois EPA referred the matter to the Illinois Attorney General’s Office. That office filed a complaint against the owner and others for asbestos-related violations. The owner/operator was required to secure the site and hire an asbestos professional to design a cleanup plan. Although steps were taken, including the removal of a small amount of asbestos-containing material outside the fence line, an acceptable cleanup plan was never submitted and a cleanup was never started.

Meanwhile, Illinois EPA and the city of Springfield continue to monitor the site for improper activities and are trying to compel the owner to provide better security.

Images of cleanup progress for the site.