EPA concluded its removal activities to clean up lead-contaminated soil in Operable Unit (OU) 2(PDF)(1pp, 1.5MB, About PDF) of the Pilsen Area Soils site in 2018. Overall, EPA checked 95 residential properties within the site:

The OU2 cleanup work began in December 2016 with contractors from H. Kramer & Co. excavating, removing and disposing lead-contaminated soil from residential yards in the target area. Excavated areas were backfilled with clean soil, mulch, sod, or gravel depending on the homeowner’s preference.

EPA had concluded the cleanup of lead-contaminated soil in OU1 of the site in the summer of 2016. Operable Unit 1 (OU1) (1 pp, 58 K, About PDF): OU1 consists of an east-west alley between West 21st Street and West Cermak Road and between South Loomis and South Throop Streets. It also included a railway spur that begins on South Laflin Street just north of the Benito Juarez Community Academy athletic field and ending on West Cermak Road just east of South Loomis Street. The contaminated soil was excavated, treated and disposed offsite at a permitted landfill. Solid waste, vegetation, most rail ties and rail were also removed. All areas were graded with gravel cover with an underlying geotextile fabric prior to being paved with asphalt, except for Area 1 west where a final gravel cover was completed.

EPA continues to work closely with the City of Chicago and neighborhood organizations to provide information to residents about steps they can take to reduce exposure to lead contamination in Pilsen Area soils.

OU 2 consists of an area of residential properties in Chicago’s Pilsen neighborhood where surface soil contaminated with lead may be attributed to H. Kramer & Co. – a brass and bronze foundry located at 1345 West 21st Street in Chicago – through air deposition from the facility’s emissions. The area is in the predominant downwind location of H. Kramer. After coordinating with property owners who provided access to their properties, H. Kramer & Co. contractors conducted the cleanup.

OU2 cleanup consisted of excavating contaminated dirt in the yards and gardens of homes with lead in surface soil greater than 400 parts lead per million parts soil. Engineering controls such as dust suppression and monitoring were set to protect workers and residents. The soil was disposed of at a permitted disposal facility. Yards were filled in with clean material and restored to their original condition as much as possible.

Responsible Parties performed the cleanup at OU1 from November 2015 to July 2016 with EPA oversight. The goal of the cleanup was to remove the threat of lead exposure to surrounding residents and workers from surface soil through removal of soil contaminated with highlevels of lead and the placement of permanent covers over the site.

Operable Unit 1 (OU1): OU1 consists of an east-west alley between West 21st Street and West Cermak Road and between South Loomis and South Throop Streets. It also includes a railway spur that begins on South Laflin Street just north of the Benito Juarez Community Academy athletic field and ending on West Cermak Road just east of South Loomis Street. (See map of Areas 1 through 10 representing segments along the spur and alley.) Areas 1 and 2 stretch east-west just north of the school’s athletic field. Those two areas have separate work plans for areas owned by BNSF and the city of Chicago.

Operable Unit 2 (OU2) (1 p, 1.49MB, About PDF): OU2 is a residential area bounded by West 18th Place to the north, a north-south alley between South Allport Street and South Racine Avenue to the east, West 21st Street to the south, and South Loomis Street to the west. There are about 178 residential properties in this 25-acre OU2 site. About 116 of the properties have non-permanent covers in their yards such as bare soil, grass or gravel and are the focus of EPA actions. 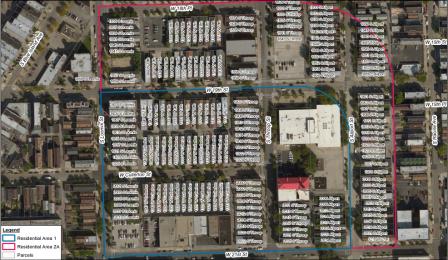 U.S. EPA has been investigating lead contamination in Chicago’s Pilsen neighborhood since 2011 in response to residents’ concerns about the area’s long industrial history.  The Agency conducted soil sampling in 2012 and 2013 and found high levels of soil lead collected from two residential areas, as well as from the alley and along the Burlington Northern Santa Fe (BNSF)-operated railroad spur between West 21st Street and West Cermak Road near the H. Kramer facility.