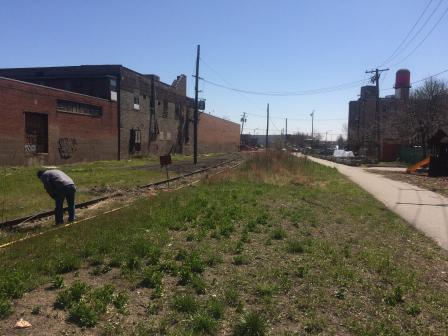 View of the Sangamon right-of-way between Cullerton and 21st Streets before the summer 2016 removal action. View photo gallery.Contractors for the Burlington Northern Santa Fe Railway Company concluded the cleanup of lead-contaminated soil on the Sangamon Street Right of Way site in 2018. In December 2017 they excavated the northern portion of the site located between 16th and 18th Streets and placed orange “Do not dig” demarcation fabric at a depth of 2 feet. They then backfilled the excavated area over the barrier with 18 inches of stone throughout most of the area. They also repaired the fencing around the site. In June 2018, the contractors completed the work by grading stone over the area, placing 6 inches of topsoil and seeding.

The Sangamon Street Right of Way site is in Chicago’s Pilsen neighborhood and runs from 16th Street south to 21st Street along Sangamon Street. It had been an unused BNSF railroad right-of-way for many years. BNSF completed soil sampling in 2013 and 2014 to evaluate lead contamination along the stretch. Based on the results of the soil samples, 33 soil boring locations on the right of way had total lead concentrations above the Removal Management Levels for industrial and residential values. Six sample locations were above the Toxicity Characteristic Leaching Procedure for lead of 5 mg/l. Consequently, this material had to be managed as a hazardous waste.

In September 2015 EPA signed an action memorandum documenting the site conditions and began negotiations to sign a consent order with BNSF to complete the cleanup of lead-contaminated soil.

EPA and BNSF have been coordinating with the City of Chicago, which is in the planning stages to construct the “El Paseo Project,” a green trail and open space on the Sangamon Right of Way. EPA continues to work closely with the City of Chicago and neighborhood organizations to provide information to residents about steps they can take to reduce exposure to lead contamination in Pilsen Area soils.

As part of its investigation and cleanup of the Loewenthal Metals Corp. site, EPA requested access to the adjacent (to the east) Sangamon Street Right of Way, to find out the extent of contamination. In response, a BNSF contractor collected the necessary soil samples in June 2013 with EPA oversight at several sampling locations chosen by EPA. Some samples were split for EPA to analyze separately. Based on the results of this initial sampling, BNSF completed additional soil sampling in November 2013 and again in October 2014 to further evaluate lead levels along the entire right of way running from 16th Street south to 21st Street. These sampling locations are shown on the Sangamon Right-of-Way: Sampling Map (PDF) (1 pp, 2.2MB).

The high levels of lead that were documented met the criteria for a Superfund Removal Action, and EPA signed an action memorandum (PDF)(22 pp, 4 MB ) to authorize a cleanup in September 2015. Shortly after, the Agency and BNSF began negotiations to work out a consent order for BNSF to conduct cleanup of the contaminated soil. In March 2016, EPA and BNSF signed an Administrative Settlement Agreement and Order on Consent for Removal Action (PDF)(51pp, 2 MB) for BNSF to perform the work only in the portion of the site between 18th Street and 21st Street. (The northern portion of the Sangamon Right of Way site between 16th and 18th street was addressed separately.) The Removal Action Work Plan (PDF) (30 pp, 6.6 MB) which was prepared by BNSF's contractor was attached to the consent order.

A community informational open house was held adjacent to the site in June 2016 at the Casa Maravilla housing complex.  Approximately 30 residents attended the open house. In addition, English and Spanish fact sheets were distributed within a half-mile radius of the site as part of the Agency’s community involvement efforts. That same month BNSF contractors mobilized to the site to start the cleanup work.

In August 2016, BNSF contractors completed the removal action along the right of way between 18th Street and 21st Street with U.S. EPA oversight. The lead-contaminated soil was excavated to a depth of two feet and transported to Waste Management Laraway Landfill in Joliet, Illinois. Over 100 tons of steel rail were removed and sent out for recycling. The excavated areas were backfilled with 18 inches of stone and 6 inches of topsoil which was hydro seeded. The site was fenced off and air monitoring was conducted throughout the entire removal. Dust suppression was set up using water from a tank or hydrant and a fog spray to keep the material moist and the dust levels below action levels.

The right of way between 16th and 18th Streets was assessed and addressed separately from the southern portion of the site. This northern part of the site is adjacent to the National Lead Site – on the north side of 18th Street – which has been in the Illinois EPA voluntary remediation program. In November 2017 the Agency and BNSF signed an Administrative Settlement Agreement and Order on Consent for Removal Action (PDF)(51pp, 2 MB) for BNSF to perform work on the 16th to 18th Street portion of the site. The cleanup work began in December 2017 and concluded in the summer of 2018. The work involved:

No action level exceedances were observed by the contractor during air monitoring.

EPA continues to work with BNSF and the City of Chicago to place institutional controls on the right of way. The City will place a permit hold on any work conducted. When a permit is applied for to conduct work in the area, the City will be notified and contractors will be informed to properly manage any soil in the area where work is to be completed. Appropriate safety measures would also have to be instituted if a contractor digs below the 2-foot barrier marking that was placed at the bottom of the excavation. The controls will be tied to the Property Identification Number (PIN) number.

For a list of documents relating to this site, visit the Sangamon Street Right-of-Way Special Collection