Whiting Metals is a metals reclamation facility located at 2230 Indianapolis Boulevard in Hammond.  From 1937 to 1983, the Federated Metals Corporation conducted metal smelting and refining operations at the facility.  EPA is addressing hazardous waste released from the facility in ongoing cleanup actions.

In August 2018, IDEM installed a lead ambient air monitor adjacent to Whiting Metals and began sampling.  In response to elevated lead concentrations detected by the air monitor, EPA and IDEM inspected the facility in September.  EPA, in coordination with IDEM, then installed a meteorological tower and an additional air monitor that collects hourly metals concentrations.

On November 8, 2018, EPA and IDEM issued notices of violation (NOVs) to Whiting Metals for excessive lead emissions from the Northwest Indiana facility.  The NAAQS for lead and its compounds are 0.15 micrograms per cubic meter (µg/m3), averaged over a three-month period.  The three-month average lead concentration at the monitor reached 0.31 μg/m3 for the period of August through October 2018.

The NOVs provide Whiting Metals with an opportunity to confer with EPA and IDEM, respectively, regarding these allegations as the agencies evaluate potential enforcement options under the Clean Air Act and state authorities.  EPA, IDEM and Whiting Metals met on December 3, 2018 to discuss the NOVs and monitoring data.  Whiting Metals committed to working cooperatively with EPA and IDEM to resolve the alleged violations.

Lead can adversely affect the nervous system, kidney function, immune system, reproductive and developmental systems and the cardiovascular system.  Infants and young children are especially sensitive to lead, which may contribute to behavioral problems and learning deficits.

In late October 2018, EPA and IDEM began receiving information about metals other than lead detected by the monitors near the Whiting Metals facility.  These other metals include cadmium, arsenic and manganese.  EPA compared their concentrations to current health benchmarks and determined that, of all the metals measured, cadmium concentrations were elevated on certain days (i.e., they were above the Agency for Toxic Substances and Disease Registry’s (ATSDR’s) acute inhalation Minimal Risk Level (MRL) for cadmium).  As with the lead data, EPA uses wind direction and hours of operation information to assess the source of the cadmium emissions measured by the monitors.

Both IDEM’s and EPA’s monitors measure cadmium as total suspended particulate (TSP), because that is the standard for comparison to the lead NAAQS.  TSP is made up of both respirable particles (small particles that can pass deep into the lung) and non-respirable particles (larger particles intercepted in upper airways, so that they do not pass deep into the lungs).  The MRL for cadmium, on the other hand, is based on the respirable fraction of cadmium-containing particulates (less than 1.5 microns in aerodynamic diameter).  Because EPA does not at this time know what percentage of the cadmium is respirable versus non-respirable, a direct comparison of the measured cadmium concentrations (in TSP) to the ATSDR’s MRL should be done with caution.

To date, EPA has validated cadmium data from August 3, 2018 to Sept. 30, 2019.  EPA’s analysis of currently available data indicates that cadmium levels were above the acute inhalation MRL of 30 nanograms per cubic meter (ng/m3) on nine days during this timeframe.  EPA has concluded its additional ambient air monitoring at this location.

It is worth noting that MRLs are intended to serve as a screening tool to help public health professionals decide where to look at a pollutant more closely.  To be protective and conservative, ATSDR sets MRLs below levels that, based on current information, may cause adverse health effects.  Exposure to a level above the MRL does not mean that adverse health effects will occur.  Rather, it indicates the need to investigate the situation more closely.

IDEM will continue to collect and evaluate data from the air monitors to determine what actions are needed to protect public health.  Actions the company could take to reduce lead emissions may also reduce cadmium emissions.  Information about MRLs

In May and June 2019, EPA collected surface soil samples on Village Discount Outlet, Inc. and Whiting Metals LLC properties, located at 2200 and 2230 Indianapolis Boulevard, respectively. Elevated lead concentrations were detected in the soil along the north side of the two properties, as shown in the Soil Sampling Map. The samples were analyzed for total metals by inductively coupled plasma atomic emission spectroscopy (ICP-AES) at the US EPA Region 5 Chicago Regional Laboratory. The sample locations identified in the Soil Sampling Map are based on GPS coordinates and field data from the date of sample collection. 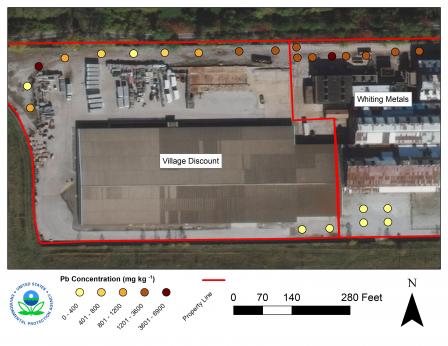 Information on Lead and Cadmium