Conventional septic systems are often not designed to remove nitrogen to levels that are protective of local water quality, which can lead to problems like excess nitrogen loading to waterways. This issue is especially important to coastal communities, where excess nitrogen can cause eutrophication, hypoxia, and toxic algal blooms leading to beach closures and other issues that negatively affect coastal communities. EPA estimates that over 2.6 million existing systems could be good candidates for upgrade to advanced septic systems that treat the nitrogen due to their location in nitrogen-sensitive watersheds. Adding nitrogen sensors to these advanced septic systems will help manufacturers, homeowners, local and state governments know that these systems are performing as intended and protecting valuable coastal resources.

The Challenge - Phase I

In January 2017, EPA partnered with The Nature Conservancy, USGS and others to launch Phase I of the Advanced Septic System Nitrogen Sensor Challenge. Phase I challenged entrants to design a nitrogen sensor for use in advanced nitrogen-removing onsite wastewater treatment systems, also known as advanced septic systems, to monitor their long-term performance. Phase I was open through mid-March 2017, and written proposals were judged by an external panel of experts. EPA hosted a Sensor Showcase Day on June 29, 2017 and awarded prizes.

Phase I of the Advanced Septic System Nitrogen Sensor ChallengeEXIT

EPA launched prototype testing in December 2017. Prototype testing was open to any sensor technology developer with a nitrogen sensor for advanced septic systems. EPA selected Battelle Memorial Institute to support the Prototype Testing Program by developing a Test/Quality Assurance Plan (T/QAP) and Verification Plan and overseeing the testing of the sensors. The T/QAP is based on the International Organization for Standardization (ISO)  Environmental Technology Verification (ETV) Standard - ISO 14034. Funding for the testing program is from EPA's Office of Research and Development and EPA's Office of Water and the Office of Wastewater Management.

Sensor testing was  conducted at the Massachusetts Alternative Septic System Test Center, a National Sanitation Foundation certified test facility in Barnstable, Massachusetts, from 2018 through 2019. The last Challenge test occurred between  August 21-27, 2019, for which EPA offered up to $50,000 in prize money to the best performing sensor during the August test. 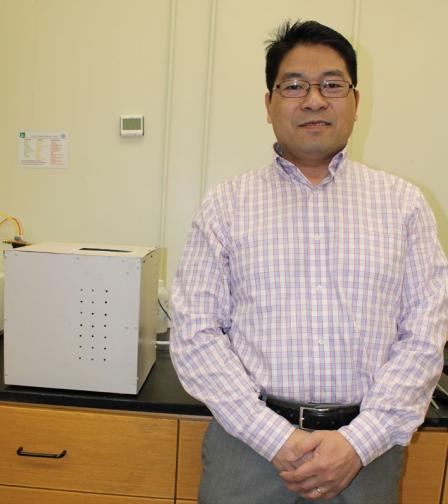 On May 5, 2020, EPA  announced that Dr. Qingzhi Zhu, with Stony Brook University and the New York State Center for Clean Water Technology in Stony Brook, N.Y., earned the Challenge’s prize of $50,000, the opportunity for commercialization support, and eligibility for the six-month ISO ETV 14034 field verification test, which is  scheduled to start in the Fall of 2020.  If the sensor package successfully completes the ISO ETV 14034 field test and meets the minimum performance goals listed in the table below then a verification report and statement will be posted on the VerifiGlobal web site in the Summer of 2021.

1 Refer to Section B1.4 for information on the sources of nitrate (NO3-), ammonia (NH4+), and total organic carbon (TOC).

2 Total Nitrogen (TN) is defined as the sum of total kjeldahl nitrogen (ammonia, organic and reduced nitrogen) and nitrate-nitrite.

3 True value is defined as the certified laboratory result for the parameter using approved test methods.

4 The sensors must be capable of alerting about or otherwise notifying of an over range value.

5 Frequency of sensor readings during the preliminary and 6-month testing are detailed in Section B1.2. For deployment in an actual application, sensor frequency readings will depend on end user needs and may vary from hourly to daily or more frequently than hourly. Sensors should have the flexibility for varying frequency of readings.

Following the release of the verification report and statement in the Summer of 2021, an external technical panel and The Nature Conservancy (TNC) will review the results. TNC and others are seeking funding for an order of 200 deployable septic sensor units, not to exceed a total cost of $300,000. The order would be presented in the Fall of 2021 to the best performing sensor that completes the 6-month field performance test and meets or exceeds the performance goals.