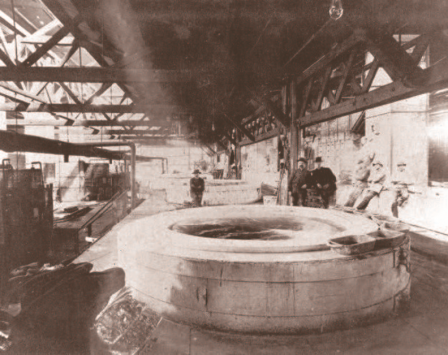 Operations at the Argentine Smelter in 1899. (Photo credit: My Present Past)Revitalizing communities is at the heart of environmental cleanup and site restoration. Taking abandoned, contaminated sites and returning them to productive reuse transforms these sites from eyesores and potentially dangerous areas into community assets.

The Kansas City Structural Steel Site in Kansas City, Kansas, exemplifies how environmental cleanup, community partnership, and a vision for the future can transform a site from a liability into a source of community pride.

Cleaning Up Nearly 100 Years of Contaminants

Beginning in the late 1880s and continuing through the 1970s, the site was used for industrial purposes resulting in soil and groundwater contamination by heavy metals. In the 1990s, EPA began a cleanup of the site.

The site after cleanup and before redevelopment. (Photo credit: EPA Region 7)As part of this cleanup, vacant and abandoned structures were demolished, while on-site contamination was consolidated under a soil protective cap. To protect the waste consolidated under the soil cap, EPA instituted land use restrictions to prevent any disturbance of soil on-site.

With the cleanup of the site complete, EPA and local stakeholder attention turned to the site’s future and how best to repurpose the site into a community asset. El Centro, a local nonprofit organization, worked with EPA to acquire the property and identify potential reuse scenarios. As part of the process, El Centro worked to identify appropriate uses for the property and how the Argentine communityExitof Kansas City, Kansas, wanted to see the site used.

Finding the Right Redevelopment for the Community 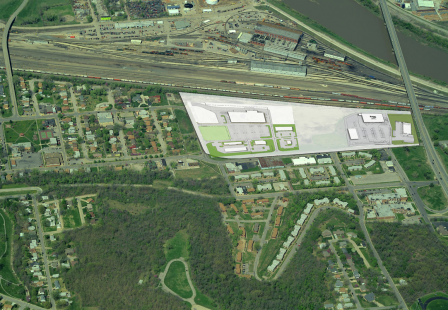 “This site’s new future is taking shape because EPA partnered with local governments, innovative businesses, and the state of Kansas to use flexible cleanup laws for the Argentine community,” former EPA Region 7 Administrator Karl Brooks said in 2014. “La Plaza Argentine shows EPA’s Brownfields Program helping solve the challenge of offering choices for affordable healthy food in our cities, while creating jobs for the proud folks who call Argentine home.” 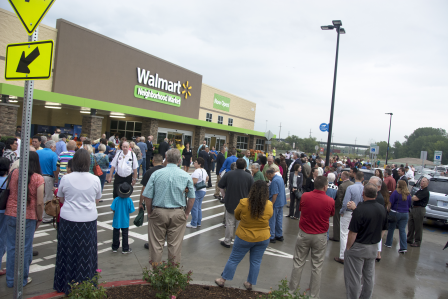 Community members attend the Walmart Neighborhood Market grand opening on-site in September 2014. (Photo credit: EPA Region 7)In September 2014, the Walmart Neighborhood Market opened to much fanfare in the Argentine neighborhood. A large community event and celebration marked the restoration of the site as a community asset. EPA recognized Walmart and the Argentine Neighborhood Development Association with Leading Environmentalism and Forwarding Sustainability (L.E.A.F.S.) awards for their roles in the reuse efforts at the site.

The new development contains 61,000 square feet of commercial opportunity, and in 2017, the Unified Government of Wyandotte County and Kansas City, KansasExitopened a 6,000-square-foot South Patrol police station in the area.

“The real test for projects like this one is whether residents feel like, when it’s done, their neighborhood is a better place to live than it was before. This project meets that test in every way,” said Ann Murguia, who served as the Argentine Neighborhood Development Association executive director until 2018. 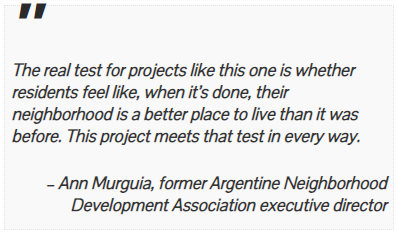 Redeveloping the Kansas City Structural Steel Site has served as a catalyst for the Argentine neighborhood, and showcases how EPA’s cleanup programs can work in partnership with local governments and communities to restore once-contaminated sites and transform them into community assets.