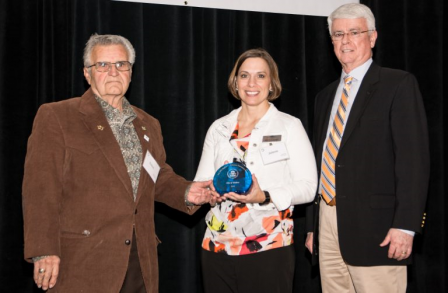 Awardees with EPA Region 7 Administrator Jim Gulliford (click to enlarge)Eudora, Kansas, is located approximately 10 minutes east of Lawrence, Kansas, and 15 minutes west of the Kansas City metropolitan area. The city of Eudora operates as a commission-manager form of government. The city commission is made up of five Eudora residents who are elected at large by the city’s residents. The governing body is responsible for passing resolutions and ordinances, establishing city policies, and approving the annual budget. The city owns and operates its own water, sewer, and electric (distribution only) utility systems. The city also operates both the police and fire departments.

Eudora adopted an ordinance in 2004, which implemented the Municipal Water Conservation Plan. The city conducted a detailed water meter audit in 2015, which found, in part, the existing water meters were only 91 percent accurate, on average, leading to unidentified water losses throughout the system. In 2016, Eudora worked with an engineering company to replace its 2,345 water meters with new water meters, certified to 100-percent accuracy.

The installation of more accurate water meters allowed the city to more quickly respond to identified water leaks, reducing consumption of a precious natural resource, while preventing citizens from paying for water they are not consuming. The more accurate meters also increase revenue for the water department, allowing Eudora to better manage its water operations. Shown by calculations from the energy service company ESCO in September 2017, the city also recovered an additional 9,499 kilogallons of water based on the more accurate meters, bringing an additional $85,600 into the water program for more efficient water management.

Moving forward, the city submitted a 2018 update of the 2004 Municipal Water Conservation Plan to the mayor and city commission. The installation of water meters was a vital step in both the 2004 and 2018 action items. 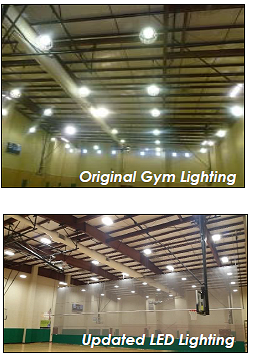 By switching its existing fluorescent and metal halide lighting to LED, the city realized several unintended benefits. LED lighting lasts considerably longer than existing lighting sources, so maintenance costs are reduced. Safety concerns for maintenance personnel using bucket lifts to change lights are also reduced. Another important, unintended benefit of LED retrofits is the reduction of mercury as a component of fluorescent and metal halide lights, as well as from emissions from burning coal to generate electricity.

The city of Eudora entered into this initiative through the Kansas Corporation Commission Facility Conservation Improvement Program (KCC FCIP). This program allows government entities to enter into energy performance contracts to implement energy efficiency projects without up-front capital costs. The project is paid for through energy savings guaranteed by ESCO, who conducts an investment grade audit to identify potential energy conservation measures, which are then implemented through an energy performance contract. Through this process, the city was able to increase its lighting levels and provide better safety for its citizens at lower operating costs.

In addition to the lighting project, the city also installed web-based thermostats to more effectively manage its heating and cooling (completed May 2016). These thermostats allowed the city to better manage the comfort of its citizens and city employees, while saving energy at the same time. Web-based thermostats were installed in 20 city offices, saving:
To confirm the effectiveness of its energy projects, the city entered baseline data into Energy Star Portfolio Manager and continues to track its energy progress. Using 2015 as a baseline, Portfolio Manager showed a decrease in site energy use intensity (EUI – measured in kBtu/ft2) in all six city buildings involved in the energy efficiency projects:

According to Energy Star Portfolio Manager, the reduction in energy consumption from these six buildings also resulted in a 12-percent reduction in greenhouse gases, from a total of 189 kg carbon dioxide equivalent (CO2e)/ft2 to 167 kg CO2e/ft2. The energy projects resulted in a total savings of 486,500 kWh of electricity; 2,792 therms of natural gas, and $29,185.

The city of Eudora used a very common mechanism to achieve these energy and water savings. Any state, city or local government located in Kansas can use the KCC FCIP to implement energy efficiency projects. Energy performance contracts, exclusive of the FCIP mechanism, can be used by any entity to achieve its energy efficiency goals. The lighting, web-based thermostats, and water meter projects are common to municipalities and could be implemented by any municipality looking to reduce its operating expenses and environmental footprint.