The EPA-sponsored Caminada Headland Back Barrier Marsh Creation (BA-171) project is currently under construction. Working with the Louisiana Coastal Protection and Restoration Authority Exit(CPRA), we will construct approximately 900 acres of coastal habitat in southeast Louisiana. Construction began in June 2020 and is scheduled for completion late Summer 2021.

This project not only constructs vital coastal wetlands but works synergistically with the State of Louisiana’s recently constructed Caminada beach and dune project. These restoration projects protect the local community, including nearby Port Fourchon and Highway 1. Port Fourchon is a hub of oil shipping in the northern Gulf of Mexico, and Highway 1 is the only hurricane evacuation route for Grand Isle and other local Louisiana communities.

The Caminada Headland Back Barrier Marsh Creation project is located south of Louisiana Highway 1 between Belle Pass and Caminada Pass and stretches from the area in and around Bay Champagne to the west of Elmer’s Island along the headland. It is along the Louisiana coastline in Lafourche and Jefferson Parishes.

The project area is defined by Highway 1 to the north, Belle Pass to the west, Caminada Pass and Elmer’s Island to the east, and Caminada Headland to the south. 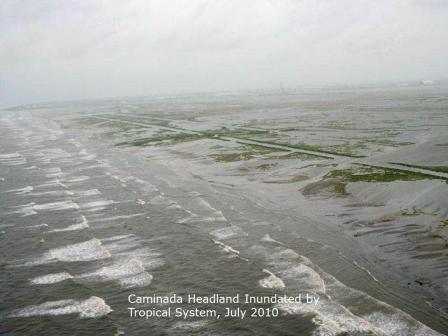 Wetland loss is due largely to storm impacts causing breaching along the headland. As the beach and dune continue to migrate landward, overwashed sediments are lost into newly formed open water areas and land loss rates are exacerbated.

Storm overtopping and breaching, saltwater intrusion, wind and wave induced erosion, sea level rise, and subsidence at Caminada are causing some of the highest shoreline retreat rates in Louisiana. 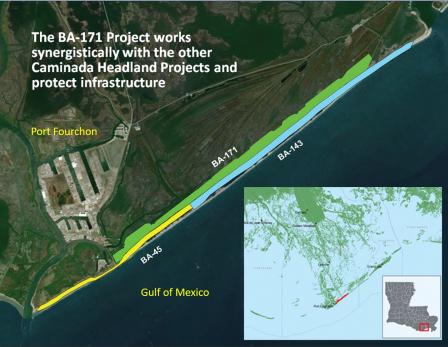 Restoration of the Caminada Headland is occurring incrementally and through synergistic, collaborative efforts.

CPRA engineers use topographic and bathymetric surveys and field information to analyze the existing project area.  A suitable borrow area for fill materials is identified by taking Gulf of Mexico sediment samples and analyzing them for their physical characteristics. Soil samples are also taken from within the project fill area to estimate the required fill quantities and to design temporary earthen containment dikes to contain the sediment slurry dredged from the Gulf of Mexico.  These projects would not be possible without the cooperation of private landowners. 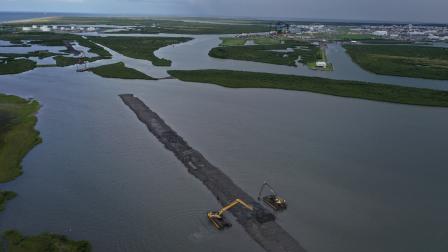 Heavy equipment referred to as marsh buggies builds up earthen containment dikes prior to dredging. A large hydraulic cutterhead dredge is towed to the Gulf of Mexico borrow site.  Pipes are laid from the dredge onto the shoreline and into the project location.

The dredge excavates material from the bottom of the Gulf of Mexico and pumps it into the project fill area confined by the containment dikes. The excess water is decanted leaving behind sediments and creating marsh.  Barrier island vegetation is strategically planted to retain sediments as needed and foster natural colonization.

Construction of the earthen containment dikes began in June 2020. Dredging is expected to begin in April 2021 and the project is scheduled for completion late Summer 2021.

The project also protects the local community against storm surge and flooding, including nearby Port Fourchon which supplies nearly 20 percent of the nation’s oil and gas.  There are many pipelines and oil and gas infrastructure in the project area including the Louisiana Offshore Oil Platform (LOOP). The LOOP is an essential energy transport hub, receiving and storing crude oil for delivery to the nation’s refineries.  Coastal wetlands are the first line of defense against storm surge and a key factor in making communities and vital infrastructure more resilient to storms.  The Caminada Headland protects Highway 1, which provides critical access to the nation's energy, fisheries, and tourism sectors.

EPA is proud to be the CWPPRA federal sponsor of the Caminada Headland Back Barrier Marsh Creation project.  We would like to thank our project partners including CPRA, Edward Wisner Donation Trust of New Orleans, Louisiana, and the Caillouet Land Corporation.

Learn more about CWPPRAExit.  Learn about other EPA-Sponsored CWPPRA Projects.