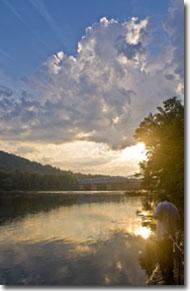 Healthier lakes, streams and fish
Mercury and other power plant emissions damage our environment.  These compounds pollute our nation’s lakes and streams poisoning fish and the people and animals that rely on them for food.   Other power plant emissions such as sulfur dioxide (SO2) can react in the atmosphere to form a haze of fine particle pollution and smog that reduces visibility in our nation’s scenic vistas and treasured national parks, and damages sensitive natural ecosystems. The final Mercury and Air Toxics Standards (MATS) will significantly reduce power plant mercury emissions.  The equipment used to comply with MATS will also reduce emissions of SO2 and directly emitted fine particle pollution.

Emissions of SO2 from power plants can react in the environment to form weak acids that fall to earth as rain, fog, snow, or dry particles.  They can cause lakes and streams to become acidic and unsuitable for many fish, damage forests, and cause deterioration of cars, buildings, and historical monuments.   Sulfur deposition may also increase the rate of mercury methylation and the impact of mercury poisoning on fish and wildlife.

Less mercury contamination
Once mercury from the air reaches water, microorganisms can change it into methylmercury, a highly toxic form that builds up in fish.    As larger fish eat many smaller fish, mercury concentrations increase in their body tissues.  Mercury contamination affects populations of numerous fish species trout, bass, salmon and others.  Waterfowl and mammals that eat fish, including loons and otters, and songbirds, bats, and amphibians that feed on insects can be exposed to high levels of mercury.  Birds and animals suffering from mercury exposure behave differently and have less reproductive success.  Over time, MATS will help reduce the levels of mercury in fish.

Improved visibility
Power plant emissions of SO2 also can form fine particle pollution that reduces visibility throughout the United States.  These suspended particles and gases degrade visibility by scattering and absorbing light. We value visibility where we live and work, and where we travel  especially at sites such as the Great Smoky Mountains National Park.