Continuous monitoring station in the Lawrence section of the river 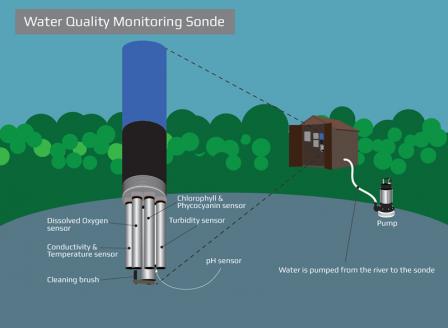 Water monitor in the Lawrence section of the Lower Merrimack River

Water monitor in the Lawrence section of the Lower Merrimack River

Every 15 minutes, from December 2016 through November 2018, this monitoring station took measurements for temperature, dissolved oxygen, pH, specific conductance, turbidity, chlorophyll, and phycocyanin. The data was transmitted in real-time using telemetry for remote access. The data from this station is used to assess water quality conditions.

Data from the monitoring station are presented below.

Learn more about the structure of the monitoring station.

The data presented on this website is considered preliminary data and may be subject to future revision or qualifiers. The data for this site was transmitted directly from the instrument with no or little review. Inaccuracies may be presented due to instrument malfunction or physical changes at the monitoring site. Prior to water quality measurements, the water flows through a pump and a course filter which may slightly alter the measurements.

Click on each of the eight types of measurements above to display that measurement. Click again to hide.

Data View #2 - View the live data in another graph that allows you to compare parameters to their associated water quality standards.

Water temperature is measured in degrees Celsius (°C) which can be converted to degrees Fahrenheit (°F) by multiplying by 9, dividing by 5, and then adding 32. The Commonwealth of Massachusetts has established protective water quality standards for warm water fisheries in Class B waters. Water is not to exceed 28.3°C (83°F).

Temperature controls many biological and chemical processes that take place in the water. If water gets too warm, it can harm fish and aquatic life, influence undesirable changes in biological communities and increase the likelihood of algal blooms.

Humans can increase the water temperature by:

To determine if water is acidic or basic pH is used. The range of pH goes from 0 - 14 Standard Units (S.U.), with 7 being neutral. A pH of less than 7 indicates acidity, whereas a pH of greater than 7 indicates a basic or alkaline condition. pH is reported in logarithmic units and each whole number represents a 10-fold change in the acidity/basicity of the water. Water with a pH of 5 is ten times more acidic than water having a pH of 6. Since pH can be affected by chemicals in the water, pH is an important indicator of water that is changing chemically.

The Commonwealth of Massachusetts has established protective water quality standards for Class B waters. Class B waters are those that the state has determine should be suitable for fishing and swimming. Those standards indicate pH should be in the range of 6.5 through 8.3 and not more than 0.5 units outside of the natural background range.

Pollution can change the water's pH, which in turn can harm organisms living in the water. Lower pH readings are sometimes seen in fresher waters due to acid precipitation or even naturally-occurring organic acids, which can be found in bogs and some wetlands. High pH readings can occur during algae blooms due to chemical processes associated with photosynthesis.

Dissolved Oxygen (DO) measures how much oxygen is dissolved in the water. This is very important to fish and aquatic life that depend on an adequate supply of DO to live. DO is measured in milligrams per liter (mg/L) or percent saturation (%). Different organisms require different levels of DO. Generally, DO is lower at deeper depth where less mixing occurs with the surface water and where water becomes stratified.

The Commonwealth of Massachusetts has established protective water quality standards for warm water fisheries in Class B waters. The standards indicate that DO levels should not be less than 5 mg/L. When concentrations go below this level, sensitive organisms, such as some fish, may become stressed or die, especially if exposed to these conditions for prolonged periods.

Several factors can affect the concentration of dissolved oxygen:

Turbidity is one of the ways to determine water clarity by measuring of how much suspended material is in the water. Suspended materials can include soil particles (clay, silt, and sand), algae, plankton, microbes, and other substances. Turbidity is measured in Formazin Nephelometric Units (FNUs). Under normal condition, turbidity values are usually less than 10 FNUs at the Lower Merrimack.

Chlorophyll is a green pigment found in plants, algae and cyanobacteria. Chlorophyll is extremely important in the photosynthesis process, which allows plants to absorb energy from light. Chlorophyll is measured using a fluorescence sensor.

Some levels of chlorophyll and algae are healthy and provide the base of the food web. When too many nutrients enter the water, algae and cyanobacteria concentrations can take off and form "blooms." Blooms can be unhealthy for other organisms in the water, people, and pets in contact with the water. Chlorophyll is measured in Raw Fluorescent Units (RFUs).

The phycocyanin measurement is used as a field screening for cyanobacteria and cyanobacteria blooms, also called blue green algae. When blooms are formed, the risk of toxin contamination of surface waters increases. Cyanobacteria, also known as blue-green algae, are of special concern because of their potential impacts on drinking and recreational waters. When a bloom is occurring, people should avoid contact with the water and keep their pets out of the water.