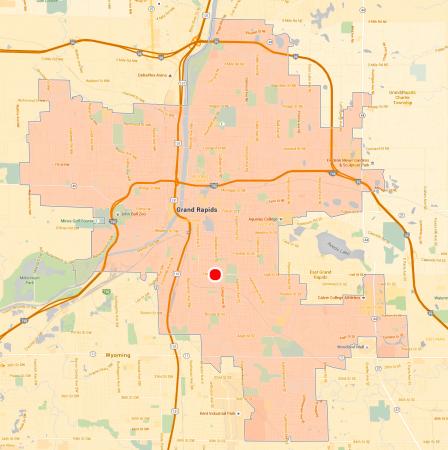 Map of Grand Rapids area with pinpoint location of site.EPA has successfully installed and is operating a technology called a soil vapor extraction and air sparge system, to treat the contamination at the source. We successfully pilot tested this technology in 2017, and are working to have the full system designed and installed by Spring 2019.

On May 19, 2016, the Michigan Department of Health and Human Services requested EPA assistance at the Southeast Grand Rapids Vapor Intrusion Site in Grand Rapids, Michigan. Elevated levels of tetrachloroethylene (PCE) had been detected in the indoor air at four properties, two residential and two commercial. Additionally, an elevated level of trichloroethylene (TCE) was detected at one of the commercial properties. These properties were determined to be unsafe for occupancy by the health department. The vapors caused the evacuation of six residents and workers of two non-profit organizations at two physically connected buildings. EPA installed remediation systems in the buildings, and the buildings are reoccupied. EPA resampled the indoor air periodically for a year after system installation. Levels of target chemicals in the buildings remained below action levels. Michigan Department of Environment, Great Lakes and Energy continues to conduct periodic indoor air sampling to verify that the levels remain safe.

Groundwater contaminated with PCE was found to extend underground, west of the site, to Euclid Ave. SE. Over the summer and fall of 2016, EPA completed an initial indoor air investigation in the target area to find out if residents were in danger of being exposed to the vapors coming off contaminated underground water. Based on the investigation results, EPA installed remediation systems at 7 properties where indoor air exceeded action levels. Follow up indoor air testing shows that the systems are working effectively. EPA conducted another round of air sampling in the neighborhood in January and February of 2017. Winter sampling results showed that no additional properties needed to be remediated. Overall average subslab PCE levels were found to be lower in the winter than during our initial sampling in the summer.