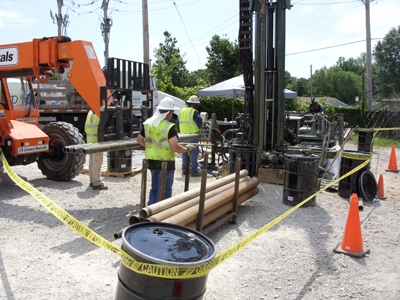 An EPA contractor drills a bedrock monitoring well on the Missouri Metals property.On Jan. 18, 2017, EPA received recent groundwater data from a set of bedrock monitoring wells installed around the Chicago Heights neighborhood. One of these wells, installed in Martin Luther King Park near Dielman Road, showed elevated concentrations of tetrachloroethylene (PCE) and trichloroethylene (TCE) approximately 20-30 feet below the ground surface. Their presence in Martin Luther King Park raises the possibility that these contaminants may also be present in groundwater beneath the neighborhood to the east of the park. Learn more about tetrachloroethylene and trichloroethylene.

In order to ensure that individuals in homes are not exposed to vapors caused by these pollutants, and since these vapors can travel like radon, EPA intends to quickly determine if there are any potential health risks to people living in homes east of the park, attending the St. Luke’s AME Church or the First Baptist Church of Elmwood, or working at the business at 1424 Dielman Road.

EPA is working with PerkinElmer, Inc., current owner of the Missouri Metals facility, and the company that has been conducting the ongoing investigation of the Chicago Heights neighborhood and the Missouri Metals facility, to begin sampling sub-slab vapors and indoor air in these properties, beginning with those that are within 400 feet east of the groundwater well in Martin Luther King park. While this sampling is being done, PerkinElmer will also begin installing additional monitoring wells in the park and in the neighborhood east of Dielman Road.

If the samples show that these contaminants pose an unacceptable human health risk at any of these properties, EPA will require PerkinElmer to install a vapor mitigation system or take other actions at the affected properties to mitigate this risk. Based on these results, EPA may require PerkinElmer to sample additional homes in the neighborhood beyond the initial area of investigation. 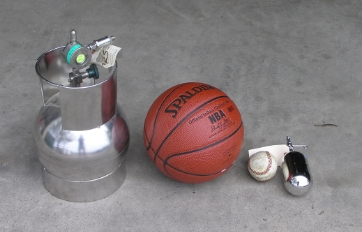 Typical sample containers used for collecting air samples in homes. (Basketball and baseball are for size comparison.)
WHAT YOU CAN EXPECT

Residents may be contacted to obtain access to their properties for sub-slab/indoor air sampling or monitoring well installation.

As stated above, contact will initially occur at homes within 400 feet east of the groundwater well in Martin Luther King Park. Based on these results and future sampling, additional homes may be contacted for sampling. If any results exceed health-based levels of concern, EPA will require PerkinElmer to install mitigation systems in those properties. EPA will keep the community informed as we move forward. For additional information regarding the type of mitigation systems that would be installed, check out EPA's "A Citizen’s Guide to Radon."

At some time before 1988, an unknown quantity of the industrial chemicals PCE and TCE was released at an industrial property located at 9970 Page Avenue, just northwest of the Elmwood Park neighborhood.

This contamination traveled through the soil and into the groundwater. Since then, TCE and other contaminants have been detected in groundwater and vapors in certain locations of the neighborhood, and TCE vapors have been detected at levels of concern in several homes. Vapor mitigation systems have already been installed in most of the homes and apartments west of Dielman Road to prevent entry of contaminant vapors that may otherwise linger in the homes.

In November 2012, EPA reached a settlement with PerkinElmer, the current owner of 9970 Page Avenue. This settlement, in the form of an Administrative Settlement and Order on Consent, requires PerkinElmer to address the contamination emanating from their property.

An Action Memorandum for work performed at this site in previous years is available on EPA's website.