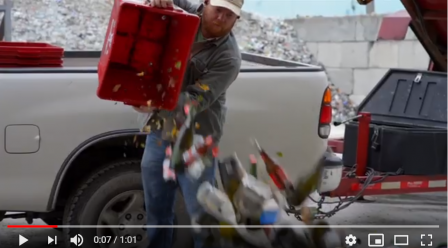 Atlas Glass Video (EXIT)Damon Wittenborn didn’t plan to start the first curbside glass recycling business in Kansas City. But as a home remodeler, he saw glass containers stacked in garages day after day, waiting for a trip to the recycling bin. Kansas City, Missouri, does not offer curbside glass pickup. It’s up to the consumer to shuttle it to a recycling bin themselves or arrange pickup. Most glass, he knew, was hauled off to the landfill with the garbage.

“When I’m remodeling, everything we’re taking out is going into the landfill forever. Recycling glass is a little like paying penance,” Wittenborn said. His company, Atlas Glass, is a feel-good job for him, just like his time as a Marine. Stationed in Cherry Point, North Carolina, he served as an aviation mechanic on the AV-8B Harrier from 1999 to 2004. “I’d say getting out there and being part of the solution is a great way to be and a good continuation of service.” 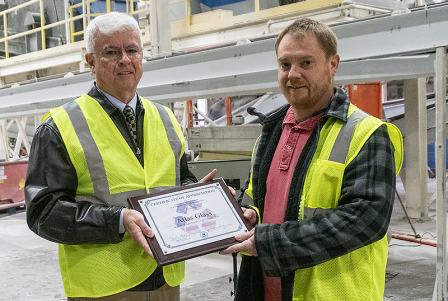 Wittenborn started Atlas Glass in 2012, the year his daughter was born. “So, it kind of all jibed when I thought about leaving a better world for her and doing something that I felt was the right thing to do.”

He explained that serving in the Marine Corps opened his world view and introduced him to the diverse people living in the United States. Now, collecting and hauling up to two tons of glass from different businesses, restaurants and homes three days a week keeps him in touch with the diverse communities in the Kansas City area. On his non-collection days, he’s still remodeling homes. And like military service, the glass collection routine is satisfying in many ways.

“In the Marine Corps, somebody told you when to get up, grab chow, and do your job. After some down time, come back and do it tomorrow. Being part of a big group where everyone is trying to accomplish the same mission is really cool.” Now, instead of working on aircraft, Wittenborn gets up, prints his route, inputs it in his GPS, and heads to Ripple Glass to pick up his trailer. First, he visits restaurants and businesses, then residencies. Serving his community and his partnership with Ripple has focused him on a shared mission once again. 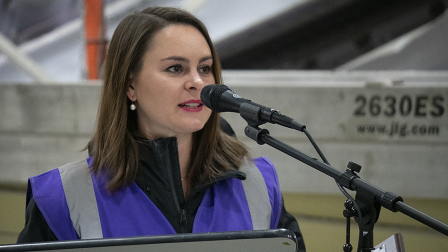 Lydia Gibson, Ripple’s Sourcing Manager, praised Wittenborn for his efforts. “On Ripple’s 10-year anniversary, we celebrate Damon Wittenborn and his desire to serve the community. This same ethic carried him through his service to country.” She explained that Ripple Glass was founded by Boulevard Brewing Company in 2009 out of a similar desire to serve, after conducting research partially funded by an EPA grant.

“Boulevard was generating thousands of bottles that didn’t have a home. So, Ripple was founded out of necessity and a desire to do right by the community,” Gibson said. Once formed, Ripple created both a processing facility and a collection network that now stretches across the Kansas City metropolitan area.

“We have more than 200 purple drop-off bins across the city,” she said. “And after 10 years, we have recycled more than one billion bottles and jars.”

According to Ripple, they have diverted nearly 200,000 tons of glass from the landfill since 2009 – and the operation is growing. Collection sites are in Kansas City, Jefferson City, and Branson, Missouri, as well as Omaha, Nebraska, and Lawrence, Kansas. Collected glass is recycled into fiberglass insulation and new glass bottles. Paper, lids, and other non-glass material is converted into raw additives for concrete. 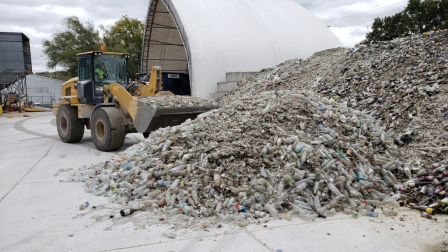 Ripple Glass processing center“When I was first starting this, I thought, my grandparents wasted nothing. I just don’t understand how we’ve become a throwaway society,” Wittenborn said. “Glass is endlessly recyclable. It doesn’t pick up chemicals or particulates. It’s the safest container you have for storing food.”

In 2017, 11.4 million tons of glass was generated in the U.S. and 26.6% was recovered for recycling. Creating glass from recycling materials is usually more cost-effective than using raw materials.

To learn more about glass recycling, visit these EPA pages: