The introduction of the railroad in Missouri during the 19th century drastically altered the trajectory of the Ozark State. Trains replaced the steamboat, allowing for increased efficiency in commercial business. Industry and manufacturing sprung up as trains carried people and goods from Missouri across the country. 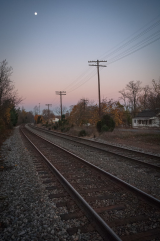 In the following years, Twain may have commented on the changing state of technology as air travel and trucking encroached on railway’s monopoly, just as it had done on river boating. And as all technology evolves, so too has mining and manufacturing, leaving abandoned tracks, railyards and facilities in its wake.

Unfortunately, environmental contamination can be left behind too, complicating redevelopment. However, with help from EPA Region 7’s Brownfields and Land Revitalization Program, communities across Missouri have reimagined these former industrial sites and transformed them from areas of contamination to sources of social and economic benefit.

In the paragraphs to follow, we’ll share the stories of several communities in the state that have successfully redeveloped these former industrial sites.

From Servicing Railcars to Remediation in KC

The site was considered a brownfield. These are properties where reuse may be complicated by known or suspected contamination from a hazardous substance, pollutant, or other contaminant, often from prior industrial or commercial use. EPA’s Brownfields Program was created in 1995 to help communities redevelop these properties.

The 22-acre railyard was one of the first properties in Kansas City redeveloped under EPA’s Brownfields Program. After completing cleanup, a historic preservation architect used the original 1903 drawings to convert the 62,000-square-foot engine service roundhouse into a unique office space, now known as Westside Business Park.

Removal of an underground mixing vat at the Armour Road Superfund Site in North Kansas City.Further north on Armour Road in North Kansas City, the influence of railroads persisted in the form of an herbicide facility. The operation created herbicides that were sprayed along railroad tracks throughout the country. One of the primary ingredients of the herbicide was arsenic, which contaminated the property’s soil and groundwater.

The Armour Road Site was referred to EPA in 1996 and listed on the Superfund Program’s National Priorities List (NPL) in 1999. The city saw an opportunity to transform this former industrial area into a vibrant mixed-use hub, enticing workers and visitors to continue into North Kansas City rather than get on the interstate.

“The city of North Kansas City started with a vision two decades ago, and our goal from the beginning was to help facilitate that vision. This is just what we do. Reuse and redevelopment is part of the Superfund DNA here in Region 7,” said Hoai Tran, EPA Region 7 remedial project manager for the site.

Today, EPA and its partners have completed soil cleanup, the former facility infrastructure has been removed, and the site property has been redeveloped into a medical office, jewelry store, and restaurant. 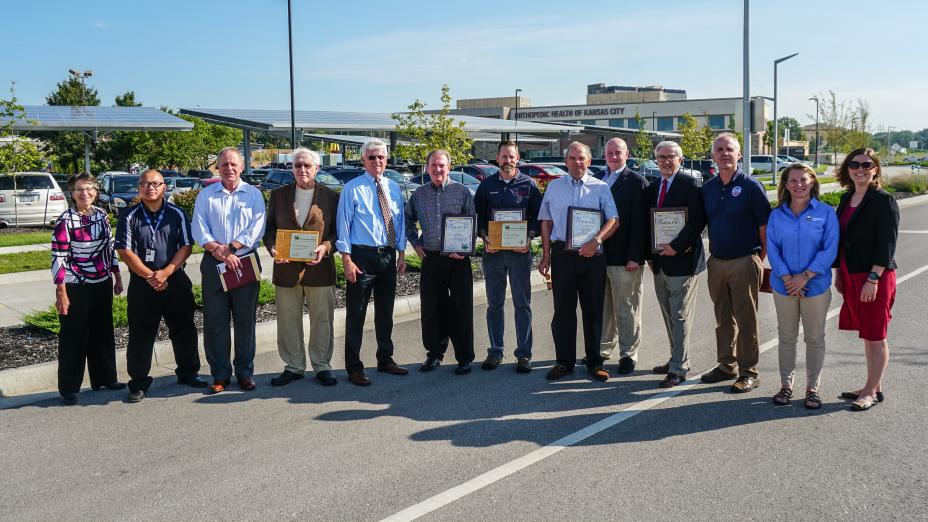 EPA staff and community partners celebrate their work to reuse the Armour Road Superfund Site.“We’re a small community surrounded by Kansas City and we’re mostly built out. This was an opportunity to reimagine North Kansas City for new uses and bring amenities we didn’t have a place for,” said Sara Copeland, community development director of North Kansas City.

A Redevelopment Boom in Springfield

Aerial photo of the former industrial site that would become Jordan Valley Park. (Photo courtesy of the city of Springfield.)Springfield, the birthplace of Route 66, has been working with EPA for over 20 years to revitalize industrial and automotive sites around the city. Springfield has leveraged more than $8 million in Brownfields funding and technical assistance to redevelop mills, bulk oil stations, auto salvage and recycling facilities, filling stations, a quarry, and rail sites. In total, the city has conducted over 300 environmental site assessments.

“Community members wanted it to be a ‘grand civic gesture’ focused on recreation, gathering places, and beautifully landscaped corridors. The idea was that the redevelopment would provide investor confidence in both public and private investment throughout the entire city,” said Olivia Hough, senior planner and brownfields coordinator for the city of Springfield, MissouriExit.

Since then, Springfield has been highly successful in incorporating brownfields land revitalization into broader redevelopment plans. The city’s portfolio of brownfields projects includes Hammons Field – home of the Springfield Cardinals, the History Museum on the Square, the reclamation of the West Meadows former railyard, a health center, many affordable housing developments, and numerous businesses along or near the Commercial Street Historic District.

“EPA’s Brownfields Program has been a key implementation tool in achieving our community’s vision for the city,” Hough said. EPA’s funding and technical assistance has spurred more than $460 million in public and private investments toward the revitalization of former brownfields, with more projects underway. 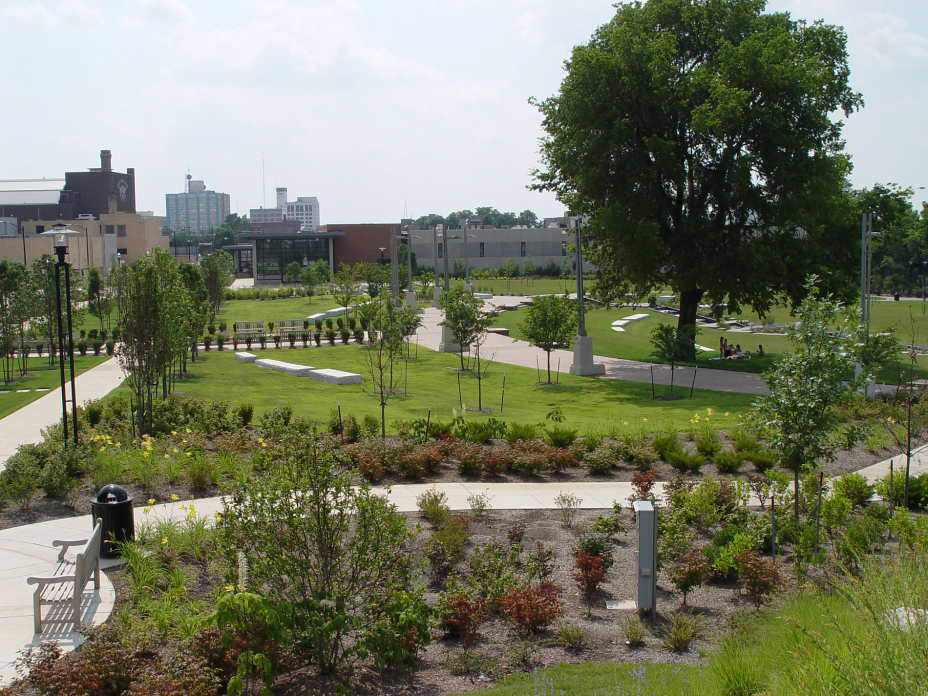 Today, Jordan Valley Park is a thriving community greenspace. (Photo courtesy of the city of Springfield.)Today, over 20 years after plans for Jordan Valley Park kicked off, the city intends to redevelop brownfield sites in other industrial corridors as they look to the next 20 years. One major project will be the revitalization of Grant Avenue Parkway, which will connect the downtown area to the Wonders of Wildlife National Museum & Aquarium with various neighborhoods, parks, and greenway connections in between. 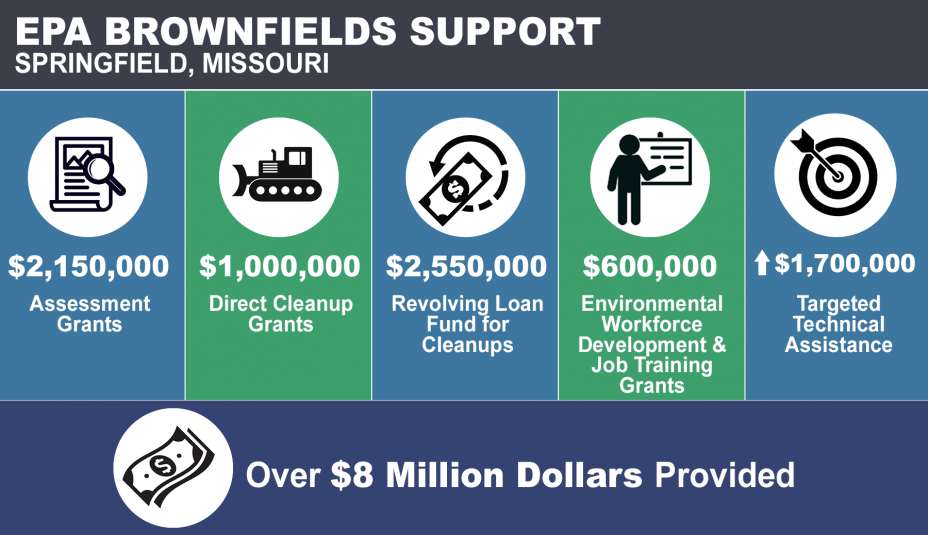 Nearly 100 years ago, Century Electric purchased property in the Prospect Industrial District of St. Louis. The abundant rail lines in the area made it a desirable spot for warehouses and manufacturers of machinery, shoes, and brewing products.

The foundry changed hands multiple times before becoming vacant in 2007. Redevelopment of the property was complicated given the presence of volatile organic compounds, heavy metals, and lead-based paint. However, with help from the state of Missouri, an interested developer was able to put the site back to productive use after environmental cleanup and remediation. 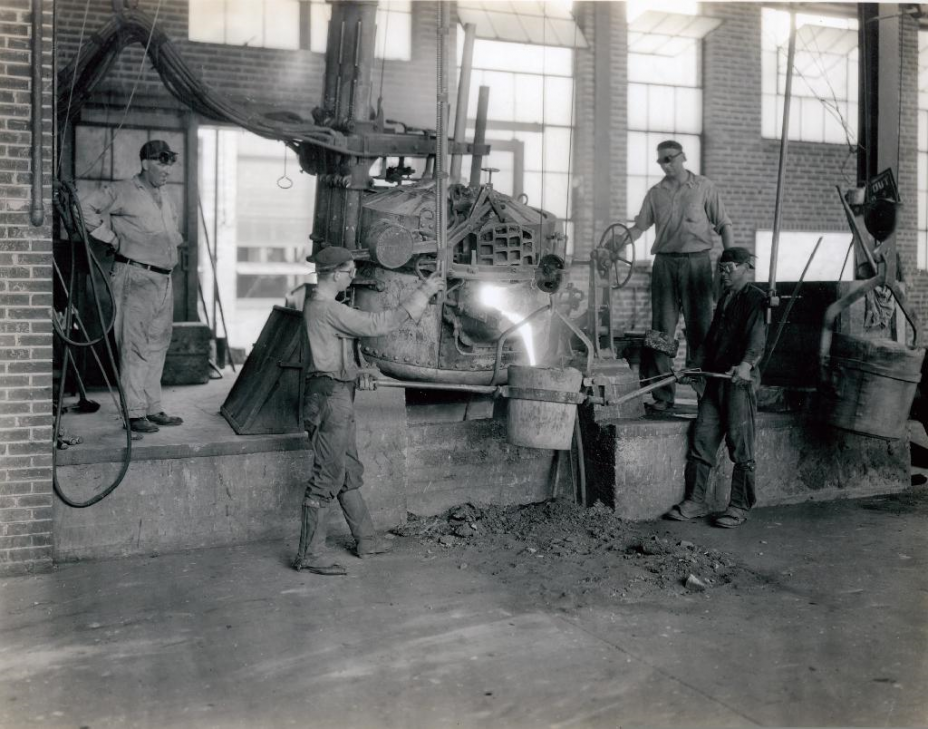 Workers at Century Electric in St. Louis perform a pour. (Photo courtesy of Missouri Historical Society Collections.)The Missouri Department of Natural Resources (MDNR) provided assistance through their Brownfields Voluntary Cleanup Program (BVCP), which is supported by EPA funding for state cleanup programs. State programs like BVCP are authorized by state statutes to address brownfields and other lower-risk sites that are not of federal interest. EPA has historically supported the use of state cleanup programs and provides grant funding to enhance them.

Now, more than a century after Century Electric was founded, the building and its grounds have been cleaned up and are set to open as a public market called City Foundry. Unfortunately, the opening has been delayed by COVID-19. But when the shops, food hall, and entertainment spaces do open, St. Louisans will see how developers have reimagined the foundry’s industrial past for modern use.

“The City Foundry redevelopment will provide more attractions so people will visit the surrounding community and its amenities,” said Christine O’Keefe, MDNR environmental program analyst. “When one property is redeveloped, other nearby sites begin to clean up and take pride in their properties as well.”

Since 1995, Missouri communities have been awarded over $35.5 million for competitive job training, assessment, cleanup, revolving loan fund, area-wide planning, and multi-purpose grants. In addition, EPA has awarded over $19 million to the MDNR State Response Program, which includes the Brownfields Voluntary Cleanup program.

As EPA looks to the past during our 50th anniversary, we celebrate these revitalization successes and look forward to continuing our support of Missouri communities.