This Superfund site was discovered in July 1994 as a result of investigation into a citizen's complaint about gasoline contamination in a well located west of Highway 71 on Quince Road, southwest of the Neosho city limits. Numerous studies conducted since 1994 have indicated the presence of thousands of pounds of solvent-related compounds in multiple areas of the site. Causes of the contamination (primarily trichloroethylene or TCE) have included placement of waste solvent into unlined lagoons, leaks of solvent from manmade structures, and use of the solvent for weed control.

One of the source areas that contributed to the contamination was the Manufacturing Plant Area (MPA), otherwise known as Operable Unit 4 (OU4). The area was used for various activities associated with the testing, manufacturing, overhauling, and storage of rocket engines, jet engines, and associated components.

There are four distinct areas of concern at the MPA:

EPA's short-term and long-term objectives at the Pools Prairie Site include restoring groundwater to beneficial use, if possible, and preventing any further human exposure to contaminants.

An excavation is conducted at the MPA former chemical storage area, which is being backfilled with remediated soil from the landfarm. (U.S. EPA photo by Todd Campbell)These objectives are being met at the MPA by removing the source(s) of the contamination via excavation and landfarming of contaminated soils, and installing two different treatment technologies: a soil vapor extraction system (SVE), and a biovent system.

The SVE applies a vacuum to soil via a series of pipes buried in the ground. This vacuum pulls air through the soil, which then allows underground solvents to be removed from the subsurface.

The biovent system pulls ambient air from the atmosphere and forces it underground via a series of pipes, wells and a large air compressor. This air is then used by aerobic microorganisms living in the soil, which allows them to flourish and subsequently use the trapped solvents as a source of food, effectively reducing the concentration of subsurface soil contaminants with minimal disturbance.

Landfarming is a treatment technique that involves bringing contaminated soils or material to the surface, or into treatment cells, where it is frequently turned, or tilled, to allow aeration.

The source removal action to address source area contaminants at the MPA began in spring 2015 using a combination of the three different processes to achieve cleanup goals. 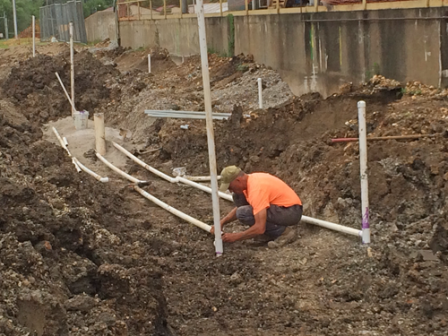 A contractor for the Potentially Responsible Party assembles horizontal SVE piping in the upper residuum of the soils near the MPA. (U.S. EPA photo by Todd Campbell)To date, approximately 7,500 cubic yards of contaminated soil has been excavated and landfarmed, where it was processed until the solvent concentrations in the soil were low enough to allow the material to be placed back into the excavated area. The SVE and biovent systems were constructed during summer 2015 and placed into service during fall 2015. Both systems are currently undergoing regular monitoring and management to maximize efficiency and to ensure that the site cleanup goals are met in a timely fashion. This removal action is anticipated for completion in 2017.

Site documents are available for the public to review at the following locations:

If you have questions or need additional information, please contact: