In this Supplemental Information:

This Supplemental Information addendum provides an update about ongoing work being conducted by the Potentially Responsible Party (PRP), Syntex Agribusiness Inc. (Syntex), to address data gaps and reassess human health and ecological risk at the Syntex Facility NPL Superfund Site (site). These data gaps were identified in the 2012 and 2017 Five-Year Reviews (FYRs). Due to data gaps, the FYRs concluded that there was insufficient information to evaluate the overall protectiveness of historic remedial actions.

The U.S. Environmental Protection Agency (EPA) continues to oversee the PRP as it performs the work to address these issues under an Administrative Order on Consent (AOC). Once the work is complete, EPA will have the necessary information to evaluate the remedy protectiveness. For a brief site overview and the results of the 2019 EPA domestic drinking water well survey and sampling effort, see the Site Update Fact Sheet.

Before industrial operations, the site was used for agricultural and recreational purposes. In the 1960s, Hoffman-Taff Inc. owned and operated the facility. Hoffman-Taff produced 2,4,5-trichlorophenoxy-acetic acid (also known as 2,4,5-T) for the U.S. Army. 2,4,5-T is one component of the defoliant commonly referred to as Agent Orange.

In 1969, Hoffman-Taff leased a portion of the facility to Northeastern Pharmaceutical and Chemical Company (NEPACCO) for the production of hexachlorophene, which was once a widely used antibacterial agent. NEPACCO manufactured pharmaceutical-grade hexachlorophene until 1972, when the U.S. Food and Drug Administration imposed strict limits on its use in over-the-counter products and market demand decreased. In December 1969, Syntex purchased the facility from Hoffman-Taff and allowed NEPACCO’s lease to remain in effect.

Dioxin (2,3,7,8-tetrachlorodibenzo-p-dioxin), also known as or 2,3,7,8-TCDD, was created as an unwanted byproduct in the production of 2,4,5-T and hexachlorophene. Chemical manufacturing waste residues were disposed of in several areas at the facility, contaminating the soil and groundwater with dioxin and volatile organic compounds (VOCs). Fish and sediment in the downstream Spring River were also contaminated.

Dioxin, a persistent organic pollutant, is considered by EPA to be an extremely toxic contaminant. Chlorinated dibenzo-p-dioxins (CDDs) are a family of 75 chemically-related compounds, commonly known as chlorinated dioxins. One of these compounds is 2,3,7,8-TCDD. It is one of the most toxic of the CDDs and the one most studied.

The West Area includes a 1.3-acre subarea known as the Trench Area, an area of the site where some manufacturing wastes from the East Area were historically disposed. Some of these wastes contained dioxin. Except for the Trench Area, soil contamination was limited to surface soil. Site-related contaminants also include PCBs and semi-volatile organic compounds (SVOCs), such as 1,4-dioxane.

EPA added the Syntex facility to the Superfund program’s NPL in 1983. The NPL is a list of the nation’s hazardous waste sites with the highest priority for cleanup. In a 1988 Record of Decision (ROD), EPA selected the remedy for dioxin-contaminated soils and equipment. The remedy included:

Between 1988 and 1990, and in accordance with the ROD, as amended, four identified areas of dioxin-contaminated surface soils were excavated and incinerated. Disposal of the contaminated equipment was completed in 1996.

In a 1993 ROD, EPA selected a remedy of “no further remedial action” for groundwater at the site, since off-site contamination was within the range of relevant EPA health-based standards. The groundwater assessment was based on water quality sampling from monitoring wells installed on the site. The remedy included:

Syntex collected groundwater samples from East Area monitoring wells twice a year from November 1997 through May 1999 and submitted a risk assessment, which concluded that there was not a complete exposure pathway because the groundwater discharged to the Spring River. Between 2003 and 2012, Syntex continued to collect groundwater samples on an annual basis.

Additional information about the site, including site background, human and ecological impacts, and information on the contaminants of concern, is referenced in the Additional Resources section.

EPA conducts regular checkups, called Five-Year Reviews (FYRs), at certain Superfund sites where cleanups have been completed. FYRs are required by the Comprehensive Environmental Response, Compensation and Liability Act (CERCLA), or Superfund Law, when hazardous substances remain on-site above levels that permit unrestricted use and unlimited exposure. FYRs provide an opportunity to evaluate the site remedy to determine whether it remains protective of human health and the environment. FYRs also include an examination of relevant site documents since the last FYR and a site inspection. EPA has conducted five FYRs of the site’s selected remedy. The most recent was completed in 2017. The review summarized field data collected since the last FYR and assessed its impact on the protectiveness of the remedy.

The Fourth and Fifth FYRs, completed in 2012 and 2017, found that when the Remedial Actions for soils, groundwater and surface water were implemented, they were protective of human health and the environment. However, the FYRs concluded that the overall protectiveness of the remedy could not be determined without additional information. This was due to changes in the methodology, assumptions, and toxicity values used for risk assessments that occurred after the remedies were selected.

EPA sampled two, nearby domestic wells as part of its data collection and assessment activities for the 2017 FYR. The FYR reported that one well had no detections of site-related compounds. In the second well, the only site-related compound detected was 1,4-dioxane at 0.11 micrograms/liter (µg/L). However, this level did not exceed EPA’s Health Based Standard of 46 µg/L, which is based on the EPA’s Removal Management Level. 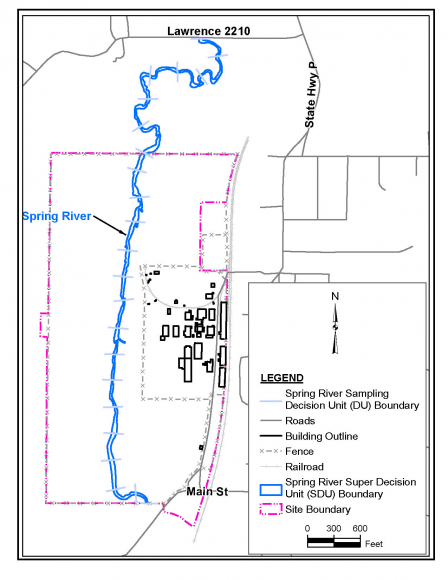 Figure 3 – Sections of the Spring River where composite samples were collected.ONGOING SITE INVESTIGATIONS

In 2017, with oversight by EPA, the PRP began conducting the additional site characterization and risk assessment activities described in the AOC. The following is a brief synopsis of those activities conducted and reported to date. In addition, EPA will continue to provide updates regarding the work being performed in subsequent outreach materials, as more information becomes available.

In July and August 2017, sampling was performed to characterize the concentrations of dioxin and dioxin-like compounds (DLCs) in sediment in the Spring River at the site. The Spring River was divided into 300-foot-long segments. A composite sample was collected from each of the 24 segments. See Figure 3 at right. Dioxin was detected in one of the composite samples at 1.1 parts per trillion (ppt), which is just above the detection limit of 1.0 ppt. Four DLCs were detected in several locations at levels that are insignificant, as they are far less toxic than dioxin, and two were also found at the background sample location.

In December 2017, the PRP reported the results of the Screening-Level Ecological Risk Assessment. It determined that for the Spring River section of the site, the estimated risk to mammals, birds and fish – due to dioxin and DLCs – is within applicable standards. 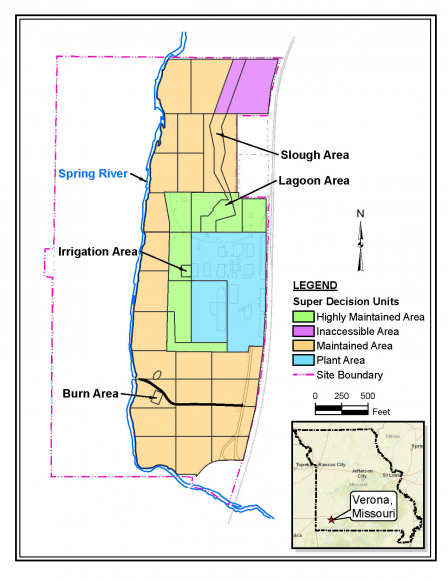 Figure 4 – Super Decision Units in the East Area.In October 2017, sampling was performed to characterize the concentrations of dioxin and DLCs in surface soils (0- to 4-inch depth) across the East Area. An incremental sampling methodology (ICS) was used to collect 126 soil samples, each composited from 30 discrete soil plugs. ICS is a sampling technique used to estimate the mean contaminant concentration across an area.

There were 41 discrete areas sampled, called Decision Units (DUs), generally ranging in size from 1.4 to 4 acres. Based on potential exposure scenarios, the DUs were grouped into four Super Decision Units (SDUs). See Figure 4 at right.

Those SDUs and their most likely potential receptors were as follows:

The investigation and human health risk evaluation indicate that the remedy for shallow soils in the East Area remains protective of human health.

The West Area includes a 1.3-acre subarea at the Syntex Facility Site known as the Trench Area, where some manufacturing wastes from the East Area were historically disposed. Some of these wastes contained dioxin. 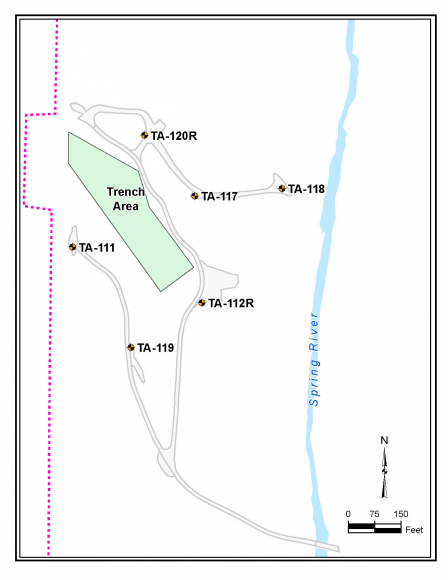 The new wells were installed to produce enough water for sampling. Between March 2018 and May 2019, the monitoring wells were sampled six times on a quarterly basis. Samples were analyzed for VOCs, SVOCs, including 1,4-dioxane, dioxin and DLCs, and hexachlorophene. Dioxin was not detected in any of the samples. One DLC was detected at a low level in one sample from one well. However, this DLC is common in the environment and associated with forest fires and combustion products. 1,4-dioxane was found in three of the four wells sampled at low levels. Low levels of several other VOCs or SVOCs were also detected. Water production from two of the monitoring wells was insufficient for any samples to be collected. Both wells were replaced in August 2019. To date, the replacement wells have not yielded enough formation water for sampling.

The PRP is currently preparing a work plan to conduct additional sampling of the productive monitoring wells.

The purpose of these groundwater investigations is to evaluate the protectiveness of EPA’s 1992 remedy. In selecting that remedy, EPA had determined that the pathway to any potential receptors was incomplete and risks were within an acceptable range. 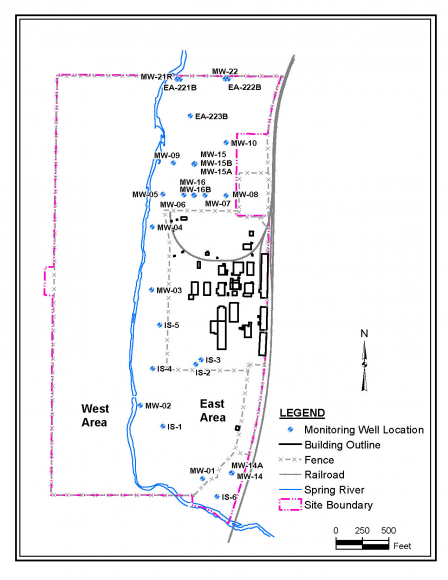 The bedrock beneath the Spring River alluvium is the limestone of the Springfield Plateau aquifer. In this area, the Springfield aquifer is not a major source of water recharge to the underlying Ozark aquifer.

During the initial rounds of monitoring well sampling under the AOC, from 2016 to 2018, samples were collected and analyzed for VOCs, dioxin and DLCs, SVOCs, including 1,4-dioxane, and hexachlorophene. Neither dioxin nor hexachlorophene were detected in any of the samples. Chlorobenzene and 1,4-dioxane were found at levels of concern. However, the chlorobenzene was detected only slightly above the relevant EPA standard at only one well. 1,4-dioxane, however, was found in several monitoring wells across the north part of the site at levels as high as 1,730 µg/L.

A phased approach using DPT was then implemented to define the potential source(s), magnitude and extent of the 1,4-dioxane in the groundwater. In the initial phase, samples were also analyzed for chlorobenzene. But after sampling at 41 locations, it was determined that the chlorobenzene was localized near MW-06 (see Figure 6 for MW-06).

In the subsequent phase of the DPT, groundwater samples were analyzed only for 1,4-dioxane. 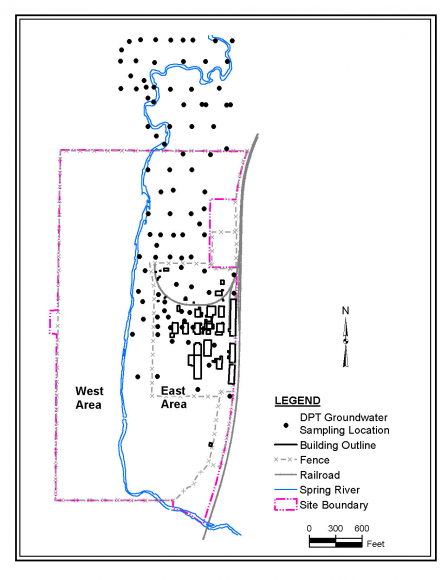 Figure 7 – DPT groundwater sampling locations.In total, 96 DPT locations have been sampled. At each location, groundwater samples were collected at one to three depths, depending on the thickness of the Spring River alluvium (see Figure 7 at right). The maximum 1,4-dioxane concentration found was 13,100 µg/L, collected from shallow groundwater within the Plant Area.

The results of the DPT groundwater sampling indicate that the plume of 1,4-dioxane is migrating generally to the north in the direction of the groundwater flow and migrates down into the upper bedrock aquifer as it moves away from the facility. In addition to the groundwater samples, soil samples and geophysical techniques are being used to characterize contaminants in potential source areas and assess the properties of the aquifers. The East Area groundwater investigations will continue until the extent of contamination is determined and potential source areas have been identified.

In response to recent investigations that identified 1,4-dioxane in the groundwater and the public’s concern that site contaminants might be present in their domestic wells, EPA initiated a large-scale domestic well water sampling program in 2019. EPA sampled over 105 private, domestic drinking water wells for site-related contaminants, and none of these results were above the relevant EPA health-based standards. For a brief site overview and the results of the 2019 domestic drinking water well survey and sampling effort, see the Site Update Fact Sheet.

EPA and the state encourage members of the community to ask questions and report any concerns about the site. If you have questions about this Supplemental Information, need additional information, and/or would like to receive site updates, please contact EPA: