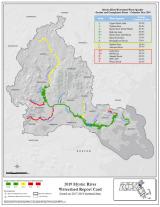 EPA produced a watershed map for 2019 that identifies areas in the watershed where water quality is generally good and generally needs improvement.EPA has been assigning a report card grade for the Mystic River Watershed since calendar year 2006. For the last five years, grades have been assigned to 14 individual stretches of the river and its tributaries. Prior to 2014, a single grade was assigned to the watershed as a whole.

Since calendar year 2014, EPA, in coordination with the Mystic River Watershed Association (MyRWA), has utilized an enhanced, more locally-specific analysis of water quality in the Mystic River Watershed to better illuminate environmental conditions for the public. Instead of one grade for the entire watershed, EPA and MyRWA now issue grades for each segment of the watershed, totaling 14 separate stretches of river and its tributaries. The same grading system applies (see below), but now an average between the overall percentages that water quality met the state criteria for swimming and boating (for the Aberjona in 2016, it was 61.8%) as well as qualitative criteria that are similar to those developed for the Charles River Initiative (see below) are calculated for each segment to produce the grades shown here. 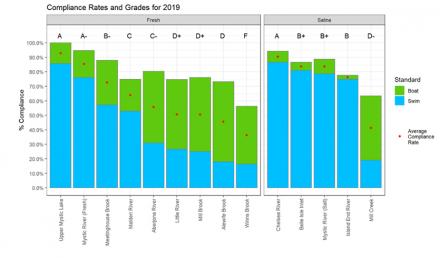 View a larger version of this image.
Figure 1 - Developed and provided by MyRWA.

For more information on how the grades are assigned please read the Frequently Asked Questions and review the data on MyRWA's Website Exit.

Grading Criteria Prior to 2014

When assessing water quality to assign a grade to the Mystic River Watershed prior to 2014, EPA used an average between the overall percentages that water quality met the state criteria for swimming and boating (for 2013, it was 66%) as well as qualitative criteria that are similar to those developed for the Charles River Initiative, as follows:

Mystic River in the News