The National Aquatic Resource Surveys (NARS) generate nationally-consistent water quality data across a variety of indicators. States have applied the NARS data to help address local policy questions and to implement changes regarding the management of their aquatic resources. The following are some examples of applying the NARS data.

In the late 1990s, the NMED developed a sedimentation/siltation assessment protocol for the purpose of identifying sedimentation (i.e., stream bottom deposit) impairments to aquatic life uses. Prior to development of this protocol, the state CWA §303(d) list determination was generally qualitative. The protocol was developed to determine whether or not an impairment was occurring due to excessive sedimentation and provide enough information to develop subsequent total maximum daily loads (TMDLs) in rapid fashion.  Some issues with the protocol surfaced regarding the origin and appropriateness of the percent fines cutoff of 20% within a riffle habitat, identification of a representative riffle, identification of a specific reference site for comparison vs. identification of a reference condition, and the use of a full benthic macroinvertebrate rapid bioassessment protocol index or the New Mexico Stream Condition  Index neither of which were developed to specifically identify potential impacts on benthic macroinvertebrates due to excessive sedimentation.

In 2008, NMED in cooperation with EPA Region 6, EPA Office of Research and Development Western Ecology Laboratory and Tetra Tech Corporation embarked on a stepwise development approach, as described in Framework for Developing Suspended and Bedded Sediments (SABS) Water Quality Criteria, USEPA 2006, with the goal to propose numeric translators for New Mexico’s narrative sedimentation water quality narrative standard, NMAC 20.6.4.13, in lieu of actual water quality criteria. This project was made possible in large part due to the development of the EMAP monitoring and assessment methods (now incorporated in the National Rivers and Streams Assessment [NRSA]), data from the NRSA, and from the earlier EMAP-West project, among other datasets from the state.

Over the past year, Vermonters saw major changes in shoreland management practices, thanks in large part to the National Lakes Assessment (NLA). Vermont’s Department of Environmental Conservation (DEC) used NLA data not only to support recommendations for changes in legislation but also to justify development of “Lake Wise”—a technical assistance program for shoreland stewards. 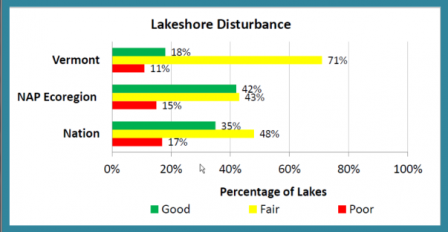 A comparison of Vermont’s lakeshore disturbance status with that of the ecoregion and nation, based on the 2007 NLA.

Neil Kamman, Vermont DEC, noted ‘It was the findings of NLA 2007, and specifically the overdraw results from Vermont, as compared to regional and national conditions that provided the first major scientific piece of information that caught our legislature’s attention.’

Data from the 2007 NLA showed Vermont lagging behind other states in the ecoregion and nation in protecting lakeshores. The low percentage of Vermont lakes categorized as “Good” raised concerns in the Green Mountain State. Furthermore, since the 2007 NLA identified disturbed shoreland as a major stressor, Vermont’s degraded shorelines were clearly a serious environmental concern.

Two additional NLA-related finds helped to convince the Vermont legislature to take action: 1) a Vermont-based study, planned in conjunction with the 2007 NLA, showed that replacing native shoreline vegetation with lawns dramatically reduced the quality of littoral habitat; and 2) a comparison between Vermont’s and Maine’s littoral habitat quality, undertaken along with the 2012 NLA, demonstrated the effectiveness of Maine’s shoreland protection measures. After a statewide educational effort during the summer of 2013 (dubbed a “traveling road show”), the Shoreland Protection Act became law on July 1, 2014. 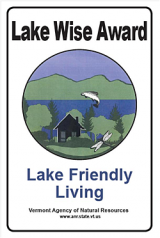 Lake Wise complements regulations by focusing on improving the management of existing development on the 45 percent of Vermont shorelands that do not fall under the jurisdiction of the Shoreland Protection Act. Properties designated as Lake Wise serve as demonstration sites to teach others good shoreland management, encouraging a new social trend in lake-friendly shoreland practices.