The 2007 National Lakes Assessment (NLA) was the first statistical survey of the condition of our nation's lakes, ponds and reservoirs. Based on the sampling of over 1,000 lakes across the country, the survey results represent the state of nearly 50,000 natural and man-made lakes that are greater than 10 acres in area and over one meter deep.  Lakes were sampled for their water quality, biological condition, habitat conditions and recreational suitability. Field crews used the same methods at all lakes to ensure that results were nationally comparable. For many of the indicators, scientists analyzed the results against a reference condition. Reference conditions were derived from a set of lakes that were determined to be the least disturbed lakes for a region.

The NLA compares the biological quality of lakes, ponds and reservoirs in different parts of the country. Download the full report to read the results of this analysis. 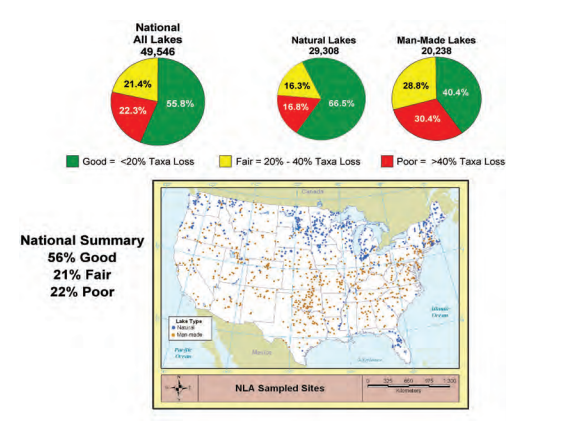 Click to see the biological condition of lakes across the country.