In the summer of 2013, the Alaska Department of Environmental Conservation (DEC) participated in EPA's National Lakes Assessment. This survey was the second of a five year series of aquatic resource surveys within the Arctic Coastal Plain (ACP) of the National Petroleum Reserve, Alaska. This survey assessed freshwater lakes; other ACP surveys included wetlands, rivers/streams and coastal waters. DEC partnered with the University of Alaska Anchorage Natural Heritage Program to share resources, save logistical costs and allow more sites to be surveyed. DEC sampled all of the same indicators as the NLA 2012, except the pathogen indicators. 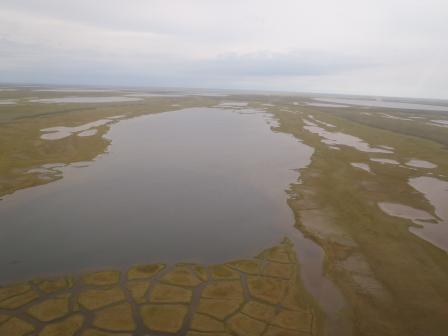 Typical lake and wetland areas of the Arctic Coastal Plain in the National Petroleum Reserve, Alaska. Photo: Dustin Merrigan, University of Alaska Anchorage, Alaska Natural Heritage Program.For the purposes of this study, the sample population included freshwater lakes and ponds greater than one hectare in surface area and with a minimum depth of one meter. Approximately 35,000 lakes with a total surface area of 744,361 hectares were identified in the study area. To relieve concerns from local communities regarding helicopter interference with subsistence hunting, a buffer was created around high subsistence use areas and sites within the buffer were excluded. DEC randomly selected 30 different lakes in the region that met study requirements, but were only able to sample 24 of these lakes.

Alaska’s limited infrastructure, small population and remoteness mean that randomly selected sites are generally in reference or near reference condition.  Because a range of disturbance is needed to understand condition, DEC selected an additional 11 lakes with potential impacts (“targeted” lakes) to be surveyed. Not all of the data have been analyzed for this survey. The results below are a subset of the information that will eventually be available on the Alaska DEC website.Exit. 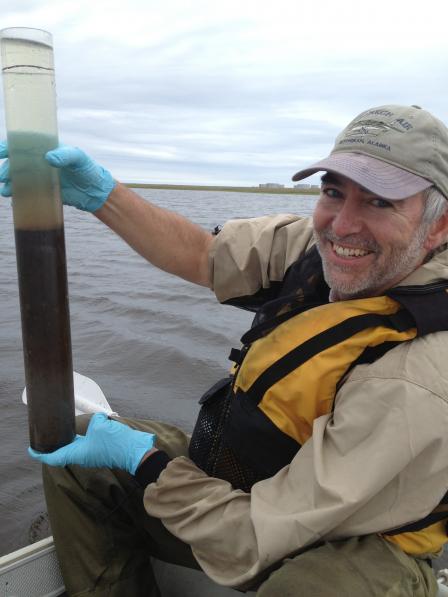 Dan Bogan of the Alaska Natural Heritage Program collects a sediment core sample. Photo: Amber Bethe, Alaska DEC.In this area, 88% of the randomly selected lakes and half of the targeted lakes were clear to bottom and all lakes were oligotrophic using the secchi depth threshold. The mean dissolved oxygen level for both the randomly selected and targeted lakes in the National Petroleum Reserve was 11 mg/L and none of the dissolved oxygen values were below the highly disturbed category threshold for any ecoregion in the National report.

None of lakes had any large or small trees in the canopy, which is typical of this area (see photo). The understory vegetation for all lakes was also sparse and deciduous. A more complete analysis and reporting is planned for the complete set of indicators and will be available on the Alaska DEC website.Exit