Regional Highlight - Mercury in Fish Tissue in the Pacific Northwest

In conjunction with the National Lakes Assessment 2012, a regional study of mercury in lake fish tissue was conducted in the Pacific Northwest (PNW) states of Idaho, Oregon and Washington. The objective of this study was to determine concentrations of mercury in recreational fish species in order to establish a baseline condition for the region. 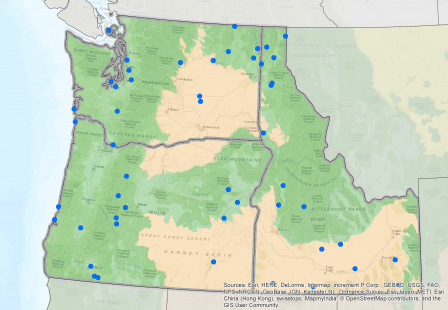 Figure 1. Locations of the 50 sampled fishable lakes for the Pacific Northwest states shown in the Western Mountains (green) and Xeric (brown) NARS ecoregions.The lakes of interest for this mercury study were those used for fishing. The list of NLA sample lakes was restricted to a ‘fishable’ target population of lakes that have public access with ability to harvest fish legally, and contain at least one fish species known to be commonly consumed by anglers.

The final sample set of lakes consisted of 50 lakes (16 or 17 in each state) (Figure 1). Fish were collected from these lakes over three field seasons, from 2012 to 2014. Fish of 13 different species representing four fish families were used in the analysis. Most fish were either trout or bass. Fillet (muscle) tissue was analyzed for mercury (EPA method 7473). The arithmetic mean fish tissue mercury (Hg) value was calculated for each of the 50 lakes. Lake weights were used to calculate results for an inference population of 905 fishable lakes across the PNW. 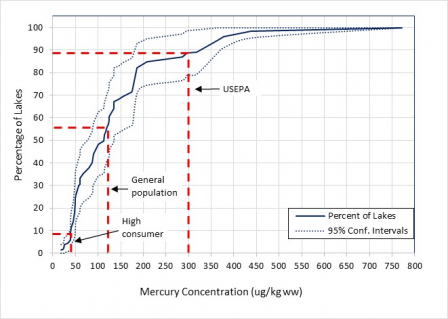 As shown in Figure 2, the USEPA human health screening criterion was exceeded in an estimated 11% of the fishable PNW lakes. The most stringent screening value representing high consumers was exceeded in 91% of the inference lakes.

Comparison to a Nationwide Baseline

Results of this study were compared to the 2000-03 nationwide study of contaminants in fish tissue. That study’s results were based on a probability sample of 500 lakes stratified by lake size. Mercury was analyzed from composite fillets using method USEPA1631. As with the PNW 2016 results, mercury was found to be ubiquitous nationwide, present in all predator samples. However, nationwide results had higher mercury concentrations than the PNW study. The EPA criterion was exceeded in 49% of the inference population of lakes in the national study, versus 11% in the PNW lakes.